HELP! Airbnb had just decided to close down my "hosting" portion of my account not the travelling while my account was currently being suspended for 30 days from a recent 1 star review

A guest had cancelled their reservation on me the last second. Demanded a full refund but we explained how.the strict policy we have in place works.

He retaliated by leaving a 1 star review that only says he doesnt like how the strict policy works and nothing to do with me and the reservation. Initially I told airbnb the situation and said a guest shouldn’t be allowed to leave a poor review when the substance isn’t relevant to their stay which didn’t even happen.

They said it doesnt go against their review policy which says different when I read them.
After that my account was suspended for 30 days. During that period I had three other guess leave 5 star reviews back to back.
Last night received an email last night saying they have closed down just my hosting account and not traveling.
I had asked a specialist about it which he said I could try to appeal it. I told him what’s going on recently and how I have good intentions to make everything right to be a good host. I had spent a huge amount of time and money with renovation work while my account was placed on a 30 day suspension.
I’m curious if anyone else has ever dealt with a situation like this before and what did they do and the results of it or know if a similar situation.
I did realize I had an old account I never used but it set up from a long time ago before I became serious with the account I’m using now. I never listed or used it before but it’s there and gives me the option of creating a list.
In the worst case scenario that airbnb doesnt consider my reappeal and being able to lift the closed hosting part of my account what would be my next possible options if I try to make this work with Airbnb.
Should I just delete this account all together and try to use and build up the old account I have that I never use?

In the link I have screenshots of the messages I received from an email and messages of what the airbnb specialist told me.
In the second link i have screen shots of what my current account appears as. Then i have images of how the old account looks like “Angus”. Any tips or suggestions or anything would be greatly greatly appreciated.


[Album] Airbnb had closed my account because of recent poor reviews for 30 days but... 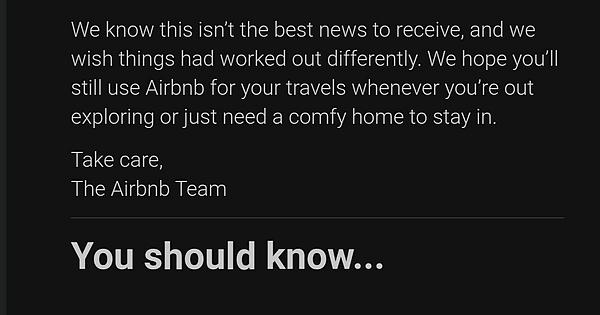 If you do a search on this forum for “AirBnB Twitter” you’ll get more info.

I find it absurd that they would expect you to happily continue using Airbnb for travel after their illogical reaction to your hosting review issue.

I know, it’s like a big FU but please remain part of the “community”

I would go with @NordlingHouse’s suggestion. But do it on Air’s Twitter and Facebook pages. You can always use that other account as a “plan b”.

Air’s PR team seems to monitor social media actively and often seeks to resolve such issues where their “usual teams” will not help at all and are under-staffed.

“As you know, your host account has been suspended multiple times over the past year.”

This is saying the deactivation isn’t just due to a one-time event. Maybe you’re new and were just unlucky with a couple of guests, but if not, then you’re not likely to fair any better with a different account, at least not after a few months. Either way, you need to come up with a plan to fix what’s causing your low ratings, otherwise, you’ll be in the same position again a year from now.

“As you know, your host account has been suspended multiple times over the past year.”

Oh… I did not click on the image to see that.

The devil is in the details.

@Achilles666 If you’ve gotten recent 5 star reviews, it sounds like you’ve tried to address the failings that got you the low reviews, so kudos on that. If you really wanted to stay on AirBNB, you could continue to fight. If the guest didn’t even stay at your listing you could escalate and maybe have that review removed, but WHY? I would suggest that you just delist from AirBNB and list on a different platform. Start anew. Why use a platform that is clearly kicking you to the curb? 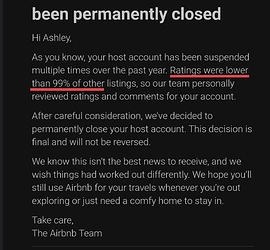 To recap the week that this has been, AirBNB is now:

This is saying the deactivation isn’t just due to a one-time event.

I have no interest in helping hosts circumvent the Airbnb system

If these renovations are your stay, then I would absolutely start from scratch. This went from “crappy builders grade entry level” to “hey that looks pretty sharp”. This will be much easier than trying to get your rating average up to 4.8 +.

Also, take a long, hard and honest look at WHY people gave you 1-4 stars. Don’t take it personally. Fix everything before you re-open.

the judge and the jury.

Yes, and in this case, the executioner.

What happened in the past here?

That is the real question, isn’t it? It could just be bad luck, but it could be that the listing or hosting style just isn’t compatible with Airbnb. Starting fresh on Airbnb without a real plan to correct the previous issues just isn’t likely to have a happy ending.

What happened in the past here?

I don’t care. I don’t think being an airbnb host is that difficult. I can’t imagine being suspended multiple times. Yes, I have my biases, well documented here. I have no help to offer but I’m not going to interfere with those who wish to do so.

Yes it’s insane
I put so much money into this

Oh interesting…I’ll look into that before resorting to plan b which is where im at now. I’m just unsure on the correct way of doing it without getting caught

No that’s not the case. This Is the first time I had been placed on a suspension period. I have had my account placed on a 7 day pause period twice around the beginning when I first started. The first first time it was paused it was an error in their system which they were apologetic for which they try to fix by giving me 200 dollars fo compensate for the lost bookings. The second time I guess my rating fell down a little bit. So technically my listing was paused once before for seven days in the past and that’s it.

I was put on pause for 7 days technically just once, that’s it. Look at the reply above…

I have. Mostly it’s from guest not getting their way or trying to retaliate…I went the extra mile, installed a pool, deck, renovated the inside the whole 9 yards and bam I was closed down. I was determined to have the best listing to offer in the area

I done my research. Airbnb is the highest traffic platform there is with reasonable service fees.

I dont want to give up