Airbnb announces latest effort to do as little as possible

Last month Brian Chesky, Airbnb’s CEO and Head of Community, announced a set of safety directives that represent the most important trust innovations in our history

Well, the best part is this hyperlink that they include in their own press release that takes you to Chesky’s twitter page where someone has posted photos of their trashed listing and is an endless stream of complaints from hosts and guests

“continuing to strengthen our technological and human interventions to help hosts in stopping these events before they start.”

I clicked the same hyperlink, read the same comments, thought the same thing! But if it’s true that it’s only .05% of stays that have a “reported safety issue” I can see why they devote so few resources toward addressing the problem.

But if it’s true

But there is no way of knowing how they are calculating the numbers. There are so many stories from guests and hosts that end with, basically, “then they just closed the case and ghosted me”. I imagine those cases weren’t added to the “reported safety issue” numbers.

I wonder if we will know more after they become public. I, too, suspect they have a lot to hide.

@KKC - The award for the best forum title goes to …

To hosts, this part seems good:

These new Guest Standards create a clear and actionable enforcement framework for these scenarios and if it is determined that a guest has violated the new standards, the first violation will result in a warning and required education on Airbnb rules. Further violations may result in account suspension or removal. Airbnb will accept information directly from hosts as well as from neighbors via our Airbnb Neighbor Tool or the forthcoming Airbnb Neighbor Hotline.

However, I just don’t see that they’re going to change the quality of their investigative techniques which might be nothing more than a poorly-trained contractor in another country without proper command of the host/guest language interpreting only hearsay.

All of those things should already be within the existing framework. But they will get a warning and more chances which may result in suspension or removal. But I agree it’s better than literal nothing and it’s not like I have a much better idea. There are many complaints of lying unfair hosts as well so determining whose version is the truth is the rubbing point.

All of those things should already be within the existing framework.

Yes, they should, and notice that they don’t say anything about compensation to the host for anything. At the very least, any guest found in violation should not be allow to review the host, and getting evicted for any of these should not result in a refund to the guest. However, some of these also represent real costs to the host that guest should be responsible for, but Airbnb isn’t even saying they’ll change their broken security deposit policy.

Simple things that hosts have been asking for for a long time like a true deposit and review reform are still not mentioned. Those would cost Airbnb nothing other than time investigating allegations it should already be investigating.

So all the things we’ve been telling them for YEARS are problems. And this doesn’t sound like they’ve actually changed or implemented anything new. They’re just making it an official hand slap for doing a verboten thing.

They still won’t believe us without video proof. How am I going to prove a smell?

But they will get a warning and more chances which may result in suspension or removal.

So the guests are given a “two strikes you’re out” even though they knowingly violated the rules to start with, yet hosts are instantly suspended or delisted based upon any claim a guest makes regarding safety, bedbugs, discrimination, etc, even if the claim is a blatant lie.
“Guests- you are only allowed to trash a house and disturb the entire neighborhood twice. After the first time, we’ll warn you, after you trash the second house, you may be banned.”

After the first time, we’ll warn you, after you trash the second house, you may be banned.”

And your welcome to just make a second account and away you go again.

They still won’t believe us without video proof. How am I going to prove a smell?

Pretty sure the next iphone will have that function.

Pretty sure the next iphone will have that function [smells]

So all a guest will have to do is pass gas next to the iphone and they’ll get a refund for a horrible smell in the home!

Recent LAT article on the changes. 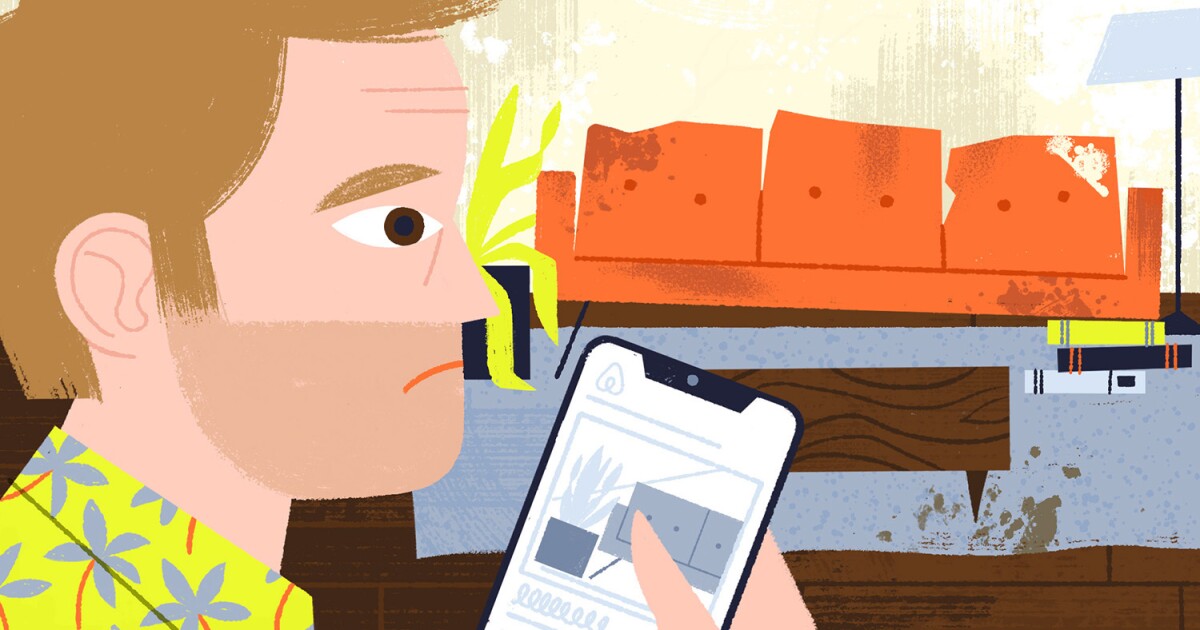 An Airbnb host and guest reach an impasse that leaves neither happy.

It’s really reassuring to know that CS on the guest side is just as iffy as on the host side. LOL.

That apartment is probably not one I would book. First, it’s not an owner, it’s a guy with too many apartments. Two, there are several reviews that mention “issues” of one kind or another. Three, 4.84 is near the bottom for me. Clicking on categories I see the lower ratings are for accuracy, cleanliness and check in. These are categories that the host has control over. Lower ratings on value or location I can ignore. It’s very nice looking in the pic though. When I rented a place for my dream vacation in Costa Rica I actually wept with joy when we went in. I can’t imagine what it’s like to go into a rental and be disappointed. Rips? Couch sitting on books? But then it’s unrealistic to call Airbnb within 24 hours. Pftttt.

I’m surprised this story made the LA Times. We’ve heard so much worse here, even from a guest’s perspective.

this story made the LA Times.