Young renter with a bruised ego leaves a low score

I recently had a young man (engineering student with a ginormous ego) who traveled down from Canada to US to rescue his girlfriend (18 yrs old) out of an “abusive relationship” with her parents (who in actuality were probably just parenting her, but I digress) I also have another renter in the house as well and its a shared bathroom. Smarty pants and damsil were unable to determine there was a lock on the bathroom door for an entire week when the other male tenant opened the door 2 inches when girlfriend was in shower. She then made her presence known, he shut the door immediately and saw nothing. We told him had he locked the door this would not of happened, he insisted there was no such lock on the door. We thought maybe someone broke it off and we were unaware so my husband drove over only to find the lock in perfect working condition. Because this was a crystal doorknob with the lock right below it and not your typical knob, he felt like we should have instructions on how to lock the bathroom and have a discussion with the other tenant about walking into the restroom when the door is closed. We disagreed and it went downhill. I wish I could upload a pic of the doorknob here as I did for AirBnB. He said he was going to leave me the worst review possible. He left a “1” in overall and nothing in the other categories or a review with written language. My gripe is I feel this is unfair, I asked AirBnB to remove it as I struggle with location issues and do not want this to bring my average down. They said it “didn’t fall into AirBnB guidelines to remove it.” I guess if he had used foul language I could of made some headway with getting it removed. Just curious if you would have complained about it too?

@drsoos you can add a photo - if you are using a mobile device the icon is in the lower right. 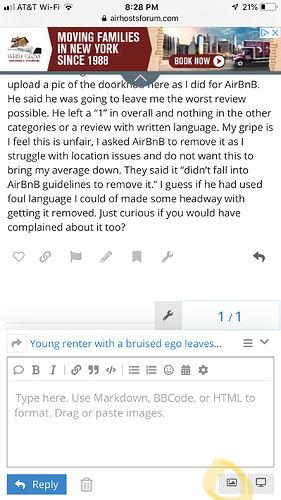 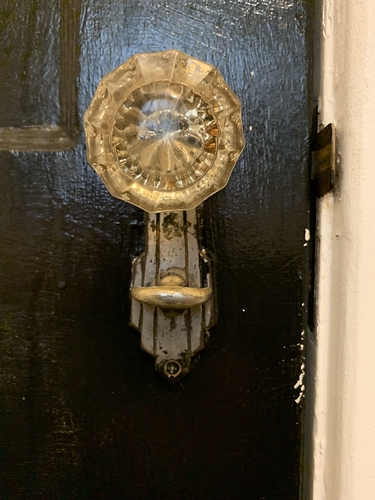 I think I overeacted in posting b/c I just left my review for him tonight and his one star review is not posting on my site, I suppose b/c he left no real dialogue review…

Ok…to be honest I have never seen a lock like this before and would have been perplexed also about how it worked and maybe even thought there wasn’t one. However to give a low star rating because you can’t figure something out that is uncalled for.

If you thought there was no way of locking a bathroom door in a situation where you shared with other guests wouldn’t you have spoken to your host about it though @Cindy_Turner_Dodd?

To me there is nothing else it could be but a lock and that to use it you turn it to lock the door.

his one star review is not posting on my site, I suppose b/c he left no real dialogue review…

That is good news indeed.

We disagreed and it went downhill.

I have to say, even if I thought it was an unfair complaint my response would have been to apologize to the guest, show him how to work the lock, and promise to ask the other guest to knock before entering the bathroom. It seems like this would have made everybody happy at no cost to me.

I can’t imagine arguing the point with a guest (even if I know I am in the right!) until they felt they needed to leave a one star review. Perhaps there is more to the story?

would have been perplexed also about how it worked

Turn to right to lock, turn to left to unlock…

How do you know what his review was before you posted yours?

well, I wouldn’t have figured out there was a lock, honestly! I think I have one of these crystal clear handles in my bathroom at home and never checked if there was a lock. When you mentioned “Lock” i thought there was an actual, physical lock that you buy separately and mount on the door or at least a key in the lock or otherwise instructions. I’m sorry but I agree with your guest on this one, especially if he was a foreigner. In other countries they do have other systems.

If I were you and this would have happened to me, I, as a host, would have apologized and this situation would have been averted. He gave you bad review because you engaged and argued with him. Also, perhaps he would have figured out, but it was the damsel, who didn’t figure this out and of course he took her side.

I can easily envision how this happened.

Kindly allow me to reframe.

Louche picks up an 18 year old tragedienne and puts her in a shared accommodation room to “rescue” her. With me?

Now he is both a randy and a cheap louche.

All of this could have been solved if the host put up a sign: please knock.

He said he was going to leave me the worst review possible.

That’s a threat and most certainly is a violation of the TOS, yet guests do it all the time. Airbnb just does not care. It apparently doesn’t affect their bottom line. Hosts can definitely experience diminished bookings and general decline in business due to these retaliatory and dishonest reviews, but Airbnb must have enough new hosts streaming in, that they can just ignore this obvious ethical issue. ? Something must be offsetting this financial loss for them, since the-if-we-don’t-make-money, then-they-don’t-make-money doesn’t appear to prompt any action on the issue.

I haven’t seen a lock like that, but I wouldn’t have expected a shared bathroom to not have a lock, so I would’ve looked for a lock, and I would’ve figured it out in less than 5 seconds. However, I would’n’t have argued with a guest about it.

That’s a pretty darned conspicuous lock. My grandparents had these in their historical home. I thought you were going to show one of those antique knobs with the tiny push-in pins on the side of the actual knob, because those are quite difficult to see and American adolescents may not have ever experienced them…(I couldn’t even find a pic online)…but your doorknob pictured has a large silver appendage and a latch to boot! You can’t miss it. Who is raising these kids??

The threats of bad reviews happen morealess constantly when bad guests don’t get their way. I had one scream in front of my entire neighbourhood that he would do everything in his power to see me fired by Air (his words). He had been drinking for a week straight.

Violation of TOS? Nonsense. Guests can and do get away with anything they like.

I called AirBnB to inquire about how to handle the review knowing it would be negative. They were perplexed b/c they didn’t see it, I then said I received the email stating he had left one, then they saw that he only left one star and they told me.

I wouldn’t call it arguing. He texted me at 7 AM and explained the situation aski, ng me to ask the guest to knock on the door when the door is shut b/c when a door is shut door its OBVIOUS someone is in there. (ridiculous logic) I then stated “Then lock the door” and “This was preventable if the door was locked.” You may call that arguing but we differ on the definition. He then started in on He would not be talked to like that and he is a chemical engineer and there is NO LOCK on the door. Etc, Etc. Neither me nor my husband argued with him. There was no mea culpa or my bad when he was showed the lock, but just how it was not in the right place and not like the lock on his bedroom (uh yea b/c a KEY doesn’t open this one) and even his girlfriend who is American had never seen a lock like this–I haven’t either except in this 1937 house. He was incredulous.