What are the nicest/funniest reviews you’ve got?

Our family’s favorite feedback is from a businessman who stayed only one night and was very nice and polite. After describing the art sense of our apartment in his review, he ended the message in words: ”I wan’t to live again!”
It has become our family’s slogan, lol.

A year ago, I had a little battle with this real domineering woman who insisted she was going to tell me and the other 5 women what to do from the outset. Told me if I don’t placate to her whims, she will write me a horrible review; I told her if she does I will fry her and make her look like a fool. She wrote a review alright and this was it:

And your reply was…

I have many lovely, detailed reviews. Thanks to this post I went through and re-read them all. A lovely way to get my day started. I don’t have anything crazy funny though. Not even from the fellow who is now working comedy clubs in LA. In the private feedback he did tell me not to use auto-draft in my fantasy football leagues which was one of those “who had to be there” funnies anyway. This is probably the nicest, most detailed review.

one review I received mentioned visiting Llamas … lol we don’t have visiting llamas. they were referring to the neighbours cat as a joke

(Those poor gals…to be stuck on a ‘desert island’ with such a ‘sweetheart’.)

Gotta’ admit though ~ her synopsis was pretty funny!)

And your reply was

The whole thing was funny, because he spoke perfect English and was here giving some kind of lecture in English - I even saw his slides etc. but the review was written very clumsily, so I didn’t quit get it. We did have the love of art in common…

No funny ones; all lovely reviews except for this one (with my reply, attached). This was from a woman traveling with her husband and two teenage daughters. I checked with her via message the day after they arrived (as I always do) and no reply. Two days later, I messaged her, again. She said her daughters found their bed to be very uncomfortable (memory foam and no one has ever complained before!). So I bought a super cushy mattress pad, which I left for them. They put it on OVER the bottom sheet! My guess is that the teenage girls were pissed off because they weren’t staying in the fancy hotel downtown and took it out on the mom, who took it out on me. I love how she tried to find flaws, and did her best to underplay the positives.

How did your host make you feel welcome? Her welcome was in an email with instructions on the lock code and care of the apartment. Was the unit as advertised? Yes- it is very nicely decorated and clean. The pros: very nice decor and well equipped. Cons: air conditioning units are very noisy in the bedrooms. We would have liked to have a washer/dryer in the townhouse but she said it was too small to include this. How was the neighborhood? It was a good location for us to get into town and also to the hiking trails. The immediate neighborhood includes a parking lot leading to an old motel that is now condos, and then the row of townhouses. There was construction that we were not told about that involved loud machinery to dig and install irrigation pipes right outside this unit. This went on each day of our visit, and made it too loud to sit outside. The workers were right outside her townhouse, so there wasn’t much privacy. - we had to keep the shades down.

Response from Sandy:
Well, just goes to show that you can’t please everyone. Please read my other reviews. Caroline said she and her family would be arriving between 3 to 3:30. My daughter gets out of school at 3:30 so I waited until 3:45 but they didn’t get there until later. Irrigation system is now installed (I honestly did not know it was happening until I showed up to clean after Caroline and she never mentioned it to me; didn’t seem to bother the subsequent or current guests as the back deck is on open space and has no grass).

Interesting, this made me realize that I never really go back and reread my reviews, and I should because people can be so nice!

This one made me laugh, this lady from China was just so sweet: 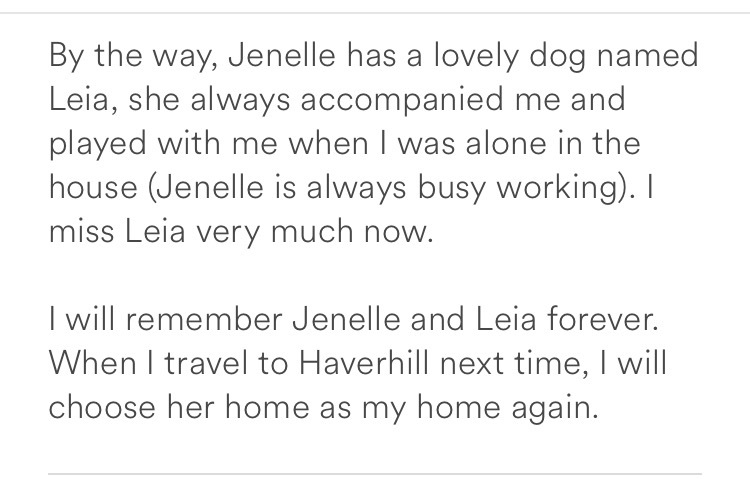 And then this one made me cry, because my dog Sammy passed away in December and this guest helped me with him on the day he died (he weighed 80 pounds and I couldn’t pick him up): 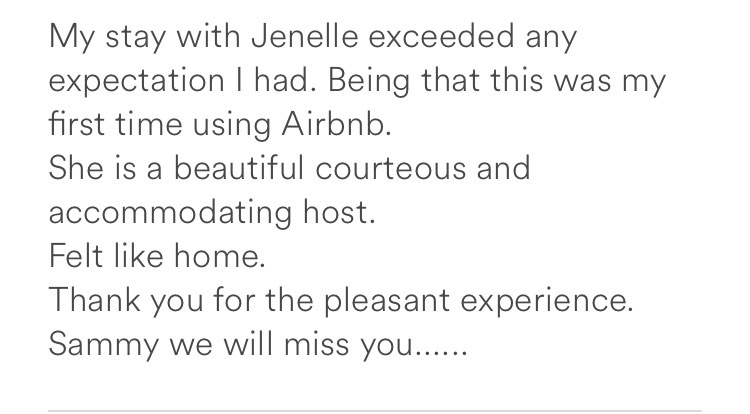 n this one made me cry, because my dog Sammy passed away in December and this guest helped me with him on the day he died (he weighed 80 pounds and I couldn’t pick him up):

How poignant. Just illustrates how being an Air host or hostess

gives us the opportunity to have such rewarding human contact.

This young couple from Paris were staying at my home November 13, 2015. We were all downstairs living room when we first learned of the attacks, my heart just plunged, as it would for any such event, but as I saw their initial reactions, I felt a strong urge to just hold a space safe for them to get through their emotions:

“Our stay at Dorothy’s house was amazing: we met a wonderful person and Dorothy supported us during those bad events happening in Paris. We are sorry this happened during our stay but Dorothy was truly there for us and helping us to handle it. We had good chats and really shared human values. The house was wonderful and positive. The bedroom and the bathroom were so perfect ! We highly recommend Dorothy’s house. We hope to come back during summer ! Thank you again Dorothy, take care :)”

And I got this is private feedback from a 19 yr old young man from NJ who was traveling with his 18 yr old brother on their first getaway from home by themselves, which just goes to show, great guests come in every age bracket, just thought he was funny in these comments since I’m old enough to be his mother, in fact, my son is 14 yrs older than this kid!

“I wanted to leave you a note before we left but we rushed out after accidentally over sleeping a little, that bed was comfortable, could you blame us? But I wanted to thank you again soooo much for a great stay, wish we could have had more time to shoot the shit with you, but hey! I’ll have to come back in the summer and we can hang out river side and I can try going down the bear slide

best of luck in all of your work, see you soon!”

Shoot the shit haha…cracks me right up.

here was construction that we were not told about that involved loud machinery to dig and install irrigation pipes right outside this unit. This went on each day of our visit, and made it too loud to sit outside. The workers were right outside her townhouse,

In all fairness, this would have been a deal breaker for me. But of course I’d have already been in the unit and couldn’t leave.

However! I’m sure your place was half as expensive as the in town joints so they should just suck it up and shut up.

Well, as I pointed out, my place backs to open space so the “construction” would have consisted of digging a couple of trenches to the side and in front of my towhnhome, but no one hangs out in the front as I have two decks that face the back, which is on open space and does not have irrigation. So hard not to sound defensive but, again, I asked if there were any issues or if she needed anything and I didn’t hear about any of this until she posted her review. Honestly, I think she just wanted something to complain about. I know they were out during most of the days and the workers stopped before five.

Actually, I charge a lot per night. If she had asked for a partial refund during the stay, I would have given it to her. She was my only bad review so I don’t dwell on it

Pain in the ass types for sure.

I had a pair of football players write, “You da shit!” on my chalk wall as a thank you message.

And of course I laughed, took a photo, then forgot to remove it, and the next guests were a conservative elderly couple. Oops.

Searchedtobelost was amazing! Such a wonderful welcoming host, she made us feel at home right from the moment we knocked on the door! She showed us around and there wasn’t a thing she skipped telling us about. The room looks much more beautiful than it seems in the pictures, especially the artwork. Super clean and hygienic washroom and super cute pets, we felt like coming back home after a tired exploration of Portland in the day. A very friendly neighborhood, nice places to eat out and the local bar with happy people, that’s all you could wish for to be at home in Portland. Searchedtobelost provided us a travel suggestion list that we could hardly cover because it was exhaustive, we have to travel back there again. All I would like to say is, we had an awesome stay at a very friendly home and loved Portland in all its glory. Thanks Searchedtobelost and family for making it such an amazing first Airbnb experience for us. We are glad that we choose to stay at your place, it was the best decision we made. Hope you had a nice time hosting us

Best of luck! I can see your guest feedback book bubbling with love and smiles. Thanks again! See you!

Wendy was fantastic, she was there when we arrived and gave as a
little tour of the apt. She had many items in the refrigerator already,
like milk, bread, jam and condiments. She really was very sweet, even
had ropes in the closet to use. We had a very enjoyable experience. If I
come to LA again and need to rent this is where I will go first. Thank
you again.

glad you enjoyed the little extras we provide for our guests!

had ropes in the closet to use.

buwahahahahahahahahhhhhhhhhh … !
Just what kind of place are you running??? !!! harhar…

The worst thing was that we have a metal canopy bed so there were places to tie them!

but it was just robes he meant…