US democracy under threat

Just a shout for our US hosts after seeing the appalling scenes taking place in Washington. with the president encouraging violence and anarchy against the election process.

Thank you. It Was more than the national Capital. There were multiple coordinated attacks in separate states at their government buildings including storming one governor’s residence. The events in Washington DC moved the state level events down in the news coverage.

Indeed. I’m most concerned about the obvious collaboration or sympathy between members of the Capitol Police and the insurrectionists. There needs to be serious consequences to restore order and normalcy. Obviously a bunch of snowflakes have never seen a real war so they think they want one. They do not.

Democracy has been under threat during the entire Trump administration, yesterday was just the culmination, or at least I hope that’s the final crap.

I’m most concerned about the obvious collaboration or sympathy between members of the Capitol Police and the insurrectionists.

Wednesday saw a thin deployment of officers as rioters stormed the Capitol. In June, a very different scene unfolded in the same city

It is being noticed outside the US.

Yes, it’s awful. Makes me sick to my stomach. Thank you for thinking of us.

Rentals there must be great for the next few weeks with all the protesters and supporters coming. Capitalism still thrives no matter what.

What gets me is the a-holes who’ve been contesting the election and encouraging these yahoos, like Ted Cruz, then getting up and telling the protesters to stop and go home.

Seems like all their bravado disappears when they are hiding under their chairs in the House and Senate with windows being smashed and shots being fired.

Let’s bring some levity to it!

There is a large traffic jam in Washington DC

A man gets caught in a huge traffic jam in DC. While sitting motionless on the road a man approaches him on foot. The man rolls down his window and asks what’s going on.

“The whole capitol is in chaos, armed men have stormed the Capitol Building and are holding congress hostage, they say they’ll douse the whole place with gasoline and burn everyone inside if they aren’t paid one billion dollars.” He explains.

“Yeah we’re going around all the stopped cars on the roads asking people to chip in for the cause.”

“How much are people giving?”

“About a gallon or two each.”

Thank you; it’s heartbreaking and disturbing.

Isn’t this forum owned by AirBNB?

Why do I have to read opinions on lawful protests in support of our greatest American president, when this is for STR information only.

I want this topic closed or I’m deleting my account?

I figured I’d beat them to it

EDIT 1/16/21: Nostradamus, I am not, but I seemed to call where this topic would head. What I didn’t predict was how some would mistake my humor for reality. Before taking my post too seriously, save yourself some embarrassment and read on.

In a similar vein then 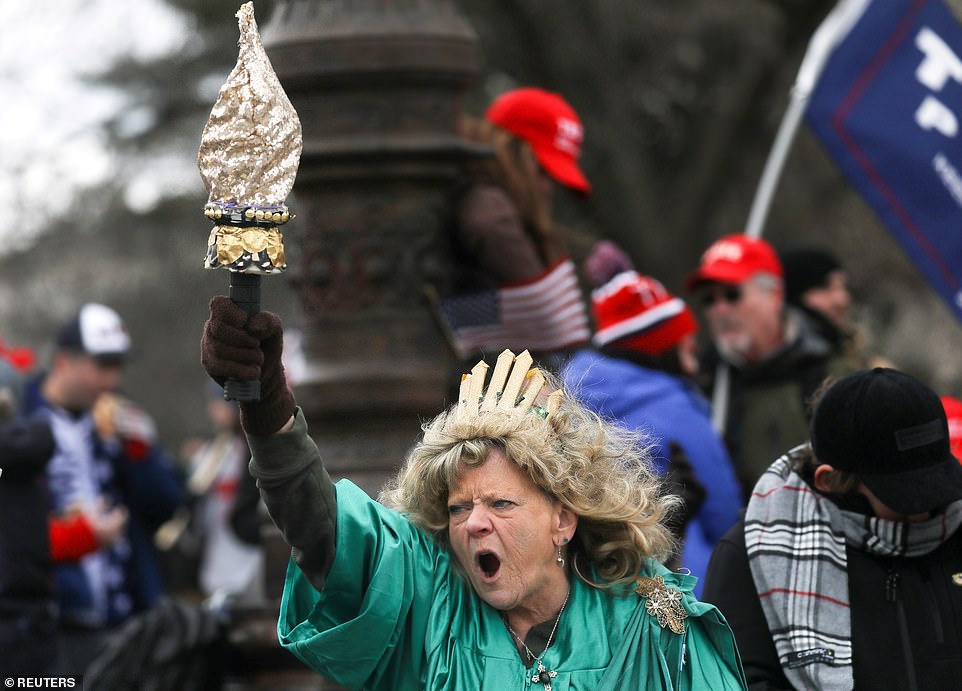 … answers on a postcard please.

Oh, Darlin’, this is going to be your Death Nell.

What the feck have we started here…

Reckon I might have one of Don as well somewhere.

But there are so many choices!

I hope your comment is in the same spirit of joking as HH’s post. Since it’s in quotes l think you get it but there’s no emojis so hard to tell for sure.

I’m most concerned about the obvious collaboration or sympathy between members of the Capitol Police and the insurrectionists.

I don’t disagree but there is a second layer

50 law enforcement personnel were injured. When it started the Capital police were outnumbered & outgunned. I genuinely appreciate those who risked their lives to protect the people forced to shelter in place.

One of the reasons for the lack of law enforcement is Trump would not approve use of vA & PA national guard. DC is not a state so has no national guard.

police were so understaffed At the beginning it would’ve been easy for it to be worse. There were live bombs found & protesters arrived with zip ties to take prisoners.

I am not saying things were handled fairly/correctly. 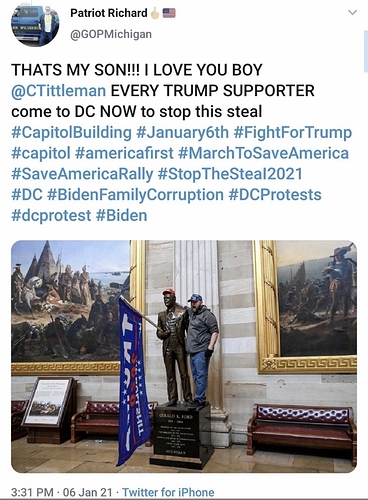 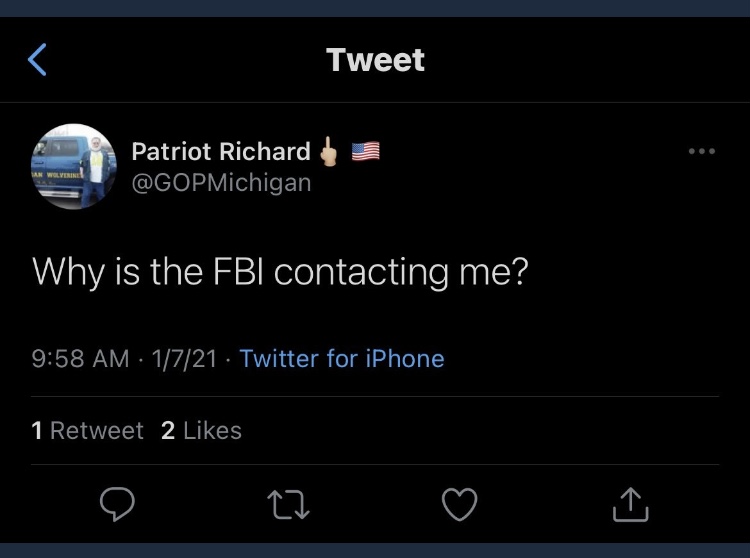 I was looking forward to traveling again after COVID and now when I do, I’m going to be embarrassed to carry and American passport.

there is a second layer

No question the entire response was lacking and exactly why will be addressed as investigations proceed. But I’m commenting on documented cases of police stepping aside and not even attempting control, police taking selfies with insurrectionists and police on tape apologizing to insurrectionists. And that’s just what I saw with my own eyes yesterday. So Capitol Police are under the jurisdiction of federal officials. When federal police appear to be in league with a commander in chief who is urging and provoking, I have concerns. So I have other concerns but my number one at this time is “domestic enemies.”

Interestingly the President’s oath leaves out the part about protecting the Constitution “against all enemies, foreign and domestic,” that is required by the VP and Congress members.

When federal police appear to be in league with a commander in chief who is urging and provoking, I have concerns.

I hear you. Our Law & Order, support the blue line President deliberately put them in harm’s way. None of it makes sense.

Btw he encouraged the mob to seek out & stop the Vice President.

Plus I’m dealing with family members & friends who just can’t see “it” for what “it” is.

I feel like the scene in the Exorcist when Linda Blair’s started to spin.