I received an email from AirBnB yesterday regarding this initiative. I was thinking about opting out because I don’t really trust how they will share my information. However, I’m wondering if opting out will affect visibility on the search pages. Has anyone heard anymore about this?

I didn’t get the e-mail, but it looks like what they’re doing is

They don’t mention it, but hopefully, they will also try to determine if there is discrimination from the guests (i.e. when searching, are guests of specific race less likely to inquire/request/book hosts of other races.).

I personally think it’s great. Data is what is needed to find the real problems, as long as Airbnb is actually transparent with the data. Otherwise, whoever has an agenda will report only the statistical findings that support their position. You know the old quote “lies, damned lies, and statistics”.

If Airbnb were to take action based on specific user data, we all should be worried. While the data may be statistically accurate, it would allow a computer algorithm to punish some percentage of innocent users. Although, now that I think about it, that’s not any worse than allowing a poorly-trained 3rd party “trust and safety” employee to punish users based on hearsay, which is the current status quo at Airbnb.

Edit: To answer your specific question, they don’t say whether it would affect visibility, but I would assume there is no effect if you opt out.

I didn’t receive an email either.

How on earth can you guess a profile race from their first name - what a strange concept.

Very easily with a number of them. Ok, the success rate may not be high, but it is still possible when parents have chosen traditional names.

Thinking of giving your baby an African American first name? Here are some ideas!

If a host had an enquiry from Lashawn G, then there is not a lot of doubt as to who is enquiring.

I’ve got my doubts about the output of this project, and what it will achieve if all the data being used is anonymised. Some hosts will always discriminate against certain guests, and it’s not only race. Here in the south of Spain it’s same sex couples that often face discrimination from hosts, some of the stuff we’ve heard (from our guests) is shocking.

The problem, which I don’t have an answer for, is how to weed them out.

How on earth can you guess a profile race from their first name - what a strange concept.

Maybe the concept is unique to the US, but it definitely has merit and here’s some real-world data to back it up. I went through my past guests and here are the first names of the booking guests I hosted who are Black:

I imagine that most US hosts would guess race correctly in half of these.

I received the email today; The email is a cut and paste from the website (screen print below). I couldn’t figure out how to get to Privacy Settings on the App, so I clicked on the “opt out” that was in the email and it brought me to the Web version Privacy section.

NOTE: The Privacy Setting is in Traveling profile, not the Hosting profile.

What are the pros & cons for opting in or out? 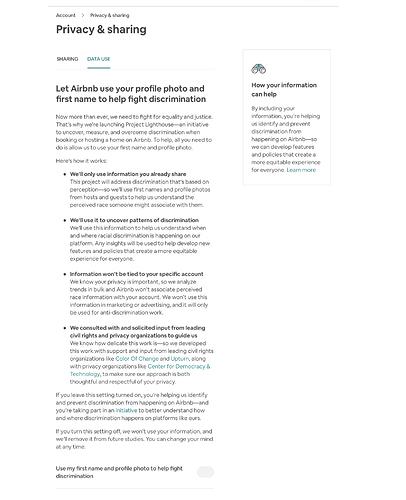 I’ve only had one black guest- her name was Nerisa. That wouldn’t tell me anything, to me, that name could be from anywhere.
I named my first daughter Kaiyo. I just made the name up. In her adulthood, she found out that it is actually a name in Japan- a man’s name. Her heritage is Eastern European Jewish and she looks Irish. If she booked somewhere, and the host thought she was Japanese, they’d be in for a shock.
I had a guest named Khalid. He’s American, born there. Lebanese mother, Columbian father.
Another guest whose name was Elia, which to me is a man’s name. And the profile photo, while clear, was taken from a weird angle. I assumed it was a hippie guy with longish curly hair, in his 30’s. Turned out to be a woman in her 40’s.
Here are some names my friends and family have named their kids- Onyx, Obsidian, Flamingo, Cohen, Oceana. Good luck figuring out where any of them are from, their race, or even their sex.

Many of us from BAME backgrounds do not have names that are particularly different from the ones used by anyone else. If you saw my name you wouldn’t have a clue where I am from . For example Josh, Anthony and Ken could be people from any background. @Brian_R170

Those poor children @muddy why do parents do that to their kids.

I agree that essentially it would be a guessing game, and that is why I also said:

Ok, the success rate may not be high, but it is still possible when parents have chosen traditional names.

I think the project has good intentions, but the methodology is flawed and I’m still unsure as to what Airbnb can do with the data it produces.

Many of us from BAME backgrounds do not have names that are particularly different from the ones used by anyone else. If you saw my name you wouldn’t have a clue where I am from . For example Josh, Anthony and Ken could be people from any background. @Brian_R170

I’m not sure you understand what they’re trying to do. The purpose is not to accurately guess a person’s race from their first name. They know that some names practically specify race and the purpose is to determine if there is a correlation between those names that imply a specific race and the number of declines for guests with those names. They also want to find the correlation between profile photos that imply a specific race and number of of cancellations for those guests.

While I have no idea about the names of population as a whole, my example simply shows that half of my guests that were Black have names that imply their race, so half of them might fall victim to discrimination under Airbnb’s current policy of showing only the first name before booking. It should be obvious that that would also apply to some percentage of guests that are Asian, Hispanic, and Middle-eastern, etc.

Good luck figuring out where any of them are from, their race, or even their sex.

“Guessing” is exactly what they want. Based on what I read, this is what I think they are doing. For every guest that opts in, they are going to take the first name and show only the name to a bunch of humans. Then they’re going to assign a score to that name that indicates the perceived race based on what race the humans guessed. After the score is assigned, every time a guest with that name requests to book and gets accepted or declined, it will be logged for statistical purposes so that it can be compared with the acceptance rate of other names.

They will repeat this for the profile photo, assign a completely independent score, and log that with host cancellations.

What’s important to understand is that it’s completely irrelevant if the people that originally guessed were correct or not, as long as the number of “guessers” is representative of the population (specifically, it should be representative of the population of Airbnb hosts in the US). All that matters is the perception offered from the name (or photo).

Regardless of what any individual here thinks about the effect of names on Airbnb booking the fact is that people with “white sounding” names fare better in multiple contexts than those with ethnic names.

I don’t disagree @KKC. I just think using someone’s first name to help establish their race is not a great way to go about it.

I just think using someone’s first name to help establish their race is not a great way to go about it.

Ah okay didn’t realise it was purely a US thing - thought it was an Airbnb thing and therefore global.

I don’t understand how this comment. The idea isn’t to establish anyone’s race by using their first name. Aren’t they trying to determine if Airbnb users are using first names to discriminate? I’m not going to defend the project, I don’t know enough about it. I’m just saying it’s well established social science that people do indeed use names to stereotype people’s race.

It’s been a few days since I read the beginning of the thread, maybe I missed something.

Nope, it’s global. I got the email under one of my travelling accounts.

Really? It says here that Project Lighthouse is for the US only.

Who is eligible to participate?
At this time, the project will be limited to U.S.-based hosts and guests.

Yup. Nothing to main hosting account though, which is localised to Spain.

Those poor children @muddy why do parents do that to their kids.

??? I happen to think all those names are nice. My daughters all have unusual names and they all like their names.
What I find really boring and unimaginative is when people name their children things like John, Mary, Susan, James, etc. With the more unusual names, at least people don’t ask “Which Susan are you talking about?”
However I do feel bad for kids whose parents name their kids things like Moon Unit and Dweezle.