I thought I had seen it all until today

I’m new to the forum and I love it . It’s calming to read posts and realize you are not alone .
Ok so I thought I’ve seen it all … until this morning. Guest checkout. I went to the house to start the laundry. And there it was … poop in a bucket in my laundry room sink… I just started screaming… called the guest he said he had no idea who did it… well someone in your party did it. Guest sent his brother and cousin to clean it up which they did a thorough job but I have been so disturbed by this the whole day .
I have had to throw out all the towels I had in my laundry room . Had a top to bottom cleaning of the whole house including all beddings just to make sure there’s no cross contamination.
What would you do in this situation?

Why did you throw away all the towels? I’m pretty sure washing them would have been sufficient.

I’m glad you called the guest and they came back; I probably wouldn’t have. I’m guessing the one who booked the place was mortified by what his brother and cousin did, but I’d slam the whole bunch of them in the review and give a thumbs down.

Poop in a bucket calls for bucket cleaning only. They truly shouldn’t have left it for you.

In my one bedroom one bath condo I have a 5 gallon bucket that can be used for emergencies then Clorox cleaned. No I don’t advertise that; any one in gastric distress can figure it out. Not ideal but if there isn’t a second bathroom then…

I would mark them down for cleanliness in the review.

I have had to throw out all the towels I had in my laundry room . Had a top to bottom cleaning of the whole house including all beddings just to make sure there’s no cross contamination.

Waaay over the top. You should have laundered linens in the room with bleach after washing out emptied bucket with bleach. You must really have a germ phobia. One turd in a bucket cannot contaminate an entire house.

Thanks for the reply. I really did think I over did it but I always think better to be safe than sorry considering the next guest 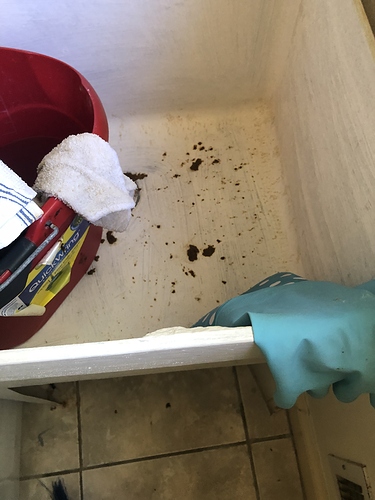 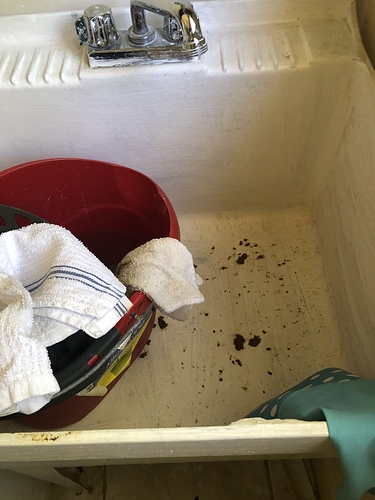 I have to say that entire sink and faucet looks pretty grubby. I’d probably burn the whole house down and start over from scratch.

I would have thrown out the bucket and slammed them in the review. I would not have called them to tip them off about the upcoming review.

Is it just me or are some of the replies on here at best dismissive, at worst pretty mean and disguised as humour?

The OP has admitted she went a bit over the top cleaning up but f me, what a horrible thing to find in your place

I would have thought a bit of sympathy wouldn’t be amiss. Particularly with a new poster (who hasn’t been seen again, unsurprisingly).

@Infuence I’m sorry this happened to you and also sorry you didn’t get a more supportive reaction. Please don’t let it put you off from posting again.

OOps, wrong post… Belay my last as they say in the Navy…

@Magwitch thanks for your post I really I’m soooo busy with my different businesses I never saw the other posts / replies until now, Saturday evening so no worries my love that doesn’t bother me. I have 4 luxury properties that keep me super busy. I just posted that to get some opinions and the first few were sufficient. Thanks again for caring but rude or negative comments don’t faze me especially from people I don’t know . Take care and all the best with your business.

Agreed, I thought the same thing

I too would have thrown out the towels and cleaned top to bottom just in case there was cross contamination. Washing the towels would smear poop all over the inside of the washer! God only knows where else they left feces. I can imagine them wiping their butts with the sheets. Animal poop would not faze me too much but human poop is beyond gross! Some humans are beyond disgusting. Sorry you had this experience.

My babes are grown but we used cloth diapers. So plenty of poop to go around. That’s why bleach in my Airbnb wash loads.

Washing the towels would smear poop all over the inside of the washer!

Yet somehow humans made it through the era of cloth diapers, and many people still use them.

Animal poop would not faze me too much but human poop is beyond gross!

Do/Did you not have children? I fail to see how any parent could be so afraid of human poop unless they had a housekeeper/nanny take care of all of the poop that invariably happens.

Yes, I did have children and I must say that even though I loved them dearly, dirty diapers always grossed me out! Much rather clean a cat litter box than change a poop diaper. LOL I actually did use cloth diapers but had a service that picked them up and delivered a fresh batch twice a week. I didn’t wash them in my washing machine.

There’s a huge difference between the bowel passages of your darling babies and a big fat ugly stinking shit from an adult stranger left for you to deal with!

Kudos to those of you who used cloth diapers/nappies. I was determined to be environmentally friendly (way back in the '90s) and started off with them. I think I lasted about 10 days…