I thought the only options were:
Infants less than 2yrs
Children less than 18 yrs

Edit, nevermind, I just looked and children are 2-12 years, so Helsi is exactly correct.

@Victoria_Dolci, it used to show a “reason” for it not being appropriate for children and I would put (instead): “0-10 years”, so that it read: “Not appropriate for infants and children 0-10 years”
However, it no longer shows the note but you could put something similar in your house rules to accomplish the same thing. I just let it go because it wasn’t that important to me and I also felt like people will fudge it to 10 anyway and having “10” made people fudge it even lower.

It probably isn’t illegal for you - where do you live? And do you live on the property? And are you only doing stays less than 28 days?

so Helsi is exactly correct.

How do I know if there are any legal restrictions on not accommodating kids wherever the OP lives??

I was presuming she meant in relation to Airbnb so did provide her with help. You know as a regular we often post wider information in our responses, not just responding to the initial question.

go because it wasn’t that important to me and I also felt like people will fudge it to 10 anyway and having “10” made people fudge it even lower.

It probably isn’t illegal for you - where do you live? And do you live on the property? And are you only doing stays less than 28 days?

I do not live on the property. The property is a house near Anna Maria Island in Bradenton, Florida. I ask because I have read horror stories about young kids destroying property.

How do I know if there are any legal restrictions on not accommodating kids wherever the OP lives??

That’s why I asked her where she lives, so that I can find out for her. It’s ok that you don’t know, but that was the question

presuming she meant in relation to Airbnb

But Airbnb doesn’t make laws, things are not “legal” in regards to what they say or not. I believe she is referring to their policy that states "hosts may not discriminate on age, where prohibited by law". That why she wants to know the legality of it.

I do not live on the property.

For long term rentals (28-30+ days), you cannot discriminate based on age or familial status, but I don’t believe there are any extra laws in Florida that prohibit it for short term rentals. However, there are a lot of hosts on here that are from Florida, they may know if there are any exceptions.

Is there a pool on the property? If so, there’s your reason for No Children. We have a pool and the listing specifically states NO Children, NO Pets. The front door is 8 feet from the edge of the pool, and I DO NOT want to go out in the morning to take the guests’ breakfast and find a “floater” face down in the pool!!

Thanks Ken, No pool at this time but plan to add one this year.

It’s confusing. You can tick off “no children”. But if someone showed up with a child, were refused, and then complained to Airbnb, I suspect it would not go smoothly for the host.

The best way to deal with it is in your chat with the guest before they arrive, I e anything in my rules you need to discuss, etc.

It did indeed. Now it doesn’t, how odd.

I’ve just checked BDC and HA and they are both similar now, no reasons published. Can’t be sure about HA, but I’m fairly certain BDC had them.

I wonder why the change

@JohnF, I just looked at our house rules for one of our listings. The rules include reasons for why we don’t allow children. Or is that not what you’re talking about? 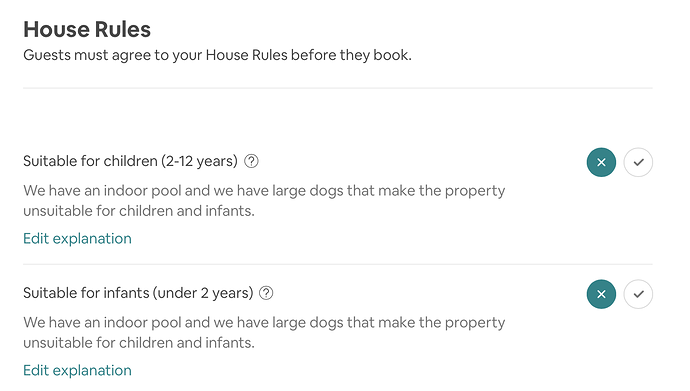 The rules include reasons for why we don’t allow children.

Yes, I can still type in the reasons as you are showing but they no longer show on the listing. Are yours showing on your listing?

Because in the US small-time hosts (I think it’s <4 units in an owner-occupied building) are allowed exceptions to Fair housing/discrimination laws. Basically, since the relationship is closer to roommate than landlord/tenant, they grant more leeway to your choices.

The trick is that you absolutely cannot state your prejudice in advertising, like they used to do: “no blacks, no jews, etc.”

So I could choose to only host childless, atheist men of color in their 30’s with <20% body fat, but I can’t state that in my advertising (since race, religion, and family status are protected classes). I can decline all but my ideal housemate.

That makes things tricky for Airbnb, because while they need guests to be aware of any safety issues that might make kids a bad fit, they don’t want to open themselves up to allegations of discrimination by stating “No kids - we just don’t like families”. I’ve also heard the safety disclosures can be problematic from an insurance perspective. If X thing is stated as dangerous to children, putting that on your ad can cause liability issues should anyone be injured by it.

Anyway, I notice they keep monkeying with the “may not be suitable” language and required reasons. I can only guess it’s because there are so many issues around this element and there’s no single “good” answer.

No, I’m talking about on the guest site. We’ve got similar to you (different reasons though), but it doesn’t show to guests anymore.

I think it’s <4 units in an owner-occupied building

Yes, it’s 4 units or less and owner occupied. And although Airbnb has stricter rules than even the FHA (which doesn’t really apply to short term lodging anyway) on other sorts of discrimination, they specifically allow age and familial status discrimination unless it is prohibited by law (which it generally isn’t).

Oddly, you could advertise this preference. Body fat percentage is not a protected class (yet, lol). It would make you look like an unhinged lascivious cougar with possible ulterior motives but I think, technically, you could do it

Anyway, I notice they keep monkeying with the “may not be suitable” language

But does it still show on your listing? Mine does not and it sounds like @JohnF 's doesn’t either. You can still fill it out but I haven’t seen it on any listings at all for a few months at least.

We’ve got similar to you (different reasons though), but it doesn’t show to guests anymore.

It frustrates me because I actually used that space to say “0-10 years old”, because I am open to hosting kids that are 11 and 12. Now that it doesn’t show, that doesn’t get in there. I could note it elsewhere but it’s not really that important. I do think Airbnb’s idea of an “infant” being 2 years old and all children being the same until they are 13 is not very useful in general.

Because in the US small-time hosts

Well, that counts us out

I don’t think it’s down to that, the European guest site is different to the US in quite a few ways so it sounds like a global position they’ve taken.

Yeah, it’s not just a US thing at all. It comes down to whether or not it is “prohibited by law” for you personally in your town, etc to discriminate on age or not. If you are not prohibited by your local laws for discriminating for age, then Airbnb allows it.

Eeek! There is actually a new “Help” document regarding this that goes into much more detail than before. I have discussed this many times and know for sure that they have added this new document. Might be worth perusing.

Airbnb hosts may not :

Impose any different terms or conditions or decline a reservation based on the guest’s age or familial status, where prohibited by law.

It’s the “where prohibited by law” that is important and different from the rest of the policy. Because, technically, it is not prohibited by law for me to discriminate by any of the other factors either but Airbnb doesn’t allow me that option evenso (which is fine, I wasn’t going to!).