A lesson learned here is to ask the age of the child that is coming to your place. When we know kids are coming we replace the 4k TV with an older TV and remove some antiques, but I didn’t have a chance this time and when the guest showed up I was very surprised by his toddler and told him that toddlers under two are free and don’t count as a guest, because his wife was going to come too. End of the story is the photos, I made a report to the resolution center, he said his kid didn’t do it so I didn’t press on, but it is obvious to me that a baby did do this since this was the first baby we had in a long time. But accidents do happen and he could have been in the bathroom and didn’t notice and he was a good guest. Should I ignore the scratches in the review of him since I can’t prove it? Also if he denies it how are my chances that airbnb will pay for it? Thanks 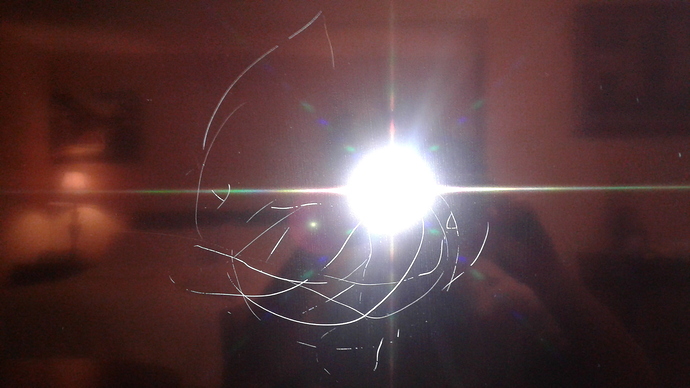 The next step after the guest refuses payment through resolution center is to escalate it to Airbnb. I’d reply to the guest “While I understand you may not have witnessed your child scratch the TV, it is indeed scratched and was not when we entrusted our home to you.”

Do you have any pictures from before their stay? If you do, upload them so Airbnb can see the damage was caused during this particular stay. Best advice is to do a walk-thru video before each guest. I rarely remember to follow that advice as a host, though I often do as a guest.

Here’s how to take the resolution request to Airbnb. Sometimes Air will pay out of their pocket if the guest refuses and you make enough fuss. Good luck!
https://www.airbnb.com/help/article/767/what-is-the-resolution-center

This is the second time someone has posted here about a toddler scratching a TV screen. I’m wondering what this sharp object is that toddlers are playing with unsupervised (for one thing).
I’d also suggest mounting your next TV on a bracket high on the wall where a toddler can’t reach it and where it can’t be knocked over or down by anyone of any size.

As for the resolution center, please do continue on with them and keep us posted about the result.

For much was your resolution request?

In any case you need to fight this and escalate this. with Airbnb. Contact the guests that you had immerdiately before and perhaps the ones before as well and get a statememt from them on the airbnb messaging thread. Perhaps they took photos in the living room showing the screen…perhaps just by chance.

Don’t these parents have liability insurance for their toddler? They should … it is obvious that you did not leave them a scratched up TV like that …
The nerve of these people and please do mention it in the review. Big thumbs down for them.

Also if he denies it how are my chances that airbnb will pay for it?

I can’t answer that, but I am interested to see what happens after you try to make a claim.

I personally would expect Airbnb will decline it as “wear and tear.” Start doing some research on how to buff out scratches from an LCD TV screen. There are many methods. I doubt they’ll come out fully, but they’ll be much less noticeable.

I’d also suggest mounting your next TV on a bracket high on the wall where a toddler can’t reach it and where it can’t be knocked over or down by anyone of any size.

Take this advice. If the TV was in a location where a toddler could reach that high on the screen then I am quite sure a toddler could also knock it over. The problems incurred from an injured toddler will be orders of magnitude worse than a scratched TV.

Don’t these parents have liability insurance for their toddler?

It’s not at all common in the US.

Thank you All for your replies and today I will follow up and let Airbnb know that he declined payment and will let you know what happens. I don’t have photos of before stay but I will ask the previous guest. I do like the idea of a vid walk-through before guest check-in. Yes, and I can’t imagine what sharp objects can do this, except a fork, a pen. I will hang the TV higher that will solve having to change out the TVs. If only I had that fingerprint test kit. The TV was $350 still have the receipt that I submitted with the claim and was only a few months old. I guess now, do I call them again, re-open a new claim and tell them that this guest declined? Thanks again for your help.

I too doubt that you’ll be able to claim but let’s hope I’m wrong.

The takeaway from this is that if you’re going to accept children into your rental, you have to childproof the property. I’m assuming that you’ve claimed from your own STR insurance and been turned down?

I will let you know jaquo - We can say not suitable but that doesn’t work, they can bring up to 6 babies here in LA, even if the room is meant for one guest. Same with pets, no pets just means, yes. lol

Not that it matters, but my guess would be a set of keys – speaking as a mom of former toddlers, they are excellent distraction devices but can cause a lot of damage.

That is right too, I didn’t think about that when trying to think what it could be.

We can say not suitable but that doesn’t work, they can bring up to 6 babies here in LA, even if the room is meant for one guest. Same with pets, no pets just means, yes. lol

We have a thread here - a fairly recent one I think - about how to discourage guests with children. There are some tips that you might find useful.

This is the most recent one but the topic of children comes up a lot;

ABB requesting an explanation of why listing isn't suitable for children

I’ve read the thread about guests with children, but wondering specifically if anyone can help with crafting an answer to: “What features of your space might be dangerous to children or easily damaged?” The only thing I can think of is the 14 steep stairs.

This mom would like to know how a toddler got near a large piece of electronics to begin with.

I’m so sorry this happened to you : ( If it were me, I wouldn’t mention in the review anything that I wasn’t sure of. One of my ABBs is a vintage 1968 travel trailer. There’s not much of a chance of getting replacement components for these vintage things unless you’re willing to drop an awful lot of money and time. One summer, I went in to clean and saw that the guest had forced one of the crank windows hard against a tree and broke the window. Now it’s a cracked window with packing tape over it, never to be replaced. I questioned the guest and he said that they never touched the window. There was an element of doubt because it wasn’t like me not to notice that it from the guest previous to him, and many people who had broken a window would not fess up if they thought the host was in doubt. I was pretty sure he did it, but I didn’t say anything in the review because I wouldn’t feel right unless I was 100% sure. Another guest cabled his bicycle to the trailer bumper. The bike fell down and scraped paint off on its way down. It was a new, very cute paint job : ( I knew the guest had done it.) I argued it, and got $75 for repairs and, because I was sure, I mentioned it in the review.

Don’t these parents have liability insurance for their toddler?

I don’t know of any parents that have liability insurance for their children - is that a thing in Costa Rica? In fact is it a ‘thing’ anywhere?

It’s really the host’s responsibility to make sure that their properties are fully insured. The liability aspect of the insurance is even more important for hosts who allow children.

… probably not in Costa Rica, but it is quite popular in Germany, where you find this under the following terms: Haftpflichtversicherung, Privathaftpflicht and Familienhaftpflicht.

That said, … most private liability insurances would probably find a way to wiggle out … here or there … and I saw something about toddlers being to young to be liable anyways.

Yeah of course they didn’t do it. The TV got scratched by the Holly Spirit!
Submit documentation to ABB asap and ask to be reimbursed! It is a damage; it has a monetary value.

I see nobody has mentioned the obvious, so I will.

If you accept children, I recommend getting a screen guard on your TV, even if your TV is mounted high up, out of the reach of children.

Children can still throw things at your TV, even if they can’t reach it. And the cost of a screen guard is small compared to the price of a TV.

In fact, I should take my own advice. I purchased a new and rather expensive Sony Bravia LED TV late last year. Electronics cost more in India (in dollar terms) than they do in, say, the US. And I’ve been meaning to buy a screen guard for it, even though I don’t accept children. So maybe I should get off my behind and do that. But I tend to be cheap in general; perhaps that’s part of the reason. But if I accepted children I would definitely get one, regardless. Tout suite.

And the cost of a screen guard is small compared to the price of a TV.

As a reference, I bought the 65-inch 4K TV in my listing last year for $400 (Black Friday sale). The price of a 65-inch screen protector that protects against scratches and impact starts at $270.