Airbnb says no text in photos?

A potential client brought to my attention that she could no longer see my listing, that she was getting a message saying that my listing had been removed. I tried to figure out the problem and after several hours I finally called customer service and was told that it was because I had uploaded 2 new photos that contained text (a screen shot of my internet speed test and a map of the area).

Has this happened to anyone else? Can anyone shed some light on this? I’ve seen plenty of listings with text in photos so what gives?

I will certainly lose the booking from this potential client too. It was supposed to be in 6 days from today. Surely she will move on.

Thanks for flagging this up. We have text on our photos and have had a sudden drop/stop in bookings in the last week. I’ll check this out from another gadget.

THANK YOU for the alert! I have a shot of a particularly sweet guest compliment that was written on my white board that I was thinking of adding to my photos. Now I’m worried about the pic of the neighborhood sign and the bus stop . . . What could possibly be the intent? Keep us posted on recovering your listing and what happened.

I’ve just spoken to the IN-House IT Boffin, who is dutifully at work in London. He checked our listing, which remains up, and thinks it might be the map. Something to do with identification of location rights reserved or some such. I got it at the time but it’s left via the other ear…

Interesting. I decided to turn off Instant Book temporarily over the summer and now I’m thinking of making that permanent. I had lost Super Host status because I had cancelled a reservation last November. It never should have gotten into the system because I had blocked the dates. So I took a screen shot of my Hosting Standard report and was thinking of adding that to my photos. I guess that might not work? 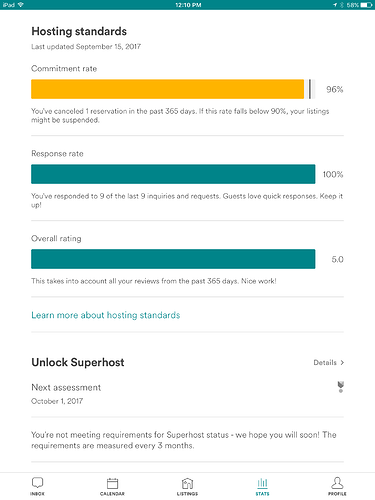 Definitely might be a problem. It seems that anything with direct text is flagged by the system. I posted a screenshot of my wifi test speed and it was flagged however another person has taken a picture with their phone of their computer screen, showing the same thing and it was not flagged. My listing is still down this morning by the way.

They are trying to crack down on people that put information in their listing that would enable people to book directly and bypass Airbnb. It’s unfortunate that their software can’t tell the difference between your url for your rental website and your internet speed. It seems it can only detect text you added to the picture not a picture of text. So I don’t think @dpfromva’s picture of a bus stop will be flagged.

Yeah, when I set up there was an actual instruction from Airbnb on where to put your permit/license number in your listing – so I cited my county permit no. And my business license no. Well guess what, both are blocked as “phone numbers” in my listing!

On one occasion I managed to communicate my email address by splitting it up in parentheticals, spelling out “dot” etc when I wanted to make sure a particular guest could reach me at work off platform, and I explained this in my message – so he wrote me back ON the airbnb platform “so you mean your email address is such-and-such?” I thought “gaaah they’re going to shut me down” but they didn’t catch it incoming, so I assume they only police outgoing messages.

I’ve had a screenshot of a map showing how central my place is in the city centre including some superimposed text depicting distances. This has been there for several months. I’m not sure this ever affected my listing’s visibility.

I once noticed a listing which had contact details added to the image. I reported it. It went away after a few days.

From what I gather now, I could have left the photos up and my listing would have been temporarily disabled while they were reviewed. I could not get a direct answer but it seems that this process normally takes up to 48 hours. Since they don’t notify you when your listing is disabled it seems that it could likely go unnoticed in most instances. However in my case a guest brought it to my attention because they were looking my listing up by the direct web address.

Since they don’t notify you when your listing is disabled it seems that it could likely go unnoticed in most instances.

As a general rule, an Airbnb host should never let this go unnoticed.
Why would you?!

I’ve had a screenshot of a map showing how central my place is in the city centre including some superimposed text depicting distances.

My guess is that the map is confusing the software so that it can’t determine what are characters from the background.

My guess is that the map is confusing the software so that it can’t determine what are characters from the background.

OCR is just OCR, it should be able to spot characters wherever they are on an image.
I don’t know what you mean by ‘background’, surely the lettering is visible on the image?

I’ve seen CAPTCHA tests that use this trick. They try to obliterate the numbers or words to keep an OCR bot from scanning the graphic. However I did do some work with a utility that did solve the CAPTCHA challenge in order to purchase sports and concert tickets. It worked.

Well unless you are looking up for listing directly or running a search and looking through every page you wouldn’t notice anything is different. I’m assuming most host don’t do this every day, and just monitor their dashboard. The dashboard looks exactly the same and says that your property is still listed.

Well unless you are looking up …

Sounds like a lazy host if they don’t check this regularly.

I’m reminded of the joke of shopkeeper whose idiot employee turned the ‘Closed’ side of the label to the outside because he then saw the side that said ‘Open’ (indoors) !!

running a search and looking through every page you

I don’t see a need to go through every search page, zoom in enough on the listing’s area so all listings including the one fit in one page. And refresh it periodically. I myself do a lot more tests but that’s perhaps the simplest way.

We had exactly the same thing happen to us after we uploaded a floorplan- no notification from airbnb, still showed up as listed in our dashboard- it’s just lucky someone was looking for our listing and alerted us otherwise I wouldn’t have noticed (well until my trusty @smarbnb report came through the next morning!).

We were also told it was a 48 hour review period but took down the floor plan immediately and we were relisted overnight (not sure how many hours it took, but definitely less than 10).

As a side note, this is a ridiculous policy of airbnb’s- some sort of communication/ notification would be nice !

I had this happen recently and wasn’t aware of it as from my end, I thought it was still live. Airbnb had deregistered the listing without telling me as I had photos of things to do in the area and I had used software to write on the pics explaining what the activities were - totally harmless.
While I was on the phone sorting it out I was told that it was possible that my photo of the pantry showing supplied condiments could be deemed inappropriate…really?!

What utility is that?

How frustrating that is when trying to get tickets to popular concerts!!