Would you review a no-cancel/no-show?

As hosts, would you find it useful if I reviewed a guest who decided not to stay but didn’t cancel her reservation? I use SmartBnB so I can review at the last second without prompting a reciprocal review (fingers crossed she doesn’t decide to review me anyways).

I worried this guest was going to be difficult because when she Instant-Booked a month ago; she expressed concern my bedding wouldn’t be to her liking. She told me the day before check-in that she wasn’t sure if she could make it. She said she was trying to change her reservation to the spring, but it was $40 more. I explained my December rates reflected the slow season and I charge more as the tourist season begins. I told her that I would be happy to host her at a different date, but she’d need to cancel and rebook. I informed her if she canceled she’d get her cleaning fee refunded.

After some more waffling from the guest, I called AirBnB and asked them to help this guest cancel, but didn’t hear back from them. The guest finally messaged me at 9 pm on the night of check-in to confirm she definitely wouldn’t be coming.

I have a feeling I got lucky and avoided a picky guest who wouldn’t have been happy with her stay. I don’t know if she realized she was asking me for essentially a free night and a discounted night (it was too late to rebook the December stay, and then rebooking in spring at my December rate would have been a loss). However, she didn’t ask for a refund so maybe I should just let it go. What would be useful to hosts to know as I review (or don’t review) this guest?

What would be useful to hosts

Not letting you know until 9 pm the night of check in that she won’t be using the reservation. Also just being needy in general. Bedding not to her liking? Puh-leeze. Of course those pre-non-arrival questions and comments must be handled delicately in the review. And bottom line, I don’t want to host her.

I would not care if a guest did not show up. Whole house rental no skin off my nose. Could be different for some. I would not review.

Review: " Guest canceled at 9pm day of reservation", honest and simple, anyone hosting gets it.
She cannot leave a review because she did not stay, this I know for sure.

She cannot leave a review because she did not stay, this I know for sure.

I’m not sure that’s true because she didn’t actually cancel. She just didn’t show up.

Guests who cancel on the day of arrival or maybe if it’s after your stated check in time, can review. Multiple posts on the forum about it.

I’ve had a few no shows, with a moderate cancellation policy in place, I got paid and didn’t have to do a thing. We are self checkin with electronic locks so no bother for me if they don’t show. I don’t review them either because it truly wasn’t a bad experience for me as a host.

I’ve had 2 reservations in the past year that did not stay, they contacted me late in the evening, one review was fine the other gave me 3 stars, I contact ABB they made it quite clear that guests cannot review if the guest did not stay and took down the 2nd review? I don’t know, the policy may have changed, but this was my experience.
If you think about the format of the review system, how can a guest critique the accommodation/host if they were not physically there to witness it? (cleanliness/location/communication etc).
I can’t review a guest that has never entered the suite, both contacted me the evening of arrival, I still recieved my fee as I have a strict cancellation policy.

Regardless, she cannot have an opinion with out the experience to draw from, therefore in my mind she has forfeited the right to review.

The AirBnB system thinks she stayed because she didn’t cancel, she just told me she wasn’t coming. I told her to cancel to get her cleaning fee refunded and called the Superhost hotline and asked them to contact her, but nothing has come of it so far. I’m happy enough to have my full payout, but do feel she was high maintenance for asking for special bedding (remove the comforter and replace with blankets). This was something that I wasn’t sure if hosts would care about: set up for a great with a particular request only to have her not show up.

Regardless, she cannot have an opinion with out the experience to draw from, therefore in my mind she has forfeited the right to review.

Sure she can, and just because you don’t think she has the right to review doesn’t make it so.

You just never know with people. She may post a review full of complaints about what she thought the experience was going to be like, such as how she didn’t think she would like the bedding, and then say that’s why she decided not to stay.

I probably would do a last-minute, short, factual review just stating that the guest had a lot of questions/concerns, asked for special bedding, was offered the option of cancelling the stay but didn’t respond, and then ultimately never showed up.

ALWAYS REVIEW EVERY GUEST that you can! You know this Yana – you’ve read it here before.

Guests can have a variety of reasons to keep a booking but not cancel. More power to them if they want to pay me and not show up.
That is a 5 star across the board as far as I am concerned.
How can we possibly mark down the quietest guest ever, who left the place exactly as it was prepared and caused no impact to our space?
I wish every guest was like this ~ 10 stars / thumbs up.

This just happened to us about 30 days ago. Guest cancelled day of check in, after check in time, then left an awful review because I wouldn’t refund. I called ABB, they said the guest can still review even though they didn’t stay. There was some BS bc it was day of or something, I don’t remember. As always, ABB is a fickle mistress and changes her mind frequently.

ALWAYS REVIEW EVERY GUEST that you can! You know this Yana – you’ve read it here before.

I have a one-sentence review queued in Smart BnB to go when the review window closes amounting to “GUEST decided not to stay.”

What the forum seems split on is whether this should amount to a positive or negative review. I think the on-site hosts like my self may be concerned about the concerns about the bedding, a day of waffling before telling me definitely she isn’t coming, and wanting the move her stay to spring at my winter rate to avoid losing her money.

I have decided I WILL review her. But in the end she didn’t stay and didn’t ask for a refund when I said she couldn’t move the dates and hasn’t reviewed me so far, so that is why I’m undecided on how to review. I wouldn’t want her to Instant Book my place again because I’m worried she’ll be difficult to please. She says she intends to in the spring because she was looking forward to her stay. But to many hosts here, understandably it seems she is the dream guest.

but do feel she was high maintenance for asking for special bedding (remove the comforter and replace with blankets).

I had a guest like that, I felt he didn’t trust me when I told him my sheets were 100% cotton …I even showed him the tag, I assured him I double rinsed his sheets, but nope, he still brought his own bedding. He booked once weekly for 4 months, my son was taking over the suite for a couple of weeks, I explained to him to just put a simple flannel on the mattress, as he brings his own bedding & is very particular about odd things…
His response…yea, he’s probably on the spectrum (ASD), upon reflection that was most likely the case.

What if she doesn’t want it broadcast on her profile that she did not stay at your place? Why tell the world ?
You got paid 100% and your house was in perfect condition.
This discussion truly baffles me.
How can this be anything but 5 star? We hosts are not mommy’s and daddy’s where we report that the child did not come home.
I guess I see this very differently then the majority .

As hosts, would you find it useful if I reviewed a guest who decided not to stay but didn’t cancel her reservation? I use SmartBnB so I can review at the last second without prompting a reciprocal review (fingers crossed she doesn’t decide to review me anyways).

I’m not sure why you’d be worried about getting a bad review from someone who didn’t stay?

Only once have we had a no-show situation and the guest wrote a review explaining that he wasn’t able to honour the reservation but that we were polite and helpful in our responses - the only thing he could judge us on, after all.

Just because a no show doesn’t effect your space doesn’t mean that your time wasn’t wasted…especially in the case where the Host checks the Guest in. That happened to me and it was a multiple day waste of time because first he IB for the 2 hour window that we were in the middle of, then doesn’t respond until end of window to say he andthe large party was going to come late then the next day and then asked for a refund a week later because Airbnb told him to. I was livid because not only did it interfere with that entire night, but kept me up all that night and then worrying the rest of the weekend when/if he’d show up and then worrying about his review since I was just as honest in my response as in my review. I was surprised at my review because although he gave me 3 for value and location he gave me 5 on everything else and “good response.” As the write up. He did get a review this month that said “Great:)” so hopefully it was a one off and he learned. 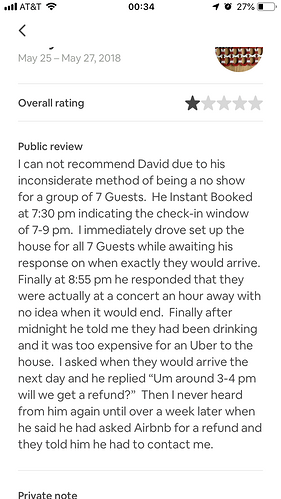 What if she doesn’t want it broadcast on her profile that she did not stay at your place? Why tell the world ?

My time is valuable. I spent a day messaging back and forth while she waffled and tried to negotiate a price for rescheduling. I also set up special bedding per her request. I don’t think a no-show would be an inconvenience to a host with a more automated listing but I live on site and do everything myself. On the other hand, I would have still had to do all this prep for the guest if she HAD stayed. I got paid either way, which is why I’m undecided whether this information would be useful to other hosts. For some here, this is the dream guest. For others, they’d want to avoid someone who is indecisive, high maintenance, and budget-seeking.

I’m not sure why you’d be worried about getting a bad review from someone who didn’t stay?

I haven’t personally had it happen yet, but I’ve heard stories here from hosts who got a negative review because they wouldn’t refund the no-show guest.