What is the best way to make a single bed that is against a wall?

Two of our bedrooms have single (twin) beds that are up against a wall. I know it’s not ideal, but it’s the way it has to be due to space considerations.

What is the best way to make the beds, so they look neat and attractive?

They have a fitted sheet, a flat (top) sheet and duvet with cover. These are both platform style beds, so no boxspring. I can never make them look right.

I stand the mattress on its edge to make it and lower it carefully.

More specifically, should I tuck the duvet under the mattress or leave it loose. I tried pulling back the duvet and topsheet as seen in some Airbnb listing photos, but it looked messy no matter what I did.

My family doesn’t use topsheets, just duvets with covers. I only put the topsheets on for Airbnb guests, in case they prefer them…

See attached photo. It’s not my listing photo, but one I quickly snapped before the most recent guests checked in.

How to make up that particular bed so it looks better?
(The twin in the other rooms is very similar.) 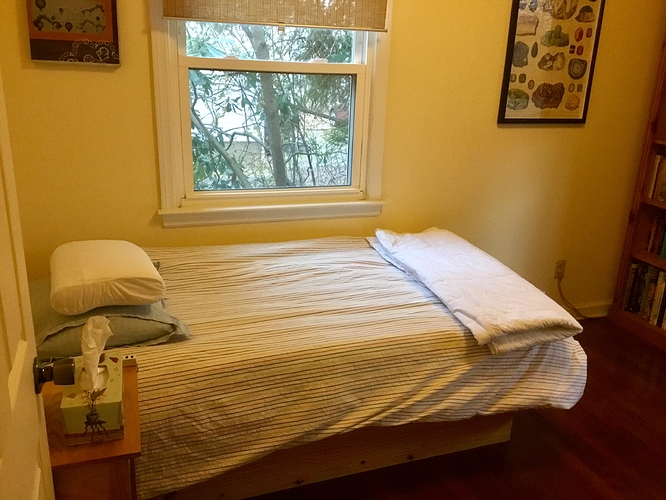 It looks like you have too much of the sheet on the exposed side, can you move the bed 6 inches from the wall so the sheets are centered on the bed, I would also have the comforter out on the bed.

Is that the fitted sheet? I looks way too big for the mattress.

Hmm, it’s as if the duvet doesn’t fit in the cover well. You could tuck it in all around but not sure how it would look on that bed frame. I also don’t care for the way the pillows are stacked and the sheet or whatever on the end of the bed is unappealing. My airbnb bed isn’t made right now but when I get it done I’ll post a pic.

I have a double bed with walls on three sides, @GardenGnome, and have to do the same tip-up thing @Debthecat does. My bedsheets are a little large for the bed - it’s an odd size - like yours, so I make sure the extra bit is tucked away on the wall side beneath the mattress. I even reach underneath to pull that extra bit toward me. The tighter you can get the sheets to look, the better. Then you can fold that duvet at the foot of the bed if you like.

Here is my current duvet cover 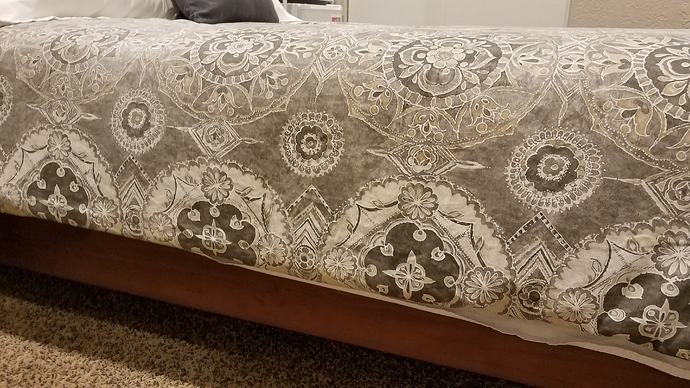 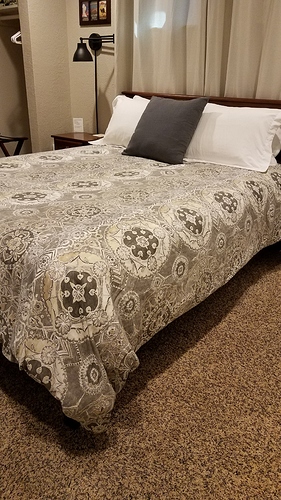 I have several. The one that is most likely to look askew is the king cover with a queen duvet in it. I’ve figured out how to make it look okay but it’s not my favorite so I’m now just using that king duvet with nothing on it like a thin blanket on top in the summer. If the duvet properly fits in the cover it looks as pictured

What you see is the duvet. The sheets are not visible. The thing on the bottom is folded lightweight comforter, since it’s been so cold.

What you see is the duvet.

Make sure the duvet is pulled to the edge of the cover towards the door. Shake it out well so that it’s smooth inside the cover. Then tuck the loose part of the duvet into the side against the wall and after you get off the bed from doing that just smooth it and pull it tight on the side towards the door. I’d fold the comforter on the end in half and let it drape over the end of the bed rather than the stacked look at the end.

KKC that is very pretty material, and looks neat:)

it’s Pottery Barn. I do like that it’s 100% cotton and doesn’t show wrinkles. I only bought it because I had a certificate that I had to use there. It’s already got a hole in it though. At the end, I wonder if a guest dog chewed it.

Too much Greige in there but it is what it is.

I think if you let it hang without being tucked under is better. but make sure the edge is straight with the floor or the bed frame. I would suggest prettier pillow covers and always put the openings of the covers towards the wall. Do you have a cover for the extra duvet?

I use a duvet and fitted sheet but I made a lightweight cover ( which is custom, and very short on the wall side) and decorative matching pillows. I ask the guests to put the above two items in the nearby cabinet. My last guests slept on top of the duvet??<>?><… so now I will have a top sheet there in the cabinet where the lighter and heavier weight duvets, in their covers are found. Its true the duvet cover size relationship has a lot to do with the final look. 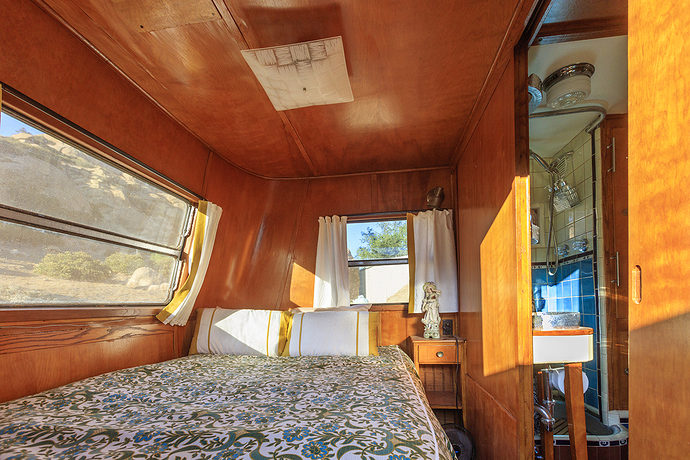 Still pretty, how do you hide the hole? Yeah I am so over white and greige, but it’s hard to find other colors unless you want turquoise or very bright… here I am dissing turquoise, yet there is some in photos<><> That fabric is vintage bark cloth from France btw

how do you hide the hole?

It’s at the end of the bed. There is so little room at the end that guests can’t really get an angle to make it visible. With my white duvet cover I usually tuck it in at the end. Next time I make that set up I’ll send a pic. I have several configurations.

I actually like my very bright set up the best and it’s the one on my listing. But I don’t always have time to get everything washed and so have various covers. I also switch the look based on who is staying. I have a couple of set ups for dog owners and different set ups depending on the guest. I confess I rely on stereotyped guesses. 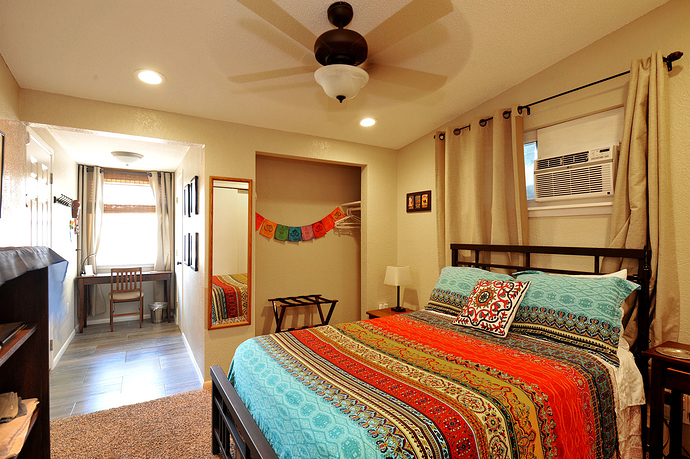 oh but that is very pretty, I like it, the matching shams and special pillow, everything!

that light cover in the pic broke

ebay has tons of vintage ones.

Sadly that pillow cover is gone forever. It came with the duvet and shams but was white on the back. So it got a stain, when I tried to get the stain out the colors in the dye on the front ran and well, out it went.

oh that’s too bad, yes you do have to be careful with the lovely Mexican Otomi , Suzani or other handcrafted embroideries. Next time, if the stain is on the back, get someone (dry cleaners w sewing dept) to just replace the back part.
I got a new guest coming tomorrow:) I know they have those shades on ebay, that’s where I got the one that broke. There is a cool one @ 40.00 that has a scroll of metal around it, but he wanted +100.00 to ship it overnight… So I bought 3 cheapos @ home dept. for now, 2 that match and are round, I may put one in the galley as well.

I think part of the problem might be the fabric of the duvet cover. It’s a heavy, textured cotton, kind of like seersucker.

Thinking of getting a white-on-white damask stripe cover instead. While I prefer percale sheets, in this case I think a cotton sateen texture would lie better on the bed and look neater.

Something with a little texture like what you are considering would be better than seersucker. And you can get some prettier pillow cases in same or contrast. I think those foam pillows never look nice, I may not keep that item out. Seersucker only looks good when it’s ironed imho. I would also think that a bare duvet even as an extra, should have a cover, or it will start getting shabby looking.
A blanket type extra may age a lot better, look better, fulfill the same purpose and can be used as a “throw” as well. I bought a beautiful piece of Alpaca at a fancy fabric store literally 40 years ago, it’s washable and still looks brand new. One of my best purchases ever. Or you could look for a wool Hudson Bay or Pendleton blanket. There are also some beautiful Dutch wool blankets on etsy. I just searched on etsy, and there are even some that match very well if you need 2 for your room. I would consider your other decor when choosing the throw, as it may be a focal point if the bed is more plain.