What do you tell someone with high maintenance reviews

I am sorry, but we are not a good fit for each other and I can not accept you as a guest. I wish you well in your search for the right house. Kindly , xxxxx

If that was the only bad review I’d let him explain.

I can see someone wanting to be compensated for missing a night of sleep that was obviously preventable by changing batteries on schedule. If you aren’t letting out your space so people can sleep, what are the guests paying for?

I’ve taken down every smoke detector in my house in the middle of the night when one goes off and I can’t figure out which one. And my smoke detectors require a six foot ladder.

change all smoke detector batteries on a strict schedule.

obviously preventable by changing batteries on schedule. I

In my home I use 7-10 year life lithium batteries.

One failed after a year of use. Changing batteries on a schedule wouldn’t have helped. 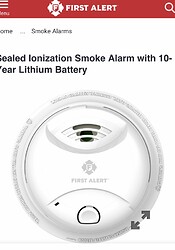 So what did you tell Jason and was there a response?

I just responded about the AC question he asked in the inquiry, and haven’t heard anything else. So probably found somewhere else (maybe with central air), fine with me!

Did the lithium smoke detector fail while guests were in residence? If so, what did you do?

guests were in residence? I

-8 ft ceilings
-Easy step stool reach & twist off ceiling
-Guest promptly removed because annoying and put in storage closet
-There’s a second one 25 feet away so guest not at risk-double coverage, it would alert if smoke.
-Lowe’s Home improvement 1/10 mile away.
-I ordered a replacement and paid for it on line-customer pick up
-I explained to guest that apparently it was a faulty 10 year unit & there was a second smoke detector providing coverage. I had ordered replacement & would replace after they checked out
-Husband was intrigued and wanted to see packaging & inserts.
-He nipped to Lowe’s, picked up replacement & installed

This happened about 3 years ago when the 10 year units were freshly on the market.

I’ve been blessed with some wonderful guests.

For sure! Maybe I’m just a more easy going guest, but I wouldn’t expect compensation for a beeping smoke detector

Absolutely. If a bird chirps too loud next to him while on the property, do I have to pay for that too?

I would have mentioned it in the review.

I wouldn’t! We change our batteries and test regularly to make sure of safety but like someone described above, sometimes I’ve heard they can beep before that time comes. As long as the guest can pop out the batteries/host responds (we live locally and have them on low ceilings)- it truly doesn’t seem like an issue worth mentioning in a review or asking for a refund. We also have a bag of new batteries stashed on-site for any unforeseen issues.

I bought a package of two of those supposed 10 year life smoke detectors (Kidde brand). I accidentally snapped the first one into the holder I had just screwed to the ceiling incorrectly, so it wouldn’t work. Installing a smoke detector should not need instruction sheets with tiny type.

The second one install OK, and died after 16 months.

It’s easier to buy 9V batteries in bulk at Costco and change all the batteries every spring on Daylight Saving Time day. Even easier to remember because our local fire dept. reminds us to do that around that time every year.

I had a similar incident happen at my large log cabin, a battery started beeping on a smoke detector in our basement level, we have them in all bedrooms (2) livingroom and hallway. it is hard to determine which is beeping, so the guest pulled them all down and removed the batteries. I didn’t have any new batteries on site so he finally figuresd out which it was put the batteries back in the others and pit them on the tables in the bedrooms and put the non-working one on the counter in the kitchen. It was my fault that this happened, we know have a semi annual schedule that we change batteries and we also keep a couple of 9v batteries hidden in a cabinet, just incase. I wasn’t upset that the guest didn’t choose to return the detectors to their original spot as this shouldn’t have happened during their stay in the first place, they are not responsible for my lack of oversight and it was a new hosting lesson learned.

that being said, I have actually declined bookings due to previous reviews, I simply tell the guest that due to previous issues and reviews from other host we are not able to accommodate their request. but be cautioned that they will often times have someone else in their group rent.

I get one of these a year and live in terror of them. I have noticed that with Covid the Airbnb market has changed because a large number of people who are used to traveling around the world and stay in five star hotels are being forced into local activities. Sometimes these peoples expectations are impossible to meet and Airbnb should review their review policy so as to be fair on the people who supply the input to make all of this work.

As a guest in an Airbnb home I used my good ears and located the smoke alarm in the hallway that was making an unbearable noise. I removed the battery and that did not help, so I put it outdoors so we could get some sleep. I messaged the host to tell him what happened and where they could find it after we left. He was gracious and glad I could handle it myself. These things happen, but it is not a reason to freak out or “dismantle the entire house” about it. Someone who disabled all the alarms in the place is definitely overreacting to something, imho.

Good advice, give them the chance to back out and warn them that this may not be up to their exacting expectations. I have the same problems, I write it into my description to try and avoid picky guests.

I would absolutely not host this guest, have had a similar experience myself that I regret hosting to this day! Also agree with the above, polite but straight forward. Just cover your bases, not sure if that means temporary blocking those days.

not only themselves, but my family also, at risk is something I would not tolerate. We have three hundred years old timber beams in many parts of the building and given our climate, they’d go up like a rocket. This is why we have smoke and heat detectors throughout the building, mainly in the older sections.

I’d decline purely on that basis.

st this guest, have had a similar experience myself that I regret hosting to this day! Also agree with the above, polite but straight forward. Just cover your bases, not sure if that means temporary blocking those days.

Totally agree with you. Lucky I’ve never had someone in this vein but I am getting out of practice, as Sydney is locked down.

We do not have automatic booking on for that very reason.

Perfect. We do the same. This is exactly why we have reviews.

I have an almost identical story to this!!! Unreal. I had another delivered to them via Amazon same day delivery. Luckily guests were cool with it (they did have to smash the unit to get it to shut up, however! LOL)