I’m in the San Francisco Bay Area where, like many other places worldwide, we are experiencing severe drought. This morning, in an agonizing replay of yesterday at 5:15 a.m., my in-home guest showered for 22 minutes,

not counting the 2 minutes it may have taken for the water to warm. No, I don’t time my guests’ showers but, since the previous day’s shower ran so long I thought he might have had a heart attack, I was curious (and wide-awake, so, what the hell?)

The guest is a fellow educator and Californian hence, hardly unaware of our dire water situation. I’ve placed a prominent, “tasteful”

water conservation placard in each bathroom.

Should I have appealed to, or reminded the guest after his first 20+ minute shower?

Recently I asked a young guest staying for 3 weeks to cut his 2 long showers per day to one, “so I’ll have water for the garden” He wasn’t thrilled, “I always take 2 showers a day”, but responded to the “my poor garden” He left a stellar review- including his enjoyment of working from the garden.

My niece, also a Northern California host, put a “not more than 5 minutes” showering rule in her House Manual, but caters to more of a backpacker crowd, where I have more working professionals & City tourists.

Should I put-up, shut up, (wise-up, throw…) and drought-be-damned?

Or - I got it! Should I put a timer on the shower like I have for my drip system?

“Hi George, I hope you’re having a great stay. Just a note, I forgot to remind you before that we’re currently keeping all washing and showering time to a minimum because of the drought. I know we all want to do our bit for conservation! Do let me know if there’s anything at all I can help you with. Have a great day!”

Message the guest within the Airbnb message system just in case.

Since we are right here with our guests, I usually speak to folks when we pass getting coffee or coming & going, but you’re right here. More than a “would you mind…?” but less than a Rule. I will plagiarize you, with thanks!

Recently I asked a young guest staying for 3 weeks to cut his 2 long showers per day to one, “so I’ll have water for the garden” He wasn’t thrilled,

If a conversation, it must be handled delicately: a mix of “blame the 3rd party” (mandate from Governor or whatever agency etc), and ASKING for their cooperation and consideration. Start with “Hi THANK YOU so much for choosing us and we hope that you are enjoying the area, etc”.
.
I would recommend creating a nice notice you can post up, to both inform guests and get their support - they need to want to help.
.
That aside, this will help: https://t.ly/5fTL. We have several of these for us and our rental units. The switch is dual position: 1.75 or 2.5 gallon per min. IMO, this is the best low flow showerhead, and we have tried many. At 1.75 gpm this thing rocks! It has great coverage and feel.

Spent a season in Antarctica years ago with a 2 min rule for showers, so tell them 5 minutes is a true luxury.
Good grief, I can understand more 2 brief showers in a hot muggy climate, but SF, ridiculous.

These 20 minute shower people should be forced to live for a year where they have to walk several miles to get water every day and carry it back. As far as I’m concerned, hosts shouldn’t feel bad about insisting on water conservation. Those who say nothing are also a part of the problem. To me, it’s not much different than not speaking up if one witnesses someone dumping toxic waste, or racial discrimination, or suspects a child is being abused.

I’m also big on water conservation- there are water issues where I live, too. My guests have all been great about not taking long showers.

But rather than say it might make things difficult for you, as in not having water for your garden, make it about the guest- if they take a 20 minute shower, there may not be enough water for them to flush the toilet, or even have a 1 minute shower tomorrow.

I’ve been struggling with the same issue. I put a note similar to above in my check-in message.

Just ordered one - thanks! Me thinks it’s better than a sprinkler timer

I personally wouldn’t say anything other than whatever signage you already have. If you were using well water with a limited flow rate or had a septic system with known restrictions or had water use rates so high they couldn’t be factored into your nightly rate, maybe, but otherwise, it’s not worth it. Just install very low-water-use shower heads and call it a day.

I have a funny story: I grew up where water was expensive and I was taught to conserve water. I typically take under 10 minutes to take a shower, but I only run the water for about 3 minutes which is basically for wetting and rinsing only, so my personal water usage is very low. I’ve heard this is called a “Navy Shower”. I went camping a couple years ago at a campground where I had been several times before but the restrooms/showers were being completely renovated. Since the regular toilets/showers were unavailable, the campground added a “trailer” that had men’s and women’s restroom with 2 showers and 2 toilets inside each. I took a shower and it was by far the strangest shower ever. It had a fixture with no temperature control and no volume control. Just press the button/knob and water flows for about 15 seconds (These are somewhat common in sinks at public rest areas and gas stations in the USA). The water came out at an insanely high pressure with an equally insanely low flow rate. It was just a mist more than 10 inches away from the shower head and it was painful if you were closer than about 5 inches from the shower head. It took well over 30 minutes to finish my shower just to rinse off the soap. I would be surprised if I used even 3 gallons of water. I was intrigued, so later, I looked more closely at the trailer and I could tell it was totally self-contained (fresh water and drain water), so it had to be very conservative. I just thought that would be an example of the extreme where you make it so inconvenient for a guest to use water, that they can’t possibly use it in excess.

Also, I don’t know anything about your listing, but in mine, the irrigation system accounted for well over 50% of the overall water usage, so the guest usage wasn’t as significant. In my own home (with 2 adults and 2 teenagers), my irrigation and swimming pool accounts for 75% of my water usage.

We had two long droughts in Australia in the last 20 years and as I was on a rainwater tank we would sometimes run out which happened recently despite it being winter and wet. Fortunately my water guy delivers but not usually till the next day. I put in a rule about 3 minute showers and a sign in the bathroom and provided 3 minute egg timers. I couldn’t tell if people were obeying the rule or not but many mentioned it in a positive way. Some of my guests came from hot tropical countries where 2 or 3 long showers a day, especially for women, were the norm. If I could get them to cut that down to two 5 minute showers then I figured I had succeeded. I took the signs down recently as it is Winter and then we ran out of water after a burst of post lockdown activity.
Another tip: say it is a regulation restricting guests to a certain amount of water and if they break it you might get fined.

Another tip: say it is a regulation restricting guests to a certain amount of water and if they break it you might get fined.

From my years living through drought in California I remember fines/citations were given for things like watering yards, pools, fountains etc during drought. I wouldn’t recommend lying to guests if there aren’t actually fines for residential usage like taking long showers.

I wasn’t lying to them.

When I lived on a boat-if not docked, two shower options
1 black bag hot water, no temp control 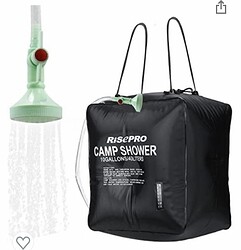 Either way limited water supply.
Faucet on preliminary rinse
Water off
Lather up
2nd rinse
I tended to do a repeat

Perhaps a nice notice:
————————————————
We want to be socially responsible and comply with local water conservation measures.

You can help by doing a yacht shower (saves 15 gallons per 10 minutes of usual shower):

Following this water conservation process of water on only to wet/rinse toothbrush helps too.
—————————————————

A “Yacht shower” sounds like a 5-star amenity - love it

We had three couples (doctors, lawyers, etc.) stay with us once during a terrible drought. Our housekeeper asked them to conserve water as the water supply for the entire island (St Lucia) is rainwater and the whole island was running low. They complained about it in the review but didn’t mention it was because of the drought.

Since it usually isn’t a problem, I wanted potential guests to know that it this was unusual. I responded politely “We appreciate your minimizing showers since we were in the middle of a terrible drought.” A few months later, their review was gone! I’m guessing they were embarrassed and asked AirBnB to remove it.