We don’t currently own a toaster.

My current guests, a couple of older ladies from Sweden, and surprisingly via Wimdu (the first guests I’ve ever had from outside Airbnb) asked me - both of them individually, why I didn’t have a toaster. They’re here for three days, till Sunday.

While this issue probably falls under the crashingly trivial category in a 21st century Earth beset with problems, I must admit that I’ve given it some thought, but so far haven’t purchased a toaster. The reason is that I’m terrified of fire hazards. I put that to my guests, but they weren’t impressed, pointing out we already had a gas cooker. “It’s an open fire”, as one of them put it. I responded that only our cook uses the cooker.

For the record, they’re the first guests to complain about lack of a toaster that I can remember - I guess I’ve had fairly undemanding guests. So I don’t particularly feel the need to dash out and purchase a toaster. But I thought it would do no harm to ask about this (admittedly tangentially related to hosting) issue.

To expand a little on the fire hazard issue. My home has a wooden roof. Additionally, I think the walls might contain wood too. It’s certainly very flammable. And I don’t currently even had a proper fire alarm system set up. And doing a search for “toaster fire” certainly brings up plenty of hits.

I think you need a toaster

I really wouldn’t worry about a toaster, assuming it is modern.

I really wouldn’t worry about a toaster, assuming it is modern.

Thanks for the comment.
Can you expand on “modern”? Are there kinds of toasters that are less liable to have fire issues?

If they are the first guests to complain then I wouldn’t buy one.

I don’t own a toaster either, I own a small counter top oven, commonly called a toaster oven, because it’s much more versatile for heating and cooking a variety of things. I have no idea if they have a better or worse record for safety. And there is no toaster in the guest room here.

If they are the first guests to complain then I wouldn’t buy one.

Sure, though it wouldn’t be a bad thing to have proper toast. I quite like toast, though given the quality of bread here, I’m not sure how good the toast could be.

I own a small counter top oven, commonly called a toaster oven, because it’s much more versatile for heating and cooking a variety of things.

Yes, I’ve thought about alternatively buying one of those. But I thought they might be even more dangerous - I’m not sure.

I have a toaster oven as well.
I don’t think you need a toaster Faheem. You’ve been hosting a couple of years now, right? It’s never come up (visual of toast popping up, lol) so I wouldn’t worry about it.

Honestly, another example of guests needing to go with the flow. If I am traveling to Mumbai, India, the last thing I would expect to see in your kitchen is a Western toaster. I would expect curry and other things… but not a toaster.

The fact that these guests “argued” with you about whether or not it counted as a fire hazard seems a bit more troubling.

Thanks for the thoughts.

You’ve been hosting a couple of years now, right?

Closer to a year and a half.

It’s never come up (visual of toast popping up, lol) so I wouldn’t worry about it.

Well, people haven’t mentioned it, sure, but that doesn’t mean they wouldn’t like better toast. Our cook mostly grills the bread on a skillet, but the results aren’t stellar. And he’s the only one who uses the gas stove. Like I said, I’m paranoid about fire, so I tell everyone else to keep their hands off it, but he’s been working for us forever, so I do trust him. So he’s effectively the only one who can make “toast”.

The fact that these guests “argued” with you about whether or not it counted as a fire hazard seems a bit more troubling.

Shrug. Well, I suppose everyone is entitled to their opinion. They’re not the boss of me, though.

Guests have a cook prepared to make them delicious Indian foods and they are crabbing about you not having a toaster. Eye roll.

I suppose you will see that in the review, just as I get comments sometimes because I don’t have a dishwasher!

Antique and vintage toasters could be more of a fire hazard than modern ones. You just want to make sure the wiring is sound, it is made by a licensed manufacturer and keep it free of crumbs. You could unplug when guests leave.

I suppose you will see that in the review

Heh, possibly. That would be a funny thing to put in a review.

Faheem doesn’t have a toaster. We weren’t happy.

As one of them put it, “bread is not good to eat in the mornings”.

You just want to make sure the wiring is sound, it is made by a licensed manufacturer and keep it free of crumbs.

I suppose the most likely cause of a toaster fire is food debris in the toaster, isn’t it? Unfortunately a difficult thing to monitor. It’s often the seemingly trivial things that come back to bite you.

You could unplug when guests leave.

And it’s also easy to overlook a plugged-in toaster.

Our cook mostly grills the bread on a skillet, but the results aren’t stellar. And he’s the only one who uses the gas stove. 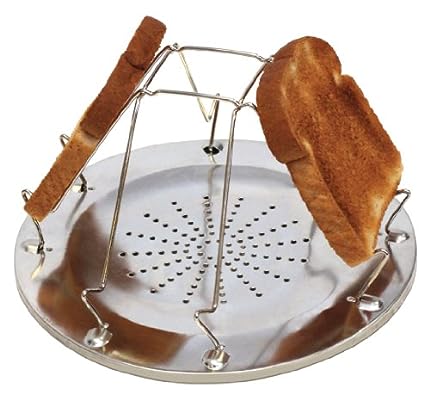 Stansport Folding Camp Stove Toaster makes 4 slices of toast at a time. It's made of durable rust resistant steal and folds to 8" x 5/8" for easy storage.

Faheem, I not only have a toaster, but an oven, a whole host of kitchen appliance that heat in one way or another, and a wood burning stove. And I’m not even there when renters are. And my house is almost entirely wood, as are most houses in my area. We don’t much build with concrete in colder climates.

I do think that renters of a room like to have access to a coffee maker, microwave, toaster and mini fridge. But that’s very American. If it isn’t common in your area, don’t sweat it.

You can get a toaster for under $10 and is no more of a fire hazard than most any electrical product in your house.

The insurance company holding the policy for my airbnb disallows toasters and microwave ovens.

They allow an electric kettle, but no cooking appliances of any kind.

Yes, my guests have wished for a microwave. No one has asked for a toaster.

My rentals offer full kitchens and I include a toaster. In my personal home, I don’t have one. I have toasters in my rentals only because so many of my guests want a toasted bagel or toasted bread with jam for breakfast.

Buy a new toaster (not a used older toaster) and all will be fine. I like the idea of unplugging it between guests.

I was just going to say, as @azreala did, that if toasters are not common in India, relay that tidbit to the guests. Travelers should realize that “when in Rome…”