My whole house rental is listed as three bedrooms each with a queen bed. Max occupancy is 6 people.

However I happen to have a full sized futon couch/bed in a small alcove room between the two upstairs bedrooms. The previous owners left it behind because getting it down the stairs was more trouble than it was worth to them. The mattress was old so I threw it out but the frame is quite nice. It is a study Mission style.

In the two years I’ve rented the house out I’ve made the bed up once because the guy who booked my place failed to ask everyone in the party if they minded sharing beds and when they got to my place it was revealed that one person did. I suggested the futon as an alternative to the person sleeping on the couch. At the time I didn’t have a proper futon mattress so I used an air mattress which worked but I imagine it wasn’t the most comfortable.

I’ve decided to get a proper mattress for the frame to provide an additional sitting area upstairs and have it ready on the off chance I end up with another situation where not everyone wants to share. The room it is in is small with no windows. It does have a double sliding door which opens to the hall between the two bedrooms and looks straight down the stairs. When the bed is folded out there is enough room to walk around two sides of the bed with the other two sides against the wall. There is also room for a couch side table with a lamp and a small stool to sit on or place luggage etc. on. I have hooks on the wall for wet towels or what not and a ceiling fan to facilitate air flow. All in all it’s not bad but I don’t consider it a proper room, more of a “just in case” space.

So here’s my question:

Do I indicate on my listing that it is available? I will not rent to more than 6 people and don’t want to have argue with someone who says “you have the room for more” so I’m in a bit of a quandary about it.

I think it would be helpful for people to know it’s available when they are reviewing my listing but then again I don’t feel right listing it as a bedroom. It is a small windowless room with something to sleep on if necessary.

What do you think?

List it as a sofa bed in common area. (Why ABB doesn’t list futon as a bed option yet is beyond me.) You can decide if you wish the guests to make it up themselves if they want to use it, or have it ready for them. You can also decide if you wish to charge for the use of it or not since the other 3 beds do provide enough space for the maximum 6 people to sleep.

Do you have an extra person charge? If so, what number of people does it kick in at?

I like @Militaryhorsegal’s idea to list it as a sofa bed in a common area. Then describe the space in your listing as an alternative sleeping space for someone that doesn’t want to share a bed.

Check your building code. Where I live sleeping rooms have to have an outside window that can be used as an emergency exit. There is a minimum window size.

Ditto! Some times there is a snorer and the roommate needs to escape.

I like the idea of including it as a sofa bed in a common room and describing in the listing that it’s more of a backup option should people like separate beds. If anyone gives you pushback that they should be able to bring 8 to your 6-max listing that will be a good indication they aren’t a good fit!

Will you have an extra charge for use of the futon? Is there a spot in the room you can keep a bin or basket with the linens and pillow they’d need? I’ve found it handy to keep my twin air mattress & linens in one bundle - I charge $35 for use.

I’ve decided to not list the futon and only discuss it when I do the walk through. I will ask people to at least use a mattress pad and fitted sheet to protect the futon. Linens for the futon will be in an armoire in the adjacent bedroom.

I have a similar listing. Four bedrooms (3 queen beds and two twin beds) plus a queen futon in the living room. Listing is currently for up to 8 guests (previously it was 10 guests, but I reduced it). I continue to list the futon as a “sofa bed” in a common area on my listing. If a group has 5 or more guests, I send a message a week before check-in and simply ask guests if they want the futon setup as a bed or a couch. I do not provide the guests access to the optional bedding for it. I keep it in a bin in a locked storage room. If a guest needs it after check-in, they have to ask me and I have to do it.

If a guest needs it after check-in, they have to ask me and I have to do it.

I have considered that but what if they need it late at night? I live right next door so I could do it but …

I ask them a week before they check-in and if they don’t answer, I ask again the day before check-in. And I tell them the extra bedding isn’t accessible to guests. I also live right next door and I will do it late at night if necessary.

I ended up not listing the availability of the futon for a number of reasons. One is I don’t want to encourage sneak-in guests and the other is, as some have mentioned its not a proper “legal” bedroom, just an overflow space.

I put this sign on the door to the space: 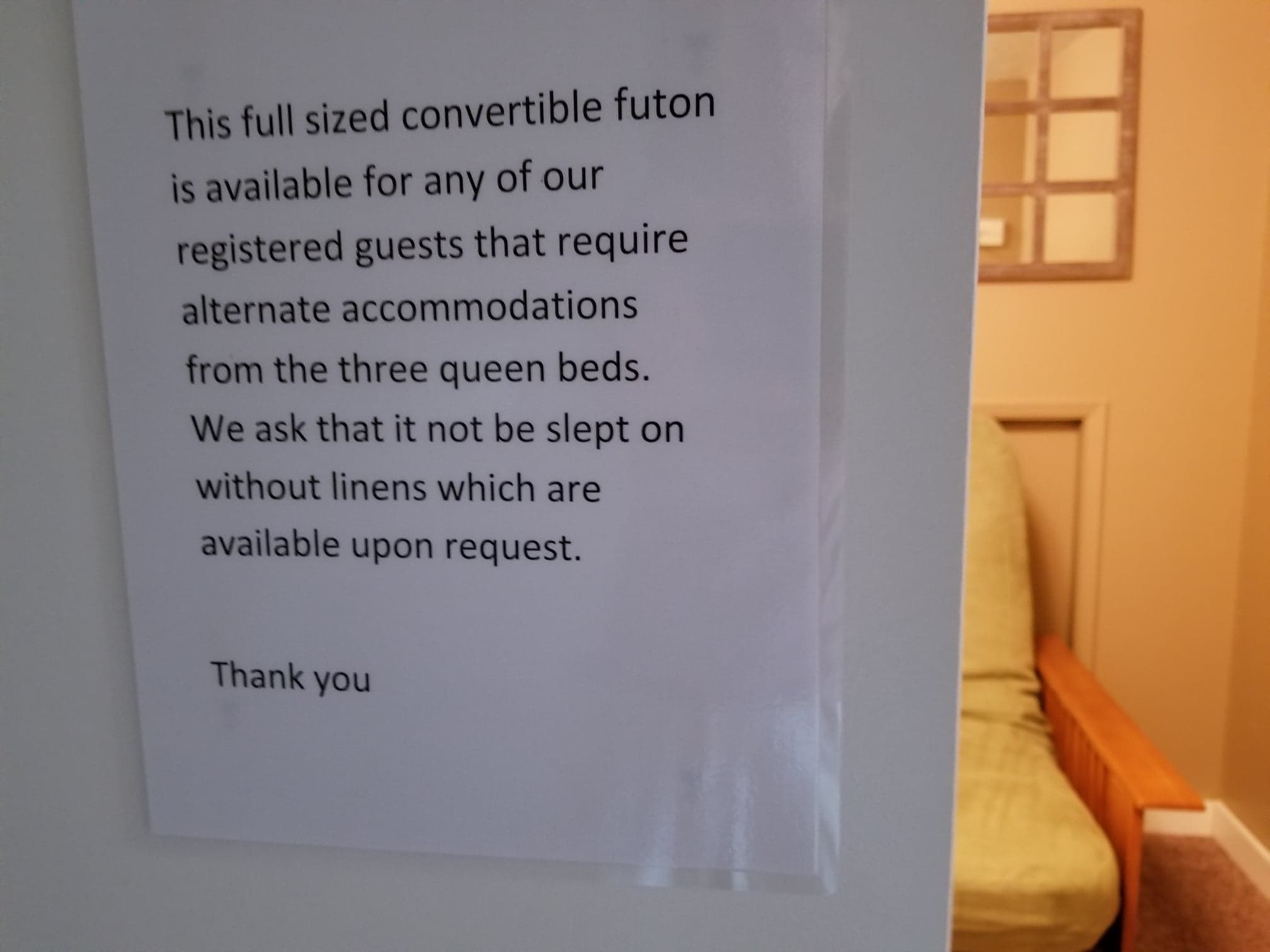 So far it’s been used three times usually in situations where a brother and sister were going to have to double up (or one sleep on a couch). I had one young lady who was very excited when she saw it was available.