I got another “tip” from Airbnb that I could make more money doing do non-refundable. It got me thinking that I could possibly do my current prices at non-refundable (I think I would need to raise them in order to compensate for the 10% discount) AND start new listings (carbon copies basically) that were refundable at the 10% higher rate as well. I have been thinking about what to raise my 2020 prices to (I do do a little raise at minimum every year (but usually more often at tiny increments of $1-$2). This would be an opportunity to raise my prices 10% and still make at least what I make now and possibly also get better quality guests (guest quality is my main issue).

On second thought, as I type this out, will they even let me do that? Or maybe they will until someone complains, if someone would have any reason to…anyways, a nascent thought as it just crossed my mind.

Thats a nope from me because the Airbnb extenuating circumstances over rides this …so I don’t see the point!

This has been around for several months. You don’t have to create new listings, you just have to change your cancellation policy to “Flexible or Non-refundable”.

I would assume two things:

That was the same line of thought for me as well. I considered it for about .001 seconds. Would have been maybe 2.0 seconds if Airbnb didn’t roll over a host with “extenuating circumstances” so often.

Nah … I’m out, I’ll keep the strict policy that I have.

This year I have had about 60 quests with only two cancellations. Both were due to extenuating circumstances in which the guest was unable to make the trip. Although I have been offered the 10 percent deal, cancellations are not really an issue. My rate is already about 20 percent above what AirBnB suggests, but I find the rates they suggest absurd.

The point is that the 10% discount would actually be what my price is currently so it wouldn’t matter about EC. They exist no matter what. And it would be an experiment for actually RAISING my prices 10% while still OFFERING the non-refundable 10% discount to those looking for the lower priced option (that is still my current price).

I agree with your numbered assumptions. I also know it’s been around a while and I don’t NEED to creat additional listings. I wrote this thread because I’m CONSIDERING doing it anyways as an experiment to help raise prices and test it.

Is it a requirement for a listing that has the non-refundable option to be listed as flexible otherwise? I currently have moderate and have no desire to go back down to flexible. And don’t want to go with strict due to the work collection requirement for moderate or flexible.

Again, you are kissing my point. EC is the case NO MATTER what, and since I would get the same payout for a non-refundable booking (because I would raise the price 10% to cover it) as I would from my CURRENT listing, unless it is canceled more than 5 days out, since I have moderate.

Folks, I am not asking if YOU woumd do the non-refundable on your listing. I am asking what your thoughts are on doing this experiment and maybe then would you do this experiment.

you are kissing my point

I think this is a typo, but I really quite like the nuisance of it. Seriously, as a writer. It’s pretty cool.

My question has nothing to do with the rates Airbnb suggests. I have seen over the past 3.5 years of doing this and slowly increasing prices $1-$2 at a time (and at times hundreds of $ more in order to “block” them out) that they will ALMOST ALWAYS suggest MUCH lower than your price, REGARDLESS of how high or low your price is.

I am not really considering it to deal with cancellations but to testify higher prices…I guess that’s what everyone here has not understood from me yet.

No, I have thought about it too with many of the same issues as already mentioned. Yes, it looks as though I can do it with my moderate cancellation policy.

I am getting what you are saying but I still wouldn’t do it because I think people will be less likely to book the non-refundable option. That the price would have to be particularly low, not just artificially lowered from your regular price. As a host, that’s why I wouldn’t, in addition to the other issues stated: EC, airbnb going against policy, having very few cancellations anyways.

As a guest, I would not book non-refundable regardless the savings. Life is too unpredictable. It feels foolish to me to do a non-refundable when I can pay a little bit more and have a refund available.

If you try it out, I would be interested in hearing how it goes!

Is it a requirement for a listing that has the non-refundable option to be listed as flexible otherwise? 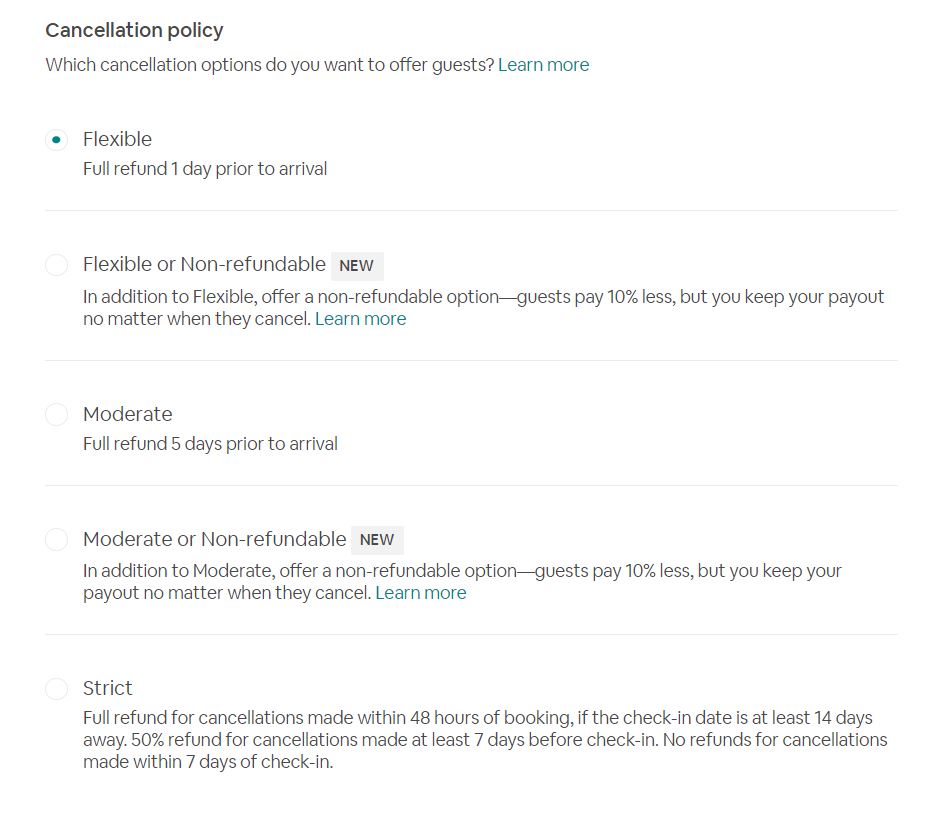 It looks like you are not understanding because in my scenario you would gladly pay 10% more than my current price. I am not sure this makes a difference when we are talking about rates of $37, $38, $49, $50 and $65 with cleaning fees if $20, $25, $52 and $62. These are budget listings and I’m thinking that those most interested in buedget listings are those willing to save for non-refundable (even though really aren’t saving because that is what my price is currently).

If I do I certainly will. I’m still waiting to hear people’s thoughts on my actual question with a full understanding of it.

you would gladly pay 10% more than my current price

Not if it was more than I was willing to pay for your place. But I still wouldn’t take a non-refundable to pay a little less for it. I would likely just keep looking. Of course this is hypothetical because I don’t know anything about your place and it’s possible you need to raise your prices anyways but my concern is that, for my own place, people may book elsewhere to get the same price but with a refund option.

These are budget listings

This might make the difference. I can see where you are coming from. I’m so curious to see how it goes.

Sounds to me like you understand me now. So instead of asking ‘would you take non-refundable for a 10% discount?’ The question for you becomes ‘would you pay 10% more to avoid non-refundable?’ That is basically the crux of my proposed experiment. It would be a way to test people’s aversion to paying 10% more for my listings more than it is a test of non-refundable or not.

BTW, most of my bookings (and thus, cancellations) are within my 5 day moderate window.

The question for you becomes ‘would you pay 10% more to avoid non-refundable?’ That is basically the crux of my proposed experiment. It would be a way to test people’s aversion to paying 10% more for my listings more than it is a test of non-refundable or not.

I should have read this thread before I started a similar thread. Would you mind sharing the results of your experiment?

Firm vs. Strict vs. Non-Refundable

Because the Extenuating Circumstances Policy over ride’s everything is that the host has in place. The guest just has to find the right rep who will fall to their side.

My hypothesis is loss aversion bias would cause more people to opt for the non-refundable option and it would be a win for me.
Loss Aversion Definition.

Ideally, we should have a third option, that would help us construct a decoy effect similar to how Starbucks encourages people to order the largest drink.

In marketing, the decoy effect (or attraction effect or asymmetric dominance effect) is the phenomenon whereby consumers will tend to have a specific change in preference between two options when also presented with a third option that is asymmetrically dominated. An option is asymmetrically dominated when it is inferior in all respects to one option; but, in comparison to the other option, it is inferior in some respects and superior in others. In other words, in terms of specific attributes Th...

A little off-topic, but points out how people can be led down the marketing trick path because they don’t use their brains:

I used to work with an arts organization that booked bands and put on dances. One of our members was working the drink tickets table one night, and being quite the funny guy, was telling people the tickets were $1.50 each (which they were) or 3 for $5.

You wouldn’t believe how many people went for the 3 for $5. In fact, only a couple of them said, “Wait a minute, how does that make sense…”.