Thank you Airbnb, for nothing

LOL! Yeah how ironic. Living in a custom-built house in tropical Mexico and accusing me of white privilege for merely stating the very accurate fact that we do have such opportunities. Then the amusing deflection of meth parents, etc.

Many first generation immigrants here have achieved success and built businesses from nothing. We know quite a few, and some are close friends. None of them benefit from white privilege. They do benefit from “land of Opportunity”, combined with hard work. Ask your Mexican neighbors.

You know nothing about me, my house or my lifestyle, so give it up. FYI, ignorant one, basically everyone has a “custom built house” in Mexico, including the Mexicans.

It’s called employing local people, working to support their families. And I have countless hours of my own sweat equity in this house. I laid every tile myself, all the floors, all the counters, all the showers. Sealed and painted every wall, built my rock shower surround, planted and maintain my own garden. I spend 3 days in the blazing hot sun every late spring, putting another coat of waterproof paint on the roof to prepare for rainy season. I’m 71 and still work full time to make ends meet.

So if you have some mental picture of a 4000 square foot gringo vacation home, with a pool and an ocean view, designed by an architect, built by a contractor and 15 laborers, you’d be dead wrong.

LOL. It is amusing when you toss something out, ignore the direct response discussion, and deflect into yet another irrelevant non-discussion.

A good start is forcing corporations to pay taxes not defer them forever, with smaller govt and reduced govt spending. 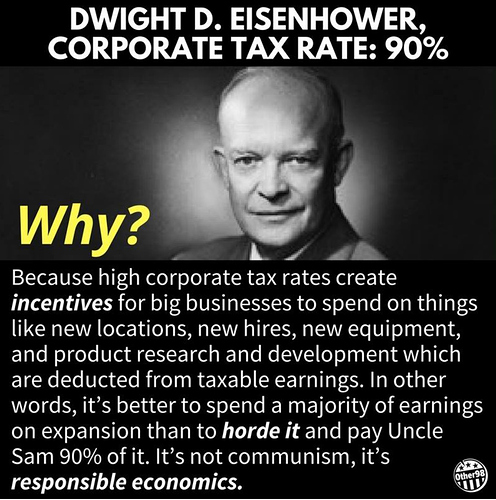 It is amusing when you toss something out,

Your ad hominem attacks on Muddy based on where she lives, her job (or not) and what kind of home she lives in are the epitome of a bad faith “discussion” so you really should just shut it.

In addition you don’t understand white privilege. It doesn’t matter how one got their station in life or how shitty their life is now. If one is white or white passing then one has white privilege. The US was built on stolen and grossly underpaid labor and stolen land. It’s still exploiting people in a massive transfer of wealth to the haves from the have nots.

I would also say that the idea that people choose to have kids is not always/almost never the reality. Try getting an abortion in some counties in Texas. Try having an abortion if you do not have money. Not every child is a choice, most are not. And not having sex is not an answer, we are biologically wired to have sex, even “poor people who have no business having kids”. (sarcasm)

Exactly, but it seems such a bad idea.

even poor people who have no business having kids

Having children and raising a family is the normal thing that humans do, all over the world, since forever. If it hadnt been, there would be no human race. Biological organisms reproduce, that’s the basis of survival of a species.

The concept that one “can’t afford” to have children, or that poor people have no business having kids is a relatively recent mind set and quite bizarre and discriminatory.

The idea that only the well-off should reproduce sounds frighteningly like eugenics to me- that’s the lead-in to thinking people should be able to prove they can afford to raise children or be sterilized.

Not to mention that there are plenty of amazing human beings who have changed the world for the better who grew up poor.

We really love our Horatio Alger stories in the U.S. And I’m sure many of us know hard-working immigrant and native-born families and individuals who have “made it.” (And we need those younger immigrants to create economic growth!)

But one should be aware of survivorship bias in thinking. It’s a logic flaw of taking into account people that had success and not taking into account those who did not, as they are less visible to us. For every success, there are many failures, perhaps more based on bad luck than lack of hard work than we realize.

There have also been structural changes in the U.S. economy that have moved the goalposts for hard-workers. My ancestors could, and did, make a living using their hands and bodies, or starting retail businesses, when they got off the boat in the 1800s. But today, laborers and service industry workers don’t make much money, and factory jobs have declined. There is concentration of market power (and price pressure) from big box stores and Amazon, making local retail shops less viable. And retail in the short term is a non-starter during a pandemic.

I don’t discount enterprising people who have pivoted and started a plethora of “monthly gift box” internet stores, but that avenue is not readily accessible to the less tech-skilled. And we’ll see how many of them survive.

I would be interested to hear what our more libertarian or free market members think of global outsourcing to realize lower labor costs. Presumably, they’re all for it. I would argue this is an ideal opportunity for “big” government. Not in the form of trade protectionism, but financial support, government-supported infrastructure jobs, and training for displaced workers.

I would agree that many, including me, benefit from white privilege. It is just a simple truth. We should not feel guilty or condemn others for the advantages they have.
.
That is entirely different from Muddy taking my correct statement RE the opportunities in America, and making a personal attack. Please rewind and you will see that. My calling it ironic is a pretty reasonable retort to an insult. I will leave it there.
.
My point remains. America is a land of opportunity. Ask the millions trying to immigrate. Ask our landscaper who came from Guatemala with nothing and spoke only Spanish. He’s a heck of a guy. He built a business, owns a house and is raising a family.
.
Ask my friend from Morocco, who achieved his dream and became an airline pilot. He also built two businesses.
.
Ask our friend from Kenya, who came here as a student, and is now a CFO.
.
They certainly did not benefit from white privilege. With hard work, much is possible. Again - pursuit of happiness. Their stories are uplifting and inspiring.
.

The US was built on … labor / … land. It’s still exploiting people … transfer of wealth from the haves to the have nots.

.
Some will always have advantages. History is full of nasty stuff, including our times. If you have ideas for solutions, I am all ears.

and deflect into yet another irrelevant non-discussion.

The difference is that I acknowledge the white privilege I benefited from. I support the role in government of helping those less fortunate than myself and not pretending that there is an even playing field.

I don’t don’t play dumb like Oxford educated Senator Kennedy did yesterday when he feigns ignorance on implicit bias. Nor should you; It’s not a good look for anyone, let alone a business owner.

Merrick Garland hearing: Sen. Kennedy presses Garland on meaning of implicit bias, asking if it means "I'm a racist but I don't know I'm a racist?"

you will see that.

No, I reviewed it all prior to my post.

If you have ideas for solutions, I am all ears.

For starters, raise the minimum wage to at least $15.

The difference is that I acknowledge the white privilege I benefited from. I support the role in government of helping those less fortunate than myself and not pretending that there is an even playing field.

.
Every person here is “doing pretty well” (earning a living wage or better). It is an absolute that the game is rigged and the playing field is tilted. I agree and never said otherwise. I do not dwell on it. I simply don’t like being personally attacked during what was otherwise a normal discussion. Please do not pretend that her remark was innocuous. We can all drop it now.
.
Ok so now what? Hyperbole such as “the rich exploit the poor” or “our ancestors stole land from native Americans” is not constructive. It gets us nowhere.
.
The question is what might we do to effect fair and reasonable change. People love crying out against injustice. Most are not interested in change if it comes with personal cost. There are many areas that we can look at. I have mentioned several.
.
And yes, we do support a general need for “reasonable social services” (this is not a welfare state). We do strongly believe in affordable heath care and education. We are interested in things being better for more.
.
And yes … we voted accordingly.

For starters, raise the minimum wage to at least $15.

.
If it were so simple, min wage in France and Germany would be much higher than 9-10 Euro / Hr.
.
So, what about the workers who lose employment as a result (some businesses will close, others will reduce staff). What about the currently unemployed who will really struggle to find a job - since the cost to a prospective employer is no longer tenable?
.

.
Not anecdotal. Real. Factual. But, you are welcome to state “data” that refutes the notion (opportunity in America).

Not anecdotal. Real. Factual. But, you are welcome to state “data” that refutes the notion (opportunity in America).

So you don’t know what the word anecdotal means?

But, you are welcome to state “data” that refutes the notion (opportunity in America).

So you don’t know what the word anecdotal means?

Oh I do. Anyway you are not interested in a discussion so … moving along.

The concept that one “can’t afford” to have children, or that poor people have no business having kids is a relatively recent mind set and quite bizarre and discriminatory.

I should have put that in quotes, I do not subscribe to the idea that poor people have no business having kids

Every person here is “doing pretty well” (earning a living wage or better).

I’m sorry, but you’ve just gone waaaay too far. I am NOT “doing pretty well” for the past year, and you don’t know diddly squat about how I or anyone else in this forum is doing.

Historical facts are not “hyperbole”. I live on land that rightfully belongs to my neighbors who are citizens of T’aaḵu Kwáan & A’akw Kwáan in Tlingit Aáni. The rich are exploiting the poor; see the IRS audit reports for poor vs. rich, and read the tax rates and deductions for the rich in the tax code.

Your nitpicking neoliberal crap and your promotion of selfishness over community, on every point of every post made my others, is becoming increasingly more tiresome.

The horse is dead. You can throw away the whip now.

The researchers found a link between the participants' own income, the income of their social circle, and how they felt about redistributing wealth in the US.