Hi,
just wanted to ask if someone else is experiencing really low season here in Europe. I am renting couple of flats in Prague, Czech Republic, which is supposed to be one of the most demanded cities on Airbnb, but there are literally no bookings in January.

I started in September and had the whole month packed, perhaps only 2 nights free. October was also OK then November already low and December mostly New Years and pre-Christmas, and now in January there is simply nothing. Is this normal for someone hosting in another European city for longer time? It makes me even consider renting the place long term…

I’m not in Europe but I think your problem could be that you now no longer get the boost Airbnb gives to new hosts when they first list their accommodation. It’s pretty standard for this boost to help new hosts to get the first few months fully booked.

I agree with @jaquo - January can be slow, true, but you have lost what we call The New Host Bump. Your listing is no longer promoted near the top. That’s how Airbnb hooks you. Welcome to the real market.

Busy here in London. Fully booked Jan, a few days free in Feb and March. I could probably open April up now to start taking bookings but I’ll wait a bit.

Still. We’re not really Europe anymore are we. Brexit so far hasn’t hurt tourism but maybe everyone’s rushing to get a trip in before passports are necessary again.

any idea how long does this boost last? most of my bookings were kind of last minute, usually 5-10 days before arrival…

That’s how Airbnb hooks you. Welcome to the real market.

I wonder how many people stop hosting when the boost wears off? But yes, once it does, you’re in the real Airbnb market. Some hosts are so encouraged by the boost - and calculate how much ‘easy money’ they’ll make - that it comes as a shock to them when they realise that it isn’t really as easy as that!

What’s a shame too is that Airbnb encourages new hosts to have a low price so that chances are that the host has wasted the boost and not made much at all. Often, these hosts have listed their places at a lower price, maybe in order to get some reviews under their belt, and imagined that they’d put the prices up once they had a few star ratings. Then they find that they can’t put the prices up because the bookings have dropped off. A tricky situation indeed.

any idea how long does this boost last? most of my bookings were kind of last minute, usually 5-10 days before arrival…

I’m not sure that anyone knows exactly but I think it’s between four and six weeks.

Dev, I just returned from Prague. I booked a hotel in Prague 10 from Dec. 28 to January 9. The hotel Iris Eden and it was €47 approximately. The lowest thing I found. I could not find any on Air or Wimdu for better than that rate because the NY holiday was included. Low season is beginning there. We noticed The crowds totally thinned out right after NYE. Some hotels in Prague 1 were advertising low rates.

Here are the reasons I booked a hotel, and this one specifically.
Availability and affordability over NY,
Good reviews on Trip Advisor
Super convenient tram location
Breakfast for only five E
Front desk that could book activities, sell tram tickets or book my outgoing cab
Daily housekeeping, fresh towels and turndown
Location right next to big mall and Tesco was awesome for us.
Loved the room, super comfy.

That’s just me. Even though in Prauge 10, just 15 mins to city center. I even took the 22 directly from the hotel to the opera at the national theatre.

Where is your listing, would you share the link? Are you also on Wimdu?

The only ones traveling are the Russians, because they have a delayed christmas/new year.

And to be honest, I would not choose to go the Prague in January… too cold. I have been there many times, but always in spring and summer.

There are also some wonderful designer-y hostels in Prague that seem to be incredibly good value, even for a double room with en suite bathroom. Shared rooms start at $6 a night so it seems that there’s so much competition there. If I ever make it to Prague, I have my hostel already picked out.

Eeek, some hostels looked to be dodgy. Make sure it is in a good area, at least Prague 1!
The fact that we got a budget hotel allowed us to stay the full 12 nights there, as opposed to the boutique hotels which were double or triple the price.

I would not choose to go the Prague in January… too cold.

We LOVED the snow in Prague! Although the uber cold meant you had to duck into a cafe or something more often during the day because you are walking so much.

Eeek, some hostels looked to be dodgy.

This is the one I’ve got my eye on. Not that I expect to be in Prague in the near future but it’s on my wishlist. It’s in Prague 7… I’m not so sure I would stay out there, just to save a buck or two. But it does have good reviews. Pretty far though! In a hostel, don’t you share the bathroom??

There are a ton of choices, especially if you go off season. Prague is a really really large city… Much bigger than I had pictured… !

There options to have your own bathroom. A double room with an en suite there is $35 - or was, last time I looked. I’m having a bit of a hostel phase at the moment.

There are plenty in Prague, it seems. So much competition for cheap accommodation.

But you could book my hotel for $35 US right now and be closer via the tram. Have a complete hotel room. Three star one.
We went out to Prague 7 to the technical museum, and it was “out there.” Kind of in the burbs. Seemingly further than Prague 10 where I stayed. Proximity to the tram line is key.

I saw some cute looking hostel places right in Prague 1 that looked nice. Also some boutiquish hotels as well! (out of my price range when I booked because it was over NY.)

Sorry, this does not help our OP… he needs to share his listing so we can see what’s up! If we go again we should book with him! LOL.

And to be honest, I would not choose to go the Prague in January… too cold.

You are wrong about only Russians traveling to Prague in January. There were lots of different types of tourists. The snow was an absolute blast and only added to the holiday cheer!! 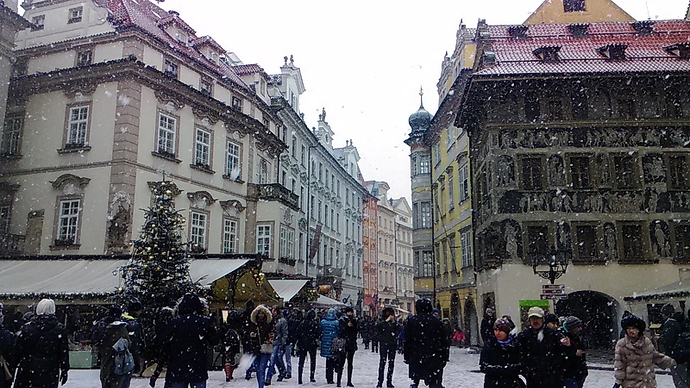 You will excuse me for sharing my vacation photos, but this one cracked me up. As soon as it started snowing by the clock tower, all the touron grabbed their selfie sticks, including us. So you see the guy in back of us is visible with his selfie stick, and we are no doubt visible with ours. The sudden snowfall was one of the highlights of our trip.

It’s like a fairy tale. EVERYWHERE you look is a gorgeous picture!