Does anyone have a recommendation for where to buy pillowcases only? They must be 100% cotton, white, and not cost an arm and a leg. Ideally not the kind that shrink up to being almost too small either (talking to you Target). I’ve searched Amazon, but I always seem to find the ones made by a company called American Pillowcase. We tried some of their sheets and their white wasn’t a true white, it had a slight yellow tinge so I don’t really like them.

Can you sew?Or do you know someone who can? Pillowcases are super easy to make, usually a beginner project in sewing classes. Prewash the cotton white fabric, then make the cases, no shrinking because you preshrunk the fabric. Less expensive as well. I have made all the extra pillowcases for my listing.

I’d look at Marshall’s/TJMaxx/Home goods. I’ve used Utopia bedding and Amazon Basics from Amazon but am not sure if they have just pillowcase sets.

I had to laugh out loud at this. I am the farthest from anyone that could sew, although it’s a great idea. I don’t know anyone that sews either. Maybe you’d like to start a business?

My husband actually said that I should offer when I was telling him about it.

It would only work for people of the United States though. Shipping overseas is too ridiculous.

I know you said you want 100% cotton but if there’s some flexibility I use Target Microfiber white pillow cases. The come out of the dryer nearly wrinkle free (I don’t iron) and have held up better than any other pillowcases I’ve bought.

Overstock.com has many options

I’m happy with the Amazon Basics white pillowcases. The all cotton ones are a natural white, not a “brightener added” white. 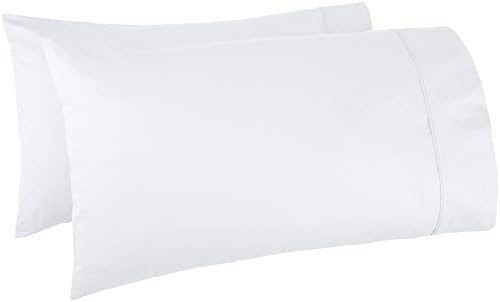 @NordlingHouse What do you mean by a natural white? I don’t want anything that has a slight yellow tone as they won’t match my sheets. But these look like what I’m looking for otherwise.

Thanks @Lynick4442. I just am not a fan of microfiber, although I realize a lot of people like it.

Uh-oh, just read this review. “I bought 20 of these pillow cases for the rooms at my small motel. The fabric is somewhat thin and the side stitching on every, single case (all 20 of them) is crooked.”

Pet peeve of mine!! I guess I’m just going to have to spend a bit to get what I want.

You might also check the clearance sections of stores like Bed, Bath and Beyond. I really like when I get a set of sheets that has 4 pillowcases. Over the years I now have a surplus of pillowcases. For some reason it’s the top sheet that goes first and end up with extra fitted sheets and pillowcases.

@KKC Hmm… I feel like the pillowcases go for us. I just want about 6 extra back-up. I do have complete set of unopened sheets so I could put those into circulation. I’ll check all the places you suggested. Usually BB&B has odd colors on sale but I’ll keep checking.

One would think. I also have a huge stack of washcloths. I read all the horror stories of ruined ones here and I overbought.

I know I saw white at my local Marshall’s about 3 weeks ago because I was shopping for my new bed. I’m surprised the Target ones shrank on you. Were they the Threshold line?

I recently got our stuff to open up our airbnb unit and ordered pillow cases from Directtextilestore.com. It is a hotel/restaurant supplier - there are many similar others that I explored and researched but found the website/prices/selection/options the best on their site. They have a section of 100% cotton sheets and pillow cases and we’re happy with the ones we ordered. Their customer service also had great communication which I appreciate. Also, their stuff is made for the rigors of repeat washings and such which I valued. Some of the selections can only be ordered by a case of 144 but some (including “Oxford Super T-300” which we got) can also be ordered by packs of 12. Also, a lot of their stuff can be ordered as a single for a sample, in case you want to check it out ahead of time. Most of the advice I got for linens was Overstock and Amazon and used them for many things but I like the idea of being able to order more sheets and pillow cases later that will match for sure and overall got the best combo of price/quality/durability from this textile place. We also got towels and kitchen linens from them. They even have pot holders! I certainly don’t need a case of pot holders so just ordered a sample in a few different colors to get the few I needed. It also occurred to me that if you know someone else that has units you could order the bigger cases and split them to get the best prices. Hope this helps someone.

Yes they were Threshold. I just generally didn’t like them that much. The whole set was slightly small after washing and the seams were off kilter. I want champagne on a beer budget, LOL. I loved the Macy’s Martha Stewart percale line, but they quit making them and replaced with a higher TC and way more expensive.

Just for reference, if you order a 12-pack of the pillow cases I mentioned above, they cost $2.81 each, which is a pretty good deal even if it doesn’t seem like you need 12 pillow cases. It’s only $2.34 each if you order a case of 144 which could be useful if you have several units, a lot of pillows or some other folks to split the case with.

Maybe check ebay. And if they don’t have what you want today you can put a notification to be notified of new listings.

Machine wash . Material: Cotton . Color: White . Size: Standard . The item must not have been laundered. We don't inspect for odors. We re not responsible for pictures showing incorrectly on your monitor. | eBay!

I had a pair of shorts I loved. It took 3 years but I finally got a replacement pair in great, like new condition on ebay.

I@JJD Thanks!! I actually looked at that site a couple of days ago and those exact pillowcases. Looked like I’d have to buy a case of 144 though. Maybe I’ll ask on my local FB group if anyone would be interested in pooling resources.

I just checked it before I wrote my post so I could make sure I was giving accurate info, there’s a drop down menu next to the pillowcases line and you can choose “pack of 12”.