Do you ever see reviews that make it clear the guest was clueless?

I was snooping on my competition and found the following review. The condo pictures are accurate.

I think this person doesn’t understand ocean tides affect the intracoastal waterway so was disappointed in the low tide view.

The toilet paper comment is just wrong. Most condo rentals in this area don’t provide any TP, paper towels, cleaning supplies, and other basics. They were lucky there was a “starter roll”

This was disclosed in the listing description. 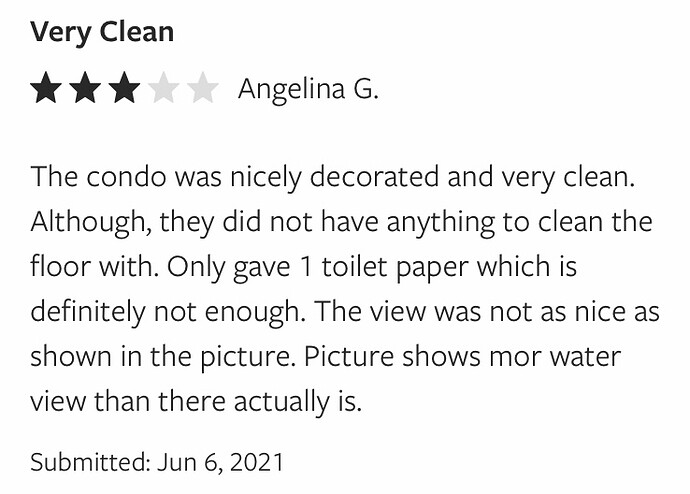 Since the comment about the water came right after the toilet paper, maybe the guest meant the toilet bowl level?

Omg yes, we had a high maintenance guest comment in their review that he wished there was more landscaping. Keep in mind it snowed the previous week and all our exterior pictures are seasonal, so I’m not sure what sort of magic he was expecting?

Complaints about the well disclosed location bug me the most or the expectation of total quiet on Main St. I have a picture of some lovely chairs in a common area and label it as a common room. I got a comment that these chairs were not in the room. Someone also suggested an exterior paint job (I was budgeting for an $18,000 paint job so I didn’t rush out and fix it. People also expect my small New England town to have a bustling little main street, but like many such towns we have a big common, a couple restaurants and everything else has moved to the malls. My husband is really a magician but he has yet to remedy these deficiencies for us.

Someone also suggested an exterior paint job (I was budgeting for an $18,000 paint job so I didn’t rush out and fix it.

I understand this frustration.

I purchased my condo as a renovation project. There is a letter to guests on the refrigerator about the project moving slowly but surely as I had the money.

One guest decided to insist in the private review (glad it was private) that my bathtub needed to be ripped out and updated to a walk in shower. It’s on the todo list but the existing tub works fine.

Because they pay so much, lol

I had a very picky gentleman here who complained that I didn’t offer cable TV in a $60 room (NOT a listed amenity), and that I should replace my linens with 600 count pure cotton. He was the only person that asked to use the iron and ironing board.

You’re always going to get reviews where it’s apparent the guest just doesn’t “get it”, for example making a negative comment about the weather as if it’s something the host can control!

Most people reading such a review are smart enough to know the reviewer is out of line, and as I alluded to in another post, if they do take it seriously then you probably don’t want them to stay anyway!

I have found that there’s often a correlation between the way in which a guest communicates with you before and during their stay (such as the questions they ask), and what sort of review you will ultimately get (although of course this is not always the case).

someone also suggested an exterior paint job (I was budgeting for an $18,000 paint job so I didn’t rush out and fix it

lol, i have had a few people give me similar advice, like how the tennis court needs to be resurfaced (true, but I don’t see a ROI with that, you can happily hack about on an old court, I’ve got better things to spend money on). and the location thing!! omg, what is wrong with people, they see the map, they choose where to stay, then afterwards ding you for location because you weren’t right next door to the event they were attending?! meanwhile other people, usually the happy travellers, will say how well located we are. this is such a personal rating and is meaningless.

This just happened to me this week, most reviews comment on how nicely my newly renovated condo is with this exception: guest didn’t like that one of two closets in one of the bedrooms had been converted to shelving, she also found it “odd” that there were “random items “in the drawers and closets, for example:toilet paper, hair dryer, pillows, blankets . And to top it off she concluded that the unit was “old and needed a refresh”. Ouch, we had replaced every bathroom, the entire kitchen, every furnishing, all flooring, within 9 months ago. It probably wouldn’t hurt so much but we’re still paying it off, so it’s unlikely we’re going to give it another refresh this year.

Try not to let it get you down. Some people seem to think they have to come up with complaints or comments or suggestions even when nothing was actually wrong. Some hosts have even had guests leave nice reviews and
5 star ratings, but send a long list of suggestions in private feedback, from unsolicited advice on decor, like the color of the curtains, to absurdities like suggesting that the host add another bathroom (with that spare $10,000 you had kicking around you didn’t know what to do with).

This topic was automatically closed after 36 hours. New replies are no longer allowed.