No Guns Allowed - is that possible?

Is it okay to say “no guns allowed” in the house rules?
My place is in Massachusetts. I have no idea how that sits with the laws about
licenses to carry concealed weapons. I just know that my husband and I don’t have guns,
don’t want guns, and don’t want them in the house or on the premises. (I suppose they’d need
to leave them in their rental cars? Is that even legal?)

Absolutely! Your house and you’re within your right to demand that.

This question came up on the AirBnB subReddit a while back, and, yes, the consensus seems to be that there isn’t a state in which you’re not entitled to prohibit guests from bringing guns.

Two hosts near me have had guests leave guns behind (in one case a loaded hand gun!) in the last year or so, so it’s probably a good idea to try and dissuade that kind of imbecile from renting!

Fortunately, your fear does not allow you to restrict that right elsewhere.

I would not want a guest to show up with a gun but I don’t think I would mention it in my listing. And how would you know? Unless they had it in the open.

I own a gun but prefer my guests not have them in my home. I have no way to enforce this so I don’t attempt it and don’t put anything in my listing about it.

Hi Felix - I actually don’t even want a gun in the car - but I realize that my guests will be coming from near and far and might not be able to leave their gun at home. I recognize the law in the land. But, as we are uncomfortable with guns, I thought I might be able to ask them to leave the guns out of our home. Domestic violence is an issue - whether in your own home or on vacation. I don’t want to break any laws by asking. That’s why I threw the question out there.

Why the fear of having one left behind? They don’t jump up and become animated on their own.

Children can find them and presume they are toys. Have you honestly never heard of this happening? smh.

The housekeeper caught this one because she was putting things away in kitchen drawers, but it could easily have been missed and found by the next guest.

I’m answering on the assumption that you are genuinely asking the question; not just being sarcastic. I have never shot a gun. I don’t really know how they work, so I would be afraid if I found one in my house. My husband was almost shot when his brother was cleaning his gun in the living room of their shared house. The gun went off and the bullet lodged in the wall of the bathroom where my husband was taking a shower. My husband’s brother is an armed security guard and is very experienced with guns. One time when my husband was at a gun range a gun accidentally fired. The bullet ricocheted all over the lobby barely missing people. I’ve heard countless stories like this. In case you’re planning to suggest that I learn to use a gun; I have a scar on my optic nerve in one of my eyes. As a result, I don’t see spacial relationships correctly. It would be a very bad idea for me to use a gun.

I repete myself: my questions about letting my guests to use my kitchen has had a whole new perspective in the forum…

I will let my emoticons speak for me:

Accidents happen among people who have been taught “safe handling” all the time. Just like some people post their concerns here about kayaks, pools, or bicycles, some have justifiable concerns about having guns around their homes and families. I could argue that it’s unfortunate that people think it’s a good idea to carry them around with them everywhere.

Yes, same here in Canada. The question would have to be: “Guns Allowed - is that possible?” I think Americans get nailed just trying to sneak Mace across. That said, way too many gun incidents are happening here in Toronto now. Quite alarming. Way too many knife fights also.

This one is a no-brainer. You can absolutely not have a gun in my home. Sure you can own all the guns you want but it’s my house and you’re not bringing them in here. End of story. Your right to have a concealed carry firearm and your right to own a gun end where my right to make the rules on my property begins.

I put this image “no firearms” in with my pictures and included a line saying no firearms allowed in the house in my rules. The USA has millions who are afraid to go get a cup of coffee without a concealed weapon in their belt. Many of them will tell you that Obama & the United Nations want to confiscate everyone’s guns and put us all in FEMA camps. 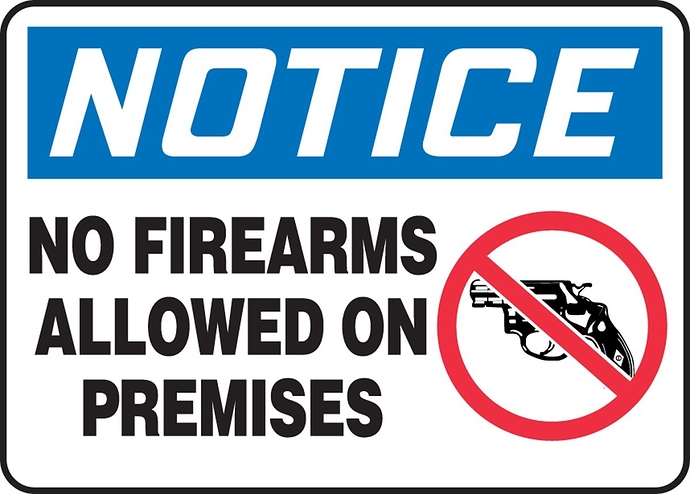 Fascinated by the replies to this thread. I can’t believe that you are not able to let people know that you don’t want them to bring a gun in your home in the US.

Of course you can prohibit guns on your property. Regardless of the 2nd amendment and concealed or open carry laws, private property can always disallow guns.

Think cigarettes… Of course they’re legal but you can still ban smoking on your property, even outside. Marijuana is becoming legal in more and more locations but you can still state “no marijuana”. You can also ban people from consuming alcohol, etc.

You can ban just about anything you want on your private property as long as it’s not based on race, religion, sexual orientation, etc.

So glad I don’t have to deal with this being in the UK. I certainly wouldn’t want a random person bringing a gun into my place.

Totally agree with your right to not wanting guns on your private property.
As sad as this sounds, the facts don’t lie… every single mass shooting in the recent past has occurred in designated gun free zones like schools, etc. and you may be putting yourself at risk planting a sign in your yard by letting a potential thug know not to expect armed resistance.
I grew up in Switzerland and live in a small town where people find it normal to leave their doors unlocked and even keys in the ignition of their vehicles.
And then they keep a gun handy in a biometric safe next to their bed because they understand that “when seconds count, law enforcement is only minutes away”.
It is a matter of respect - you don’t want guns in your home and others don’t want to be told that a guest is offended by the presence of guns.
I have airbnb host friends who have a gun collection in their home which is why they will not accept families with small children for safety reasons which has been twisted as discriminating against the guest based on familial status which we all know is a bunch of garbage under these circumstances.
Love anyone who politely expresses their opinion and / or disagreement - we can learn so much more from each other listening than screaming LOL:slight_smile:

Yes, my house rules state no guns or weapons of any sort are allowed. I don’t know if I can enforce this from a practical perspective because I don’t search my guests or their luggage. But I’m hoping it would turn away those who would likely bring guns into my home. And if I were to see a gun or weapon I would be on solid ground to cancel the guest for breaking house rules.