Is the $250M enough? Monthly losses across major cities around the world

Estimating monthly losses based on occupancy rates on insideairbnb.com.

Based on what we’ve heard, the 25% cancellation payouts don’t have any material impact on the level of losses.

Especially looking at folks that are running multiple properties. 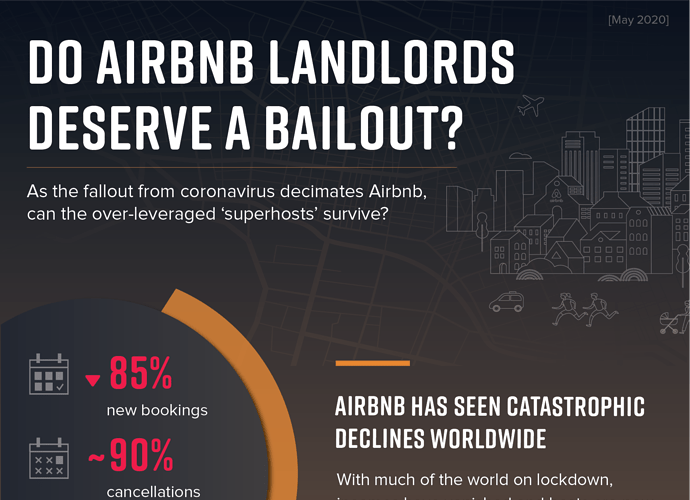 Especially looking at folks that are running multiple properties.

Investor hosts don’t register a hit on my sympathy meter, not even a twinge. All these folks using the rental arbitrage model will just have to suck it up, it’s what happens when you build a business with a foundation of sand.

Other investors, well maybe you should have tucked a bit away for a rainy day, or as it’s otherwise known plan ahead for all eventualities.

Most of these guys are shit hosts anyway so no bad thing if they disappear.

I don’t believe Airbnb hosts/landlords/slumlords deserve a bailout to any degree greater than anyone else. That said, I do think there are many flaws with the capitalist model. I think there are many people who are in the Airbnb universe (cleaners, resident hosts who depend on the income from one or two properties) who are deserving. But the word “deserve” is troublesome. In the US the fatcats will get rescued again and again while people at the bottom of the economic ladder suffer.

Airbnb is just a part of the tourism industry that’s going to suffer for awhile.

well said. some harsh lessons to be learned, and probably productive long-term to flush out the system

Just to be clear, the $250M fund is not a bailout for hosts. It’s an attempt to return some of the money that hosts would’ve received if Airbnb hadn’t modified their extenuating circumstance policy to give blanket refunds to guests (which benefited Airbnb and guests but not hosts). The purpose of the fund is simply to deflect lawsuits, not bailout hosts. If it were a bailout, then host cancellation policies would have nothing to do with it.

Where do you host @samsmummers

Concur with general tenor of comments. Unless you’re big enough to rig – er, excuse me “influence” – the system (regulation, taxation, etc.), or amoral enough take the money, change your name, walk away (preferably somewhere with no extradition), or otherwise have means to insulate yourself from consequences (cue “Hail to the Chief”), you are subject to the higher reward, higher risk equation that governs business enterprise.
Sorry, the political bit snuck in there.

wow some harsh comments
I have been hosting for 9.5 years - started with a room in my home - 1 for jsut guests - then my flatmate left so rented her room on airbnb longer term at same rate as rental - mostly students stayed for 6-14 months depending on thier course- then I got asked by people to redesign thier homes for airbnb market and manage them - i have had 87-98% occupancy year afrer year - i dont earn alot but i was starting to build a biz - bringing in artisan makers to upcycle homewoners furniture - special building who work in restorations architects who understand that these homes were also promoting thier work - upcycling philisophies and now its all gone - i am a super host - lost all my income - no i didnt get any of the $5000 offered - so am stuck
i am not a horrid person i love doing airbnb it allowed me to travel while being still - all these comments are making me sad that airbnb became something other than a force for change and good in urban regenerating areas - helping people stay in thier homes work from home - so much good came from it -

They may be harsh, but in the context I think they are fair.

I think Airbnb and other STRs has been a massive money maker for many involved with some literally making millions. @Antonia_Clare_Grant

Although I think Airbnb has benefitted the individuals and large scale property management companies involved and in some areas has brought income into an area, it also has a dark side and is not always a force for good and change that you allude to in your post.

STRs have led to long term tenants being evicted, local people being priced out of living and working in their communities by STR landlords. It has also transformed many cities and tourism areas; not necessarily as a force for good, when local services have been pushed out to provide amenities for the STR market and prices increase to meet the needs of the tourism market.

Like any small business why not diversify and look at how you can adapt your offer to the long term rental and purchase market. @Antonia_Clare_Grant

Sounds like you had built a great add-on business in the STR market, and sorry to hear that this random event has impacted you so much.
Could you pivot and offer your marketing expertise with an emphasis on sanitizing/cleaning, to those hosts who may have deep enough pockets to ride this out?
I never assume that Airbnb’s intent is to help people or be a force for good in getting money flowing into locales, although it makes a good story and may be a side effect of their actual intent: to maximize profit.

It has also transformed many cities and tourism areas; not necessarily as a force for good, when local services have been pushed out to provide amenities for the STR market.

Many cities, in the early days, actively encouraged the “boom” in STR properties, both by promoting their city as a destination and by getting into bed with the budget airlines to provide Europe wide links to their cities.

Barcelona is a classic example of over promotion and over development of tourist flights, Ryanair must have made well over a billion euros during the past decade or so, between the initial traffic to Girona and now to El Prat.

Mistakes have been made, in many towns and cities, in relation to STR, but to portray STR as the sole culprit is wrong.

Absolutely, don’t think anyone said they were the sole culprit, but certainly a catalyst that created a demand for property leading to higher rental and purchase prices, for flights so budget airlines increased capacity and for local amenities to put up their prices. @JohnF for example.