Giving this a second try as I think it’s fair to have an accurate portrayal of who I am and why I am here. Yes, I made a mistake with my first post by including a link to a laundry survey that 90% of readers would have missed because it was just a link at the bottom of my post but the OneBox software blew it up and turned it into the only thing you could see in my post. I own that, it wasn’t my intention and I did read and review not just the community rules, but also lots of other posts about product and tool recommendations before making my first post and I thought it conformed (until the onebox thing, which you can’t see until you actually post)

I’m a passionate Airbnb host here in Milwaukee, WI, USA. Fair warning, I drink the Airbnb kool-aid and am a huge fan of their approach to hospitality. I also believe that the COVID-19 pandemic will be the tipping point that pushes Airbnb to the top of the overnight travel ranking. I think it reshapes the marketplace in a way that is very favorable to small time hosts who aren’t so over-leveraged that they can survive the insane reversals in revenues in the new world created by the pandemic. From Stay Alfred to the property manager with 50 units and a staff of employees, those models are severely challenged moving forward which shifts the power back to Airbnb as the marketplace and individual hosts as the providers. A rare example of a rapidly consolidating industry suddenly going back to its roots but at scale.

I stumbled into hosting 4 years ago when I relocated to Milwaukee from San Francisco but was traveling over 150 nights a year. I listed my new home in Milwaukee and after a few months I found myself spending more time in Milwaukee than I originally envisioned but was homeless because my place was nearly sold out for the entire summer! After wearing out my welcome at my girlfriend’s place I got an apartment across the street and went to work improving my listing and turning it into a full-time Airbnb. When my tenant in the other half of the duplex moved out a year later I converted that into an Airbnb as well and at the same time I rented the house 2 doors down and turned it into an Airbnb as well which eventually afforded me the opportunity to purchase it from the landlord.

Slowly Airbnb has consumed more and more of my life. I always had dreams of being en entrepreneur and after 4 years I woke up one day and realized I was already doing it with Airbnb!

Thus, I was emboldened and In January this year I quit my awful corporate job to start a cleaning company to support my amazing house cleaning team who have become a part of my family. It’s a worker owned collective that exists to support and empower women with no formal business training and who were forced to work in the grey economy. My goal with that business is to perfect the model then open source all the documents, licenses, and structure so that similar groups can spring up around the country and more people (especially immigrant women) can take control of their finances and be better able to participate in the formal economy while providing essential services at fair wages.

At the same time in January I also founded a start-up linen service for Airbnb hosts that eliminates laundry for hosts. Milwaukee was named as Airbnb’s top destination for 2020 after 800%+ reservation growth from 2018-2019. I was suddenly facing huge competition from both new hosts and the big companies moving into town (Sonder, Stay Alfred, etc.). I have a great relationship with the city council and they kept asking me to meet with new hosts to informally help them become great neighbors. Laundry and cleaning popped up in every single conversation, so I took the gamble and rolling with it!

Fire and flag away!

THANK YOU for the introduction. Your entry into AirBNB seems very organic and insightful; I’m sorry that timing for your full time transition was ominous but glad to hear that your business is taking on this new dynamic.

You’ll find a broad mix of people on this board, very opinionated but also passionate and mostly respectful and helpful.

Fire and flag away!

Welcome to the group. Your lengthy bio felt like a sales presentation. If you are here to learn & share super Welcome.

If you are here for new customers, be aware this is an international forum. USA based hosts are scattered.

I’ve stayed at dozens of Airbnb’s in multiple countries. Love meeting and interacting with hosts from all parts and absorbing as much as possible.

What’s with the sales presentation comments though? How is that productive to the conversation?

Why don’t you ask me what my intentions are instead of speculating in a public forum in which people are so terrified of being spammed that their flagging my response to questions about bleach.

Airbnb is a commercial endeavor, nobody is hosting for free unless you’re donating your place to one of their official initiatives like First Responders or Red Cross Relief.

I’m here to learn. Sometimes that learning could involve asking hosts things. It’s a normal part of the process. I have nothing to sell you except that I’m passionate about hosting. The fact that I’m an entrepreneur doesn’t make me spam.

What’s with the sales presentation comments though? How is that productive to the conversation?

This a forum, folks have opinions; and while you may not like them, or disagree with them, they are still free to post them.

Absolutely, and I’m free to challenge baseless accusations and try and steer the conversation into something more productive.

steer the conversation into something more productive.

Since you asked: I see that in one of your listings you have a smart washlet on the toilet. While not all listings warrant them, my listing is more luxury resort oriented and I think it could provide my guests another ‘WOW’ amenity.

Below is a TP Topic where I contemplated putting a smart toilet in my guest house bathroom. I talked myself out of it, not wanting to create another problem that could go wrong, but the with the washlet, if something broke, I could just swap it out to a regular toilet seat. The prices for them have come down dramatically and that has gotten me considering installing one.

My questions for you (or other hosts that have them):

I have a high end Toto Neorest smart toilet in my master bathroom. While it significantly reduces the use of TP, it is also much more sanitary that using TP, as well as providing a number of other conveniences. Once you have it, you don’t want anything else. Recently I contemplated putting this less expensive smart toilet I saw at Costco in my ABNB guest house. I eventually talked myself out of it because I concluded: if it broke, I’m up Sh_t’s Creek (PI) with my guests. Better to mi…

I agree there’s some danger of it breaking and another thing to maintain in the house but similar conclusion that if it doesn’t work it’s still a functioning toilet seat and I can easily swap back to the standard $30 toilet seat if really breaks down. The TOTO one feels very sturdy though and works great.

@washbnb thanks for the detailed reply!

I have a Toto smart toilet (in my bathroom) and think highly of their products. I keep an eye out for a sale and then at that time probably order one.

You’re welcome @HH_AZ. I went with the C100 model. Liked that it had an attached control panel instead of a remote. Got the open box deal from Amazon for about $215!

instead of a remote

Sounds like a wise choice! How far does one typically stray from the toilet while using the toilet to warrant a remote?

Not necessarily. The choices are
A) to have it attached (which places the functions on the side of the seat)
B) to have it on the wall adjacent to the seat

I prefer B because it’s easier to select which function. 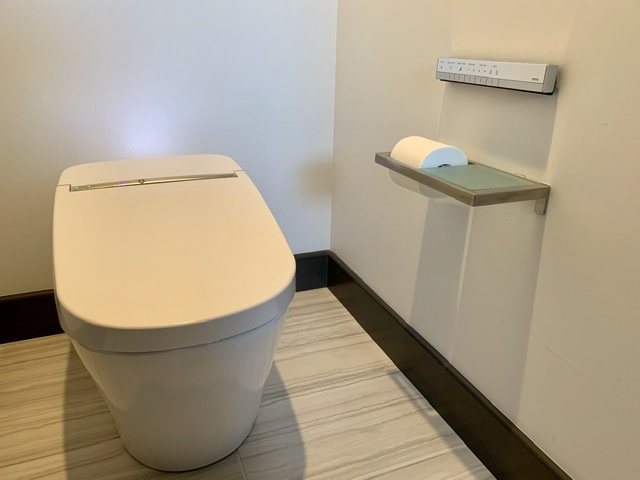 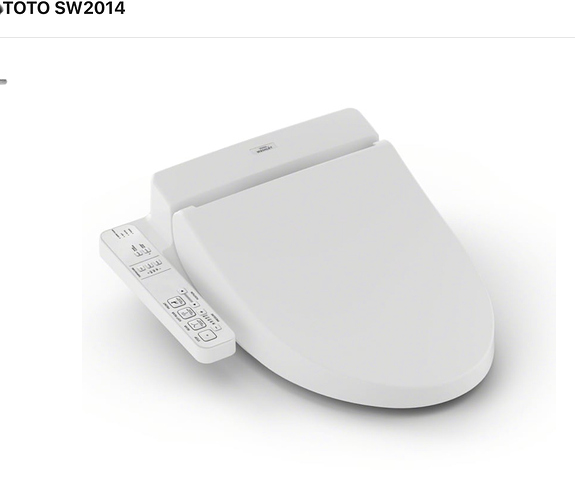 B) to have it on the wall adjacent to the seat

I can see that. I agree!

However, I had fun picturing more of a tv remote and how I could flush it repeatedly on someone from the other room. I don’t know why I think this way

I did too! Having a teenage daughter, I was cracking up picturing the fun I could have with that remote.

Important question, CAN it be portable?

Important question, CAN it be portable? 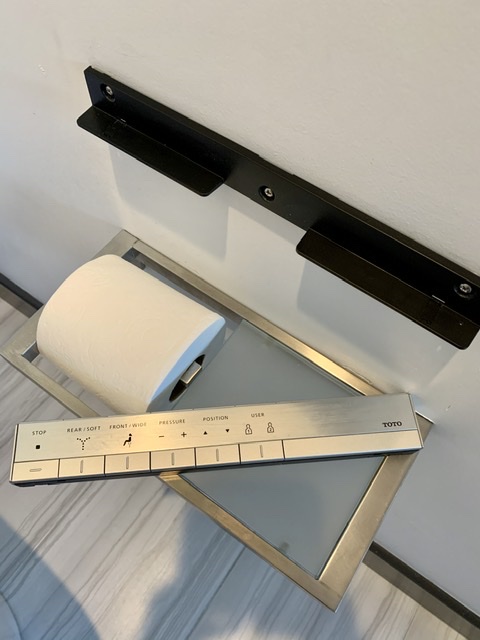 If you have males in the household who usually urinate from a standing position, that remote next to the seat is NOT a good thing.

OTOH I find this whole Japanese toilet thing really ridiculous. All I want is a sanitary and warm place to do my business. If I want a spa I’ll install one.

I also find it absurd. I wouldn’t what to have to refer to an instruction sheet to use the toilet. People seem to just be in love with new technology simply because it’s available. The more things you have in an Airbnb which are not familiar to the majority of your guests, the more issues it will create and the more things you’ll have to repair because guests used it improperly.

What’s next?- the “smart” toilet says “Your stools seem rather loose today- perhaps you should be more careful about eating at those street stalls.” ?

I also find it absurd.

To each his/her own. As I said in my initial post its not really for every listing. It’s a WOW amenity.

Technology aside, It’s nothing more than a modern bidet, that doesn’t require the extra space or relocation dance (that a bidet requires). For those of us who like the sanitary aspects and reduction in use of TP, it makes sense.

I had a former neighbor in her mid 70’s who came back from a trip (throughout Asia) and said how inferior US toilets now seemed.

It’s not that I think there’s anything absurd about bidets. People from countries where they are common think dragging toilet paper over your bum and pulling your pants back up is gross and unsanitary and it pretty much is. But something that requires pushing buttons and has all sorts of options doesn’t seem like a WOW factor in an Airbnb where such things are not common- they seem like something that would be confusing and weird to many guests.