I wondered what others would do in this situation?
I have a guest staying who is a good guest for the most part, however the cleaner sent me a couple of photos showing that he has been using the nice hand towel I’ve supplied as a cleaning cloth. It’s part of a set and so he will be aware. The towel is ruined. No biggie it’s probably around £15 and he initially booked a month, recently extending in to December for ten days, when the rates are higher. So I can suck up the cost. Problem is I don’t want him doing it again. Cleaner put rubbish towels in when she changed the rooms over (just the old ones we have, that usually are just for myself and my daughter), so that I don’t lose more towels like this. I also had her put in a bunch of old tea towels. In the past I’d have spoken to the guest too, just to say cleaner mentioned you may need some tea towels for your food, I’ve supplied, pls use these and not the towels. But I’d be interested to know what others think.
Also, although I don’t forbid eating in rooms, I’d quite like him to get rid/ rinse his takeaway boxes to avoid lingering smells. The cleaner showed me that his drawer is full of them. I could let it go… but would prefer… what do you think? 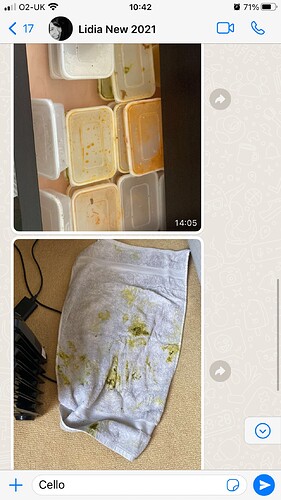 I think you’re giving you guest too much credit: “It’s part of a set and so he will be aware.”

I would certainly confront the guest about his mis-use of the towel. although it looks to me that the one will wash up OK. That looks more like a tea towel than a bathroom hand towel (what we Americans call a ‘wash cloth’). It appears he used the towel to clean up a food spill (that’s what I would do, too).

Why not supply the room with paper towels or at least serviettes?
Better still PUT a sign in the room, or at least in your listing rules which says “NO EATING IN ROOM”. Otherwise other guests will spill things and stack up takeaway boxes as well.

Depending on what it is, I suspect that towel would clean okay. It might need a few sessions soaking but I promise, I’ve had far worse. (Often thanks not to guests but my other half.

The takeout container thing is a bit gross though. Does he have an adequate bin, plenty of bin liners and know where the outside dustbins are?

I would definitely mention it to him. After all, blokes will be blokes - they need telling often. By the way, presumably the cleaner removed them and threw them away, so he knows that you’re aware of the situation.

He didn’t know what to do with them so you’ll be a gracious and helpful host by supplying bin liners etc.

As @KenH suggests do you leave paper towels for guests? True, they’re not exactly environmentally friendly but if a guest has nothing else, you can imagine that he might use a towel.

Hand him a bunch of cleaning towels and tell him to use those to clean things up, not the bathroom or tea towels. And ask him why he’s stashing dirty take-out containers in a drawer- that’s really weird- and tell him they need to go in the kitchen garbage or you’ll have a house full of rats.

You’re a homeshare host, right? When guests are doing things that aren’t okay, just tell them how you want things done, it’s no big deal and isn’t something to agonize over.

although it looks to me that the one will wash up OK. That looks more like a tea towel than a bathroom hand towel (what we Americans call a ‘wash cloth’).

uh no, if that’s curry, and there’s turmeric in it, good luck getting the stains out, maybe, with a good soak and possibly a bleach. and that’s a hand towel, not a tea towel. 100% clear.

maybe the guy thinks he should recycle those containers and doesn’t know how?
maybe he’s a slob.
either way he needs a nudge to be reminded that food in the bedroom isn’t good (where else did he spill? and where next time? on the duvet? that’ll be a problem) and he needs to dispose of rubbish asap to avoid unwanted house vermin.

. That looks more like a tea towel than a bathroom hand towel (what we Americans call a ‘wash cloth’).

Huh? I don’t consider or call a bathroom hand towel a washcloth. A washcloth is smaller than a hand towel, about half the size, and usually square, not rectangular. A hand towel is about the same size as a tea towel, but fluffier. I supply both hand towels and washcloths to guests (and of course bath towels).

A washcloth is smaller than a hand towel, about half the size, and usually square, not rectangular.

and is called “facecloth” here (sorry it’s not a cuter name for you S!) you’d think we might call it a “washie” but sadly we do not.

Haha maybe you are right and five thick fluffy towels in the same colur rolled up on his bed on arrival did not sink in. I can see how in the pic it may look a bit like a tea towel, especially in that state, perhaps because of its colour in part which is very light grey (gray as you guys would say!), but it is a Sanderson 700g towel and way too thick and fluffy, I think, to give that appearance in the flesh. None the less I agree with what you say, and others have said, that in the absense of towels designated for cleaning up, it is understandable that a guest might just grab any kind of towel. So my task for today is to buy small kitchen type bins, kitchen towels, cloths etc for each of the rooms.

I don’t like signs, and I do allow guests to eat in their rooms, so the sign won’t work for me, but thank you for your feedback it has been very helpful.

ps Gillian is right this won’t wash off unfortunataely.

Thanks for clarification I got confused there for a minute! Yes, same here, wash cloths are much smaller, and square, as you say.

I supply two wash cloths/ face towels, a hand towel, a bath towel (for hair, never understood why there is no such thing as a hair towel!), and a bath sheet.

Yes exactly good points. I am just trying to figure out how to equip bedrooms with small kitchen type bins without them looking ugly.

I try not to agonise over this stuff, but I know to ask when unsure. After it was pointed out to me that I should never have spoken to the guest regarding the fake tan (btw I totally agree!) on the sheets, (‘she’s on holiday!’) it made me wonder how fellow hosts would approach other scenerios!

my task for today is to buy small kitchen type bins, kitchen towels, cloths etc for each of the rooms.

I don’t like signs, and I do allow guests to eat in their rooms, so the sign won’t work for me, but thank you for your feedback it has been very helpful.

ps Gillian is right this won’t wash off unfortunataely.

3 things:
yes i love being right, ha, even if it’s sad. we buy really nice towels for our listings, and sometimes he matching hand towel, but i also can get handtowels so cheap i often don’t bother.

I also do not like signs, none of us have signs at home, and so it ruins the vibe of “live like local” if you have signs about the house. A guest manual can have all the instructive info. the only “sign” i have is a laminated sheet of coffee pods sitting in the cupboard (and sadly it’s probably out of date now, 6 months later, so pot luck!), oh and i also have cute sign i designed myself ( and no, i’m not some hack with PaintPro 1.0 from 1987) and i printed as a 6x4photo and framed for each bathroom, warning guests that our septic system is not designed for anything that your body didn’t organically make.

and yes, you need to have a roll of paper towel, and 2 tea towels for guests. we leave one on the oven rail, and one in the cupboard.

If you are catering to families and you aren’t a family person, or you are a single male, you really need to get some more help on what is “acceptable”, and by that I mean: get an experienced mom opinion.

I am just trying to figure out how to equip bedrooms with small kitchen type bins without them looking ugly.

we battled with this and opted to not have bins in the bedrooms.I don’t have a bin in my bedroom at home, there’s one the bathroom, and one in the ktichen.

I didn’t have a bin in the guest bedroom, either (never had one in my bedroom). They have one in the ensuite bathroom, I figured that was enough. Then a friend of mine who’s been hosting for years came to stay and told me that was the only thing missing from the bedroom.

I just happened to have a nice small bin-size basket around I wasn’t using, so I put it in there. But I still don’t think it’s necessary. Just one more thing to move around and clean

there’s turmeric in it, good luck getting the stains out,

There’s other options for turmeric. Try OxiClean, or vinegar mixed with dishwashing detergent. One of those worked for me but I can’t remember which one

pardon my French but the guest is a p.i.g.
I would not host him again. The towel will need to be infused in chlorine. Luckily it’s white.
I’d also put a “no eating in the room sign.”

i’d def try dawn(fairy), that’s my #1 cleaner for anything.

Speaking of washcloths, how does everyone feel about used ones?

My guests find odd places to hang wet ones in the bathroom (towel rack, side of the tub) and I try daily to take the used ones out - damp and ready to attract germs and make the room smell damp.

Does anyone put a ‘used washcloths’ bin in their bathroom? Any ideas on this?

He’s a pig! At this point, you have done all you can do. Wait until he checks out and ding him for cleanliness on his review.

Seriously what goes through someones head to do this?

Do they think that you just throw towels in the trash and buy new ones with each stay?

and this is why you do not tell guests ‘treat our home like your own’. That person’s home must be quite a … mess