For those of you who experience July/August as the most challenging months… share your thoughts! What were the daftest things guests said or did this year??

It’s actually not been that bad for me this year but omg, I am so looking forward to a break. I’ve just had to redirect a drunk 79 year old who has been here for 4 nights but somehow mistook my room for the bathroom tonight.

Given what we’ve just made for July and August I’d be happy for the “silly season” to carry right on until December.

We don’t have a season as such so I have to deal with nutters all year round.

I should correct that really because we don’t have bad guests at all. But we do have weird ones who think they’re perfectly normal. (Or is it me who is weird and think I’m normal?)

We have a tourist season but our lovely local CVB attracts guests all year round with conferences, exhibitions and special events.

That’s true…people on business are less likely to be " weird" .
I just saw an ad on Craigslist : please if you are weird don’t inquire . Hehehe…can anyone possibly say about themselves " I am weird " ??

can anyone possibly say about themselves " I am weird "

So true! Weird is relative anyway. What I find weird, you might find normal! For someone to say “I’m weird” is like someone saying “ooh I’m mad, me!!” No. They’re guaranteed to be the dullest, most irritating people you’ve ever met.

Given what we’ve just made for July and August I’d be happy for the “silly season” to carry right on until December.

Yes, I can get that. But I REALLY don’t want a dead body on my hands. And I guarantee that would happen if I don’t have a break!!

We lucked out this summer and have some wonderful long-term guest staying until January.

Last summer however, when a nice family of 6 moved out…
We found one bedroom window boarded up from the inside with a metal floor transition strip and random wood pieces. When cleaning up that bedroom, we found drugs up on the closet shelf. A few weeks later, we got some mail for them from juvenile court.

@atHomeinCary Was that through Airbnb?

Another year of no good stories here. But in general it doesn’t seem like we get as many good stories. I guess we’ve run off the good story tellers because we are so hostile?

July was rocking. Got through the mouse invasion without mouse-to-guest contact. August was rocking along. Got my first slobs in. My cleaner was very unhappy: Gave first negative review. Based on what I know of the area, it should stay busy through fall and early winter and be dead after deer season closes until spring break. I don’t know which season is Silly Season, I try to make that a year-long occasion, personally. I hope Slob Season is wrapped up, though.

Edited to add: I didn’t feel the least bit bad about giving a negative review. What I feel bad about is my cleaner having to clean up after pigs. She’s family and she takes a lot of pride in what she does because she wants us to be successful. She sent a series of pictures and choice words. When I told her they would be barred from booking ever again I got “THANK YOU!!!” with praying hands. I feel bad that she has to work harder because people sometimes really suck.

One of my biggest fears… I have a cabin in the woods, mice happen, I have read that Air will shut a listing down and make you prove that you paid for extermination if a guest reports a mouse.

We had the exterminator put in 4 bait stations around the ingress points. They check them monthly when they go out and they said there has been nothing. We had exclusion service done around the crawlspace, also, for good measure.

The issue was a brush pile that my neighbors had let build for many years. They torched it while I had guests in, smoking out the entire house and laying a layer of ash all over everything including the guest’s brand new black pickup truck. You know Texan and their pickup trucks, this was a crime. I politely informed the guest where the car wash is and apologized. The mice showed up because of that.

I recommend these, though. You see them at the entrances to Lowe’s or WalMart (big stores with automatic sliding doors that stay open a lot). We only have to pay $5 extra for this service on top of the pest control contract, the boxes belong to the exterminators but you can certainly buy and bait them yourself if you’re not remote like us. 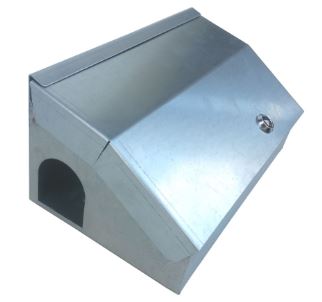 The daftest thing a guest has said…well actually I’ve had two different guests say the same thing, “I thought I was checking out tomorrow!” Twice people have thought they were booked an extra night. The last one was one of our long term tenant’s mother. She acknowledged my message about check-out, etc the night before, but our cleaner was surprised to find her and all her stuff still in the unit at about noon, a full hour after check-out.

I had a group of five young adults leave this morning. They were in town for their friends’ wedding yesterday, and came back after the reception (and more partying in the local bars) around 1am. They proceeded to sit out and talk on the front steps, which repeatedly triggered the Ring doorbell…which recorded one of the guys peeing in the bushes.

Also this week, I had two different inquiries looking to negotiate a lower price. That’s the first time anyone has ever asked for a discount. One of them decided to book anyway (after I gave her the “excellent value for the cost…” speech), then immediately asked me if I knew how much an Uber from Portsmouth, NH to Portland, ME would be.

I’m definitely looking forward to getting my winter tenants in…

Not had anything major to note this year other than one couple who turned up a day early & I was fully booked. Called around the hotels & B&Bs in the village for them and the cheapest room I could find was nearly twice what I charge …so have made a mental note to up my prices next year.

I have noticed that while there have been no real issues, generally guests have been more ‘needy’ this year in general though, something that other folk have also commented on in my village.

which recorded one of the guys peeing in the bushes.

I have two game cameras on two oak trees, in plain sight and disclosed in the listing verbiage, but most notably, IN PLAIN SIGHT. Both of them have captured images of male guests using the trees as toilets. Meh, good for me for providing a place that makes people feel so profoundly relaxed.

This is my 4th season of hosting 2 separate bedroom/private bath suites in my owner occupied home, and it’s been the most challenging season so far. The theme this year from guests seems to be they act like they are staying with close family, rather than a complete stranger.

Several times, guests have helped themselves to food that wasn’t theirs, or have really “over used” food meant for them. One couple went through a six pack of Alagash White (a relatively expensive beer). My husband accused me, LOL!

Another set, every day for 4 days, pocketed the 4 individual JIF peanut butter cups I leave for breakfast. That’s $8 worth of peanut butter! Yes, I know, silly me for providing more every day.

One set found the bottled water stash in the pantry and helped themselves to a couple bottles every day on their way out. They also decided some apple juice might be nice and took bottles of that too.

There were the 2 young Canadian girls who, despite being told repeatedly to not let our two cats into their room, continued to do so. They also FED our cats without asking, or telling us. And then, they complained that a cat peed on their clothes on the floor (from being trapped in the room all night), which meant they had to do laundry, which they also just did, without asking or telling, or anything, which is also an amenity I no longer offer. Said girls also cooked full meals in my kitchen twice, which is not an amenity I offer.

Right after these two checked out, Mr & Mrs Perfection checked in. While one of the cats was in the guest room with the Canadian girls, along with the poor thing having to relieve herself, she also coughed up a hairball, under the bed, which my cleaner didn’t notice. Mr & Mrs Perfection sure as hell noticed, and thought it was poop.

Mr Perfection came down 10 minutes after checking in (I mean 10 minutes after his thorough inspection of the entire space) and asked me for masking tape. He told me there was a cracked tile in the bathroom, which was a BIG liability and SOMEONE could cut their foot! I was horrified, and asked him how that had happened? He looked at me like I was crazy and said it was there when he arrived. I couldn’t figure it out, as I was imagining a huge, noticeable, new crack that had not been there an hour before. Finally, I figured out that he was talking about a half inch long hairline crack on the corner of a tile that’s been there for a decade. Yes, there is a crack, but the edges are flush with each other and it’s tiny. No one is going to cut their foot on it unless they go way out of their way to do so. Here’s a picture:

This year, people can’t park their cars in the right spot, despite explicit and clear instructions. I have things worked out so with 4 cars in the driveway, if people park as I ask them to, everyone can come and go as they please. Except that this year, its suddenly become a problem because people won’t park where they need to and I’m constantly having to ask someone to move their car. As well, twice, guests have shown up with 2 cars, just expecting I will have room for them.

I don’t know, this season has just been different. People acting like they live here. Not isolated incidents of people cooking meals, doing laundry, going through my kitchen and taking food, using anything they find and so on.

Meh, good for me for providing a place that makes people feel so profoundly relaxed.

We’ve had the men peeing in public posts here before. I seems like men don’t have to be “so profoundly relaxed” to pee outside. I was also surprised that the approval rate for men peeing outside is high. I disapprove for reasons of smell and hygiene but given their propensity to miss the toilet I kind of wish more of my male guests would pee outside.

I was also surprised that the approval rate for men peeing outside is high.

I was actually somewhat amused watching the video. It didn’t actually capture the guy peeing, just the reaction of the woman who was sitting on a planter: “Adam? Are you peeing in the bushes?“ Adam’s sheepish reply: “Yes, I am.“

What was more disturbing was seeing one of the guys pick up my co-host’s (outdoor) cat and start to carry it in to the apartment…fortunately, he thought the better of it just before I went to turn on my audio.