I know there has been a lot of of pillow talk on here before, but I think I may have a situation that has not yet been addressed. Four of my five listed rooms either have double or kingsize beds, but are for single occupancy only. Two pillows per bed does not look great, but the alternative is four pillows per person?! That’s alot of cases to wash in between guests …eight in total, including the protectors! Factoring in that I have a minimum of only two nights, I’m not sure my tumble dryer would have any time for anything else, plus there’s the enviroment. And most of all just four pillows for one person seems excessive. A really great looking bed is important to me (and my guests I think) though. What would you do?

Four is lovely for one person, especially if they read in bed. And four pillows look so luxurious.

I don’t wash the protectors after every guest (unless the pillowcases are noticeably marked with drool or worse) so after every other guest works for me.

As for the environment, I try to line dry as much as I can. I agree that a great-looking bed is very important though.

If you don’t want to do four pillows, how about three standard pillows? 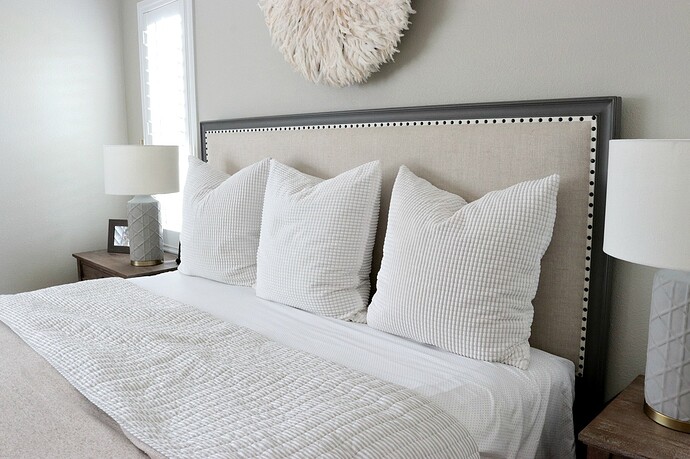 I think that 2 pillows, as long as they are large enough to fill the width of the bed, is adequate, but you might want to have one or two more available in the closet in case, as Jaquo points out, it makes them more comfortable when reading in bed, etc. Some guests may never use the pillows in the closet (let them know to leave any pillows they’ve used on the bed, not return them to the closet), which would cut down on having to wash all the pillow slips every time.

What I do think is important, though, is providing a selection of different types of pillows- some people like puffy ones, some prefer more flat. I only have a single bed in my guest room- they have a thicker feather pillow and a thinner synthetic-fill one, as well as a comfy feather throw pillow with a washable cover.

I do wonder though, why you put a king-size bed in a room for single occupancy, although I’m sure guests wouldn’t have any complaints about that. Seems like a lot of space in the washer to wash king- size sheets and other bedding for a solo guest- much more onerous than an extra few pillow slips.

This looks good but aren’t these cushions?

Yes, I think they’re the 26” square “Euro” pillows sold in the US as bed dressing, not pillows for sleeping.

They don’t look like bed pillows to me, either, but maybe the photo was just to show how 3 pillows could look like enough.

Yes, they’re cushions but you can achieve the same look with three standard pillows.

Thanks for your input everyone.

I I asked people’s opinions on here before re single versus double beds, and on that feedback I decided to stick with all doubles in the rooms that can accommodate that. There are enough people IMO that wouldn’t book a single for more than a few nights if they don’t have to, to warrant that.

The reasons I have kings is just because I already had those prior to using them on Air.

I must say you’re right about the extra linen though. I’m particularly sick of wrestling with kingsize duvet covers (I’m not sure If you don’t normally use these in the States?). To address this I’ve just ordered double duvets for my kingsize beds. I’m hoping if I cover with a kantha. The lack of the overhang won’t matter

Unless you are particularly attached to the king-size beds, maybe you could sell them and replace with doubles or even queens for larger or tall people and charge a bit more for those rooms, which would offset the extra laundry.

Of course, I don’t know where you are located, so don’t know the dimensions of your beds- they can vary significantly in different areas of the world.

I agree that a double is preferable to a single, even for one person. My guest room has a single only because it’s a small room and a double wouldn’t comfortably fit and still leave space to move around easily. But no guest has complained about the bed size, even tall or heavy guests.

But what would the purpose be of swapping the kings to doubles?

Less laundry. Isn’t that your main issue here? You said in your first post that washing a lot more pillow cases was a concern.

But it seems to make more sense to bill the king size bed rooms as your “deluxe” rooms and charge more for them, which would make the extra laundry more palable.

duvet covers (I’m not sure If you don’t normally use these in the States?)

They generally don’t use duvets. But this diehard English person in Florida uses them in the apartments because it’s so much easier.

cover with a kantha

Ah I see sorry. The main issue was pillows, wondered if four was unnecessarily excessive for one person, bearing in mind each change of pillows would need to be multiplied by eight, and that one person doesn’t exactly need four pillows, and it’s almost purely an ascetic thing. I’m happy with the mattress size though, a double would only be 10 by 15cm smaller, and there’s only one of them.

You can also do three standard pillows; one left & right and then one in the middle. 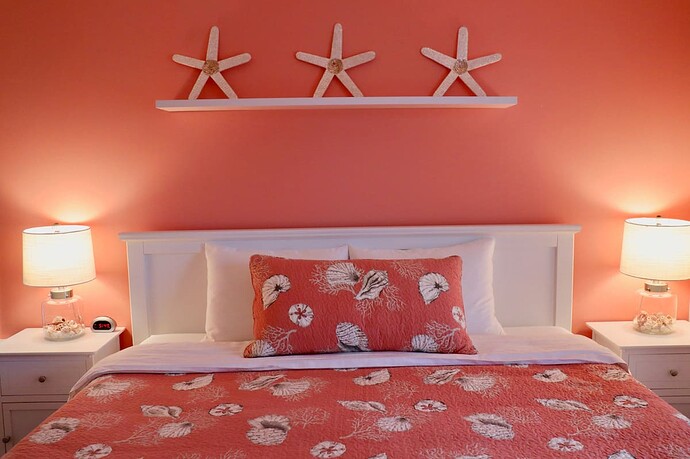 I don’t see how you can get around this. 2 pillows will look meagre on the bed. You need 4. Even 4 pillows on a king sized bed looks meagre imho, and so we add throw cushions too.

You can also do three standard pillows; one left & right and then one in the middle.

you could do this, but it’s only 1 less pillow and in that example the front pillow is a king pillow? and it’s matching the quilt, which adds another layer of organisation. Standard white pillows are easy, but the front one or two pillows usually have a decorative case, which means sourcing extra cases to match your doona/quilt.

We try to find fancy white pillowcases that can serve as the front pillowcasess, but will match all the various doona covers that we have.

I love this idea! Thank you! They are all the same size? Just to confirm as the middle one looks bigger to me

The picture was just to illustrate the position of three pillows. It doesn’t have to be a pillow sham, it can be a pillow in a pillow case.

The middle is a king size but you can use a standard size.

We have two double beds. Inside, for one couple, I usually put 4 pillows stacked under the duvet. If there are two couples, I put two on each bed, and 2 extra in the little trailer. If its a single guest, they get the 4 pillows. I have down pillows that are standard size, but they are quite tall. My pillow cases are ironed and the duvets are line dried and not ironed. Our ironed pillow protectors are washed every 2 guests.

If you have plenty of sets per bed the amount of wash seems less as it won’t ever be rushed. And, beds all the same size is nice. I’m curious why do you not want couples?

Those photos are deceiving, they do not look like double beds.