Deeply scratched TV all over monitor

After the guest left, who had children and unauthorized adults and more children in our home, per my security camera, left our living room TV deeply scratched all over. Would you charge for this? I decided to not even charge for unauthorized guest, but just to pay me for a new TV.
Guest denies it, requests before pictures, and is full of insults about our home, location and us, after we maid the claim, all recorded on messages. I escalated it!

TV deeply scratched all over.

Honestly, I would too.

I’m sorry this happened to you but obviously one needs some evidence other than the mere presence of children. OTOH, if I were a guest and I went to a rental with a deeply scratched TV or anything else that looked damaged, I would document it with Airbnb right away.

If Airbnb does pay you anything realize it will be the actual value of the TV now, not the replacement cost. If it’s an 8 year old TV it’s not worth the $1000 you paid. An equivalent new one now only cost $400.

I had a similar issue. One guest broke our glass patio table. I was going to submit a claim with Airbnb and then decided to just write it off instead of dealing with the headache, not only with guest but also with the resolution center. It’s upsetting that guests can destroy personal property and not even feel bad about it. It seems like they all have a entitlement issue. All we can do is hope it doesn’t happen again. Hang in there.

Charge them. Let us know the outcome. It is notoriously difficult to get Airbnb to pay for serious damages like that according to other people on this forum.

Keep us posted on the outcome of your case.

I just had the previous guest before this problem guest graciously confirm, there weren’t any scratches on our TV, so i have my proof , the TV wasn’t damaged when problem guest checked in.
The guest is blatantly lying, then trying to discredit me trough messages for my listing, home and location. Typical behavior of this type of guest.

before this problem guest graciously confirm, there weren’t any scratches on our TV,

Good thinking. Have you started the process with Airbnb yet?

Yes, guest denied paying so i escalated it. The tv was on a TV stand on the floor, maybe if it was on the wall, kids couldn’t have reached it? But who am i kidding, while i try hard, i’m never going to airbnb proof our home ever, its impossible, stuff happens, and good people own up to it.

Yes, guest denied paying so i escalated it.

Ah, yes, you said that already. My apologies.

I guess this is an advantage of checking guests in personally. Maybe it’s harder to lie about it when they know you know that they know it wasn’t scratched when you checked them in. But as we know too well, people will lie about anything. They will have their hand in the cookie jar and when you confront them they will say “what cookie jar?” “What hand? I don’t have a hand!” LOL.

No, not a cat. I found a sharp granit gravel piece, on the floor next to the tv, i,m suspecting is the culprit. 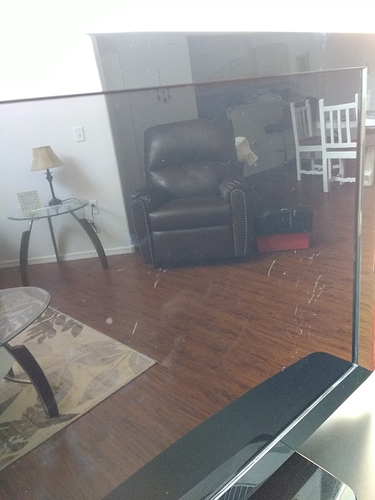 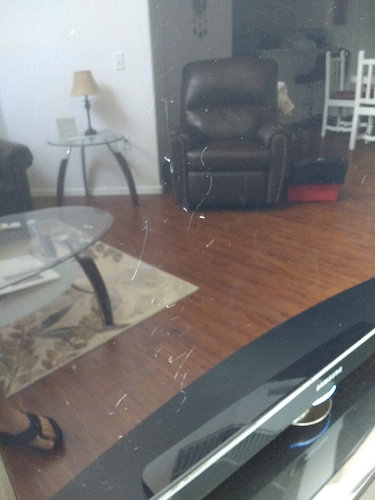 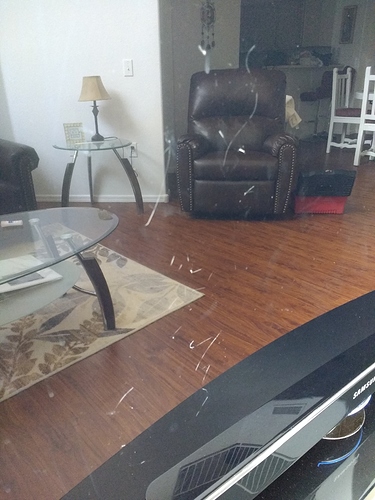 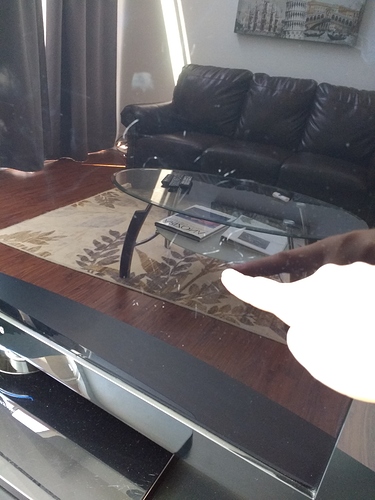 I made a video also, proving how deep the scratches go, that must have been caused by a very sharp object, by pulling my nails over them and they catching badly.

That’s awful Browneyed. So sorry you are having to deal with this. I’m lucky in that we have never had any major damage (yet!) and I’m dreading the day we do. Hope you are successful with your claim

OMG! The nerve of them. That’s terrible. Surely Airbnb will give you something.

One of them was about 3-4 year old i,m guessing from security camera footage, with a bottle, sippy cup the rest of the tree kids were older around 10-12. I don’t know, as she didn’t provide ages, especially on those who she snuck in.

I would put those photos on twitter. Along with the information that the previous guest guaranteed they weren’t there beforehand.

I opened a claim today, waiting for the " case manager".
Hopefully they won’t force me to make this public.
I have a $500 security deposit. See how they will manage it.

I would charge them for the extra guests as well.
In my day kids used to do bark rubbings. Now TV scratching is obviously the thing.

I would too especially since a lot of kids are really destructive. And the parents are often really entitled just like these people and don’t want to pay for the damage their little monsters do.

I let that go (charging for undisclosed guest, though i could enforce it, i have it in my house rules penalty for undisclosed guest of $50/person/day and i have camera footage). I let the site know though, so they see who they are dealing with. I let a lot of stuff go, unless the damage is so extensive their booking doesn’t pay for it.

. i made a video of it, as it was so obvious as soon i walked in into the home.

Could you contact the guests before and get them to verify via ABB message it was not damaged during their stay andnptovide this as evidence to ABB? I think this would be good evidence