I’ve been buying these on Amazon, which comes out to about $0.27 each, but wondering if anyone knows of a better source to buy them cheaper in bulk. 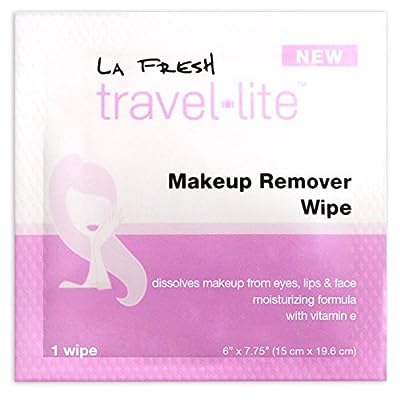 REMOVES HEAVY MAKEUP Put skincare at the front of your health regimen. With each removal, La Fresh Travel Lite wipes can fully dissolve cosmetics, impurities, and dirt, leaving your skin refreshed and ...

Individually sealed, elegantly packaged, and designed for the lodging and hospitality industry, Spa Scents Makeup Remover Wipes will save you money on

I use a re-usable, washable microfibre cloth designed specifically for removing makeup with just water. They cost about 9.99 for 2 and can just be chucked in the wash as necessary. I haven’t used anything else since I swapped to these…

For personal use washable cloths sound fine for makeup removal. I’ve never worn makeup, but I assume that when people are away from home they want to use something disposable for wiping their face, particularly their eyes. I would be worried that if the host had not washed the cloths in hot water that I might get pink eye.

The trouble with disposable wipes is so many people have sensitive skin. This tends to be why people have loyalty to the brands they know. These people will travel with their own bottle of cleanser and are most likely to be the ones staining your wash cloths! So maybe if you’re going down the disposable route buy a few different brands and stick to those aimed at sensitive skin.

Do baby wipes work? They are made for sensitive skin. If they work for makeup removal there would be no need to buy multiple brands. Those of you who wear makeup: are makeup wipes an amenity you believe hosts are responsible for providing? From my view as it appears that brand loyalty is a factor and they don’t take much room in luggage and don’t weigh much makeup wearers should bring their own.

Probably…I’m not sure to be honest. They could well be the same product just marketed differently. I bet people wouldn’t use them though as perception is everything when it comes to brands/products. Just look at the way people stick to premium grocery brands when the cheap ‘no frills’ options are often exactly the same. It has a lot to do with packaging.
Personally I travel with all my own toiletries, the only thing I’d use is probably soap and shower gel. I do think it should be up to the guest to bring their own, but then it all comes back to them ruining washcloths! I think that’s one problem that won’t ever go away

Just edited to add: if there was a disposable microfibre facecloth provided, I would definitely use it. They are so much nicer on the skin than washcloths. Surely they must be available in bulk somewhere? Even better if they were in a little labelled package to make it clear exactly what they’re for, and so it’s clear to the guest it’s brand new and hasn’t been used before

Baby wipes and makeup remover are not at all interchangeable. Baby wipes have moisturizers and very often anti-bacterial agents and diaper rash “preventers.” Not at all appropriate for someone’s face.

I have neutrogena and Kirkland wipes available (both bought at Costco) along with some Costco white washcloths for use by people who bring their own remover. For whatever reason, I have not attracted many folks who use much makeup. Boston is not a makeup kind-of town, so maybe people feel comfortable being out and about without too much? Have no idea. I don’t wear the stuff myself, so I haven’t tested either product that is in the room. I can say, the Neutrogena is used more often which isn’t surprising. People love name brands.

Thanks very much for letting me know that baby wipes won’t work for makeup removal. Thankfully, we’ve only had one guest who ruined linens with makeup. It was a bright yellow face mask and moisturizer with self tan in it. In both cases it was towels that were stained. We also don’t get many makeup wearers.

We’ve checked and it isn’t cost effective for us to join Costco.

The dollar tree will deliver to a store near you at no charge:

I bought toothbrush kits through them and they are really good. Of course, since then no one has lost their luggage or forgotten their toothbrush.

Thank you very much. I’ve never shopped at Dollar Tree as 99 Cents Only stores are much closer to us. I plan to start shopping at Dollar Tree. Those are good prices on makeup remover wipes. Currently, we have a package that a Japanese guest left. As the writing on the package is in Japanese we put a label on it in English.

I give up. It seems like the more I try to do to alleviate the problem, the more makeup I find on every towel. I just do not understand people. And I refuse to try any more. It’s pointless to bother.

Now I just stock up on oxyclean instead.

I’ve just given up the makeup battle

Me too. We use white towels and facecloths that can be bleached. So there’s never really been a problem.

I’m cautious about wipes though in case they are flushed down the loo. Our local plumbing can only accept ‘natural bodily stuff’ and toilet paper.

On another thread, I was confessing how I used the hotel white towels to remove makeup. I don’t like makeup remover towelettes and won’t use them except for camping.

I did mention that no matter how much make up I take off, I always rinse the edge of the towel with hot water and some soap and it all comes right out. Not a trace is left in the white towel.

Anyone who doesn’t try to do that is lazy and disrespectful.

Towels stained and ruined with make up will be charged to the guest.

I think it depends on the brand of make-up. Sometimes the mascara comes out, but recently I washed the towels twice, treated, with bleach, and they are still ruined. I cut the towel up into pieces with the idea that I would sew a quick hem around the pieces and leave them for make-up, with a sign. I do put out make-up remover wipes that I pick up at Marshall’s (looks like a nice brand, but cheap). They aren’t used frequently enough to make it worth price-shopping.

It’s rare that a towel is actually ruined -

Half of the people on this forum are saying that white towels are great because they can be bleached and the other half are saying that you shouldn’t use bleach on them because it will damage them. I’m so confused!

How is a washable cloth different from a face cloth though? If a host already provides face clothes I’d recommend they get the microfibre cloth makeup removers.

I don’t provide anything in my place and it hasn’t been an issue yet … and all my sheets and towels are white. I think maybe because at my price point and with my unique listing I mostly appeal to young ones and they don’t seem to travel with loads of makeup. Self tan is another story though and that has ruined a white bath robe.