My heart breaks for those in Fl who lost so much to H.Ian.

Yesterday my rentals took a beating from H.Ian but my LTR tenants are tired but safe & dry. My STR & LTRs are not damaged. (I’m so grateful).

I took a beating in a Facebook group for saying regardless of Airbnb policy, I refund for hurricanes. I do not want anyone to go through the usual power outages & road flooding I know will come even with a tropical storm. Plus I always end up with a great rental booking after.

A shocking number of people don’t realize from North Myrtle Beach south almost to Georgetown is an island. Authorities Can & will shut off water & power during the height of the storm if they deem landfall is destructive enough (I don’t know the actual parameters)

Two friends who are hosts ended up with flooded homes. One tried to warn guests his area was prone to flooding, they stayed, and now their cars may not be drivable. Another has an oceanfront rental, guests stayed, waist deep water in parking, sand swept into pools & indoor pool glass front shattered, 17th floor condo, 24 hrs later no power/no elevators. The kicker is if the hosts had cancelled for guest safety, they would’ve been penalized!

Here’s an article that while it has some bias, does a pretty good job explaining things. I hope at the end of the day Airbnb forces guests to opt into travel insurance. I posted screen shots because everyone may not have access to this article. 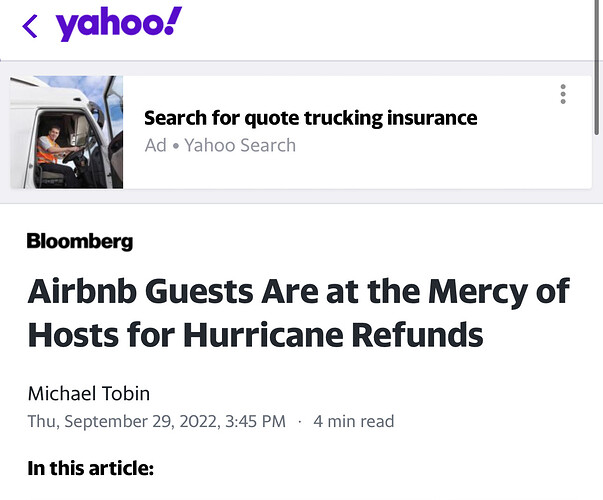 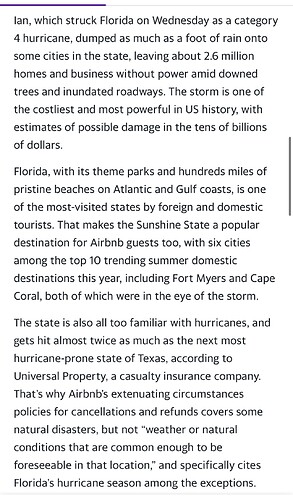 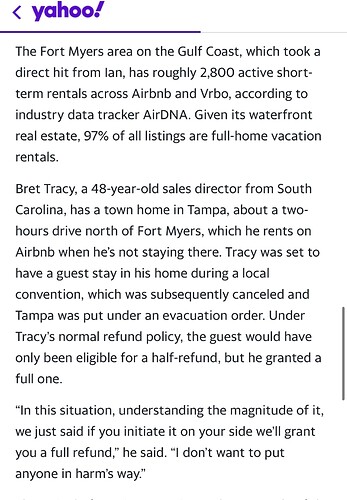 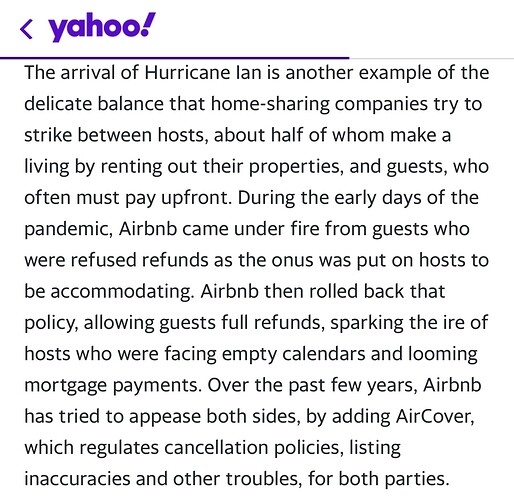 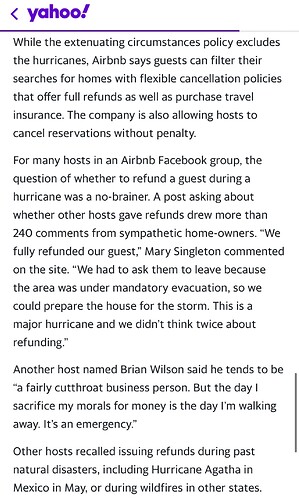 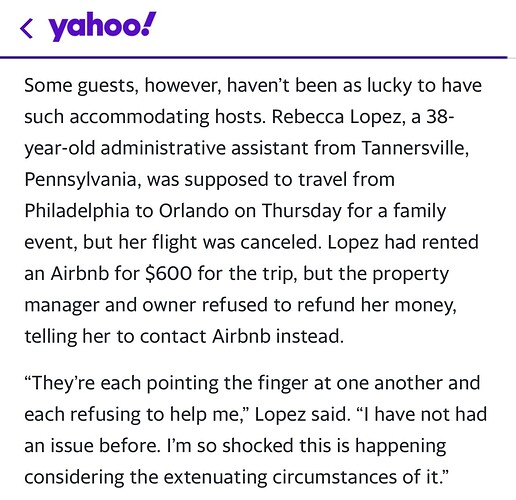 I refund for hurricanes.

So do I. I refund for anything that I’d expect to get a refund for myself.

I’ve no problem with companies charging ad admin fees or whatever they want to call it but I’d be the first to be very annoyed indeed if I didn’t get a refund for adverse weather conditions or anything that’s beyond control.

Funny though how journalists can turn just about anything into an Airbnb story. I can imagine a morning meeting where the editor says to his staff ‘right, I want an Airbnb article from you lot every day’.

By the way, has anyone heard from @KenH in Fort Myers?

I took a beating in a Facebook group for saying regardless of Airbnb policy, I refund for hurricanes.

I just can’t fathom this attitude. It’s an “It’s just business” attitude taken beyond the bounds of human decency, IMO. We saw the same thing at the beginning and height of Covid.

It’s all well and good to say the guests should have had travel insurance, but the reality is that basic travel insurance doesn’t cover pandemics or most “acts of God”. And a couple who wants to get away for a few days isn’t likely to purchase more expensive insurance that covers everything.

I bought travel insurance this summer when I went to Canada, not to cover airline cancelled flights, as the airline has to reimburse for that, nor for booked accomodation, as I was staying with family and friends. I got it to cover medical emergencies. Had I opted for all-inclusive insurance, it would have cost as much as my flights did.

Would these “no refunds” hosts who live in hurricane alleys prefer that no guests booked with them at all during hurricane season, just in case? Because if I read a review or a social media post that said the host refused to refund in a case where a guest’s life could be in danger, or where they could easily find themselves trapped at a listing with no way out, or unable to reach the destination due to flooding, road closures, etc, I would never book with a host like that.

I have refunded during bush fires, floods and the Covid pandemic, as I would want to be treated. I am ok with this because I have the financial backing that I can carry long vacancy periods. I feel for the hosts that are up to their necks in real estate debt and went into this thinking it was easy, but you need to have some resilience built in to your business plan, as STR is so unpredictable.

where they could easily find themselves trapped at a listing with no way out,

I mentioned earlier, one of the hosts I know, warned her guests and they stayed. She offered a refund. They stayed. She explained parking lot may flood. They stayed. I feel sorry for them all: 17th floor. No power. No elevator. My poor knees would never make it down.

Most high rises have generators for the elevators but something went wrong.

Well, you can’t force people to do the intelligent thing if they are determined not to. As long as they don’t try to hold her responsible in any way. A host can’t do much more than warn and offer a refund if they want to cancel or leave.

This is an amazing video- the most graphic and terrifying footage I’ve seen from Florida. (I wish there was a timeline on it, though, that would show how quickly this happened) The guy sure had his webcam set up in a good spot. This video should accompany every hurricane and flood evacuation directive everywhere. Could save some lives of people who don’t “get” it. 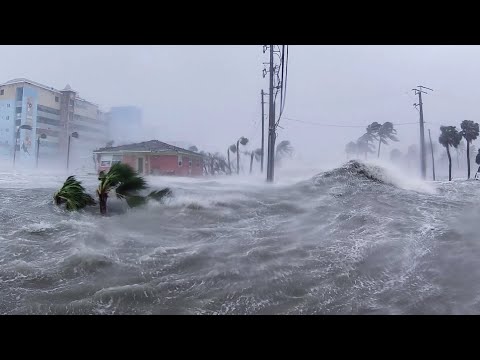 How bizarre your fellow hosts on the group would be against refunds. A real lack of empathy.

It does seem beyond bizarre that some guests are choosing to still travel despite the hurricane warnings.

A terrible time for all those affected by hurricanes and flooding.

It does seem beyond bizarre that some guests are choosing to still travel despite the hurricane warnings.

You would have to understand the mentality of a certain contingent of Americans. The types who don’t like anyone else advising them what to do, view govt. directives with distrust and skepticism, and think of themselves as tough guys who aren’t afraid of anything, or think that “God” will protect them.

Choosing to ignore warnings of an impending disaster and choose to come anyway, is indeed crazy, but there might also be situations where a guest is already in residence and trying to get out and go home would also be risky. But they should certainly not just stay put if there are evacuation orders- there are places set up for people to go to and shelter when these things are predicted to happen and they have no safe way of leaving the area.

The thing about Florida and hurricanes is predicting where they will go and how much damage there will be is not an exact science. All early projections showed Fort Myers would be ok, but those in the Tampa Bay would get hit hard. It turned around awfully fast.

Orlando, which is not even on the coast got lots of flooding. And many folks from either coast evacuate to there because it’s not on a coast.

I’m also in central Florida. And I do refund people who don’t come because of possible hurricanes. However, every time I’ve done that I’ve gotten different people who were evacuating from the coast, so my places were occupied anyway. We happen to live in a planned community with all underground utilities and a ton of golf courses that are really drainage basins. So we haven’t had the flooding or loss of power that many areas of Florida get.

The thing about Florida and hurricanes is predicting where they will go and how much damage there will be is not an exact science.

The same could be said of tornados and forest fires. The thing about Florida is, that it’s only an average of about 120 miles wide, except for the strip along the northern border. And it’s not like there’s a mountain range down the center of it. So a shift in the hurricane as it’s approaching Florida can put it either up the east or the west coast, and it’s not like there are any particularly protected areas inland since it’s mainly flat and at sea level.

Safe in Fort Meyers! Pool cage gone, Carrot wood tree in pool. All else is good. Now that we’ve got cell service. Next steps electricity, water, and internet in any order!

Thanks for letting us know @KenH - I’ve been worried about you.

We lost power and water for ten days after Wilma - but as they say, necessity is the mother of invention.

Great to hear from you.

You comment about the projected course of the hurricane changing is something that Monday morning quarterbacks don’t consider. Hurricane Katrina was once projected to fall east of New Orleans! I do shake my head at people who failed to evacuate after the projection updates and an evacuation zone designation, but none of us know what individual factors drive these decisions.

…and while airbnb owners are quick to help, quick to refund, Republican ‘lawmakers’ are quick to deny recovery funds - all Florida Repubs voted against emergency funds for their state Florida, while their ‘governor’, who as Senator voted to deny Relief for New Orleans and Katrina, asked for Gov’t funds for Florida.

Remember these things when you go to the polls in November -

You got a reliable source of this (i.e. WSJ), besides tabloids like CNN/MSNBC?

The Congressional Record, of course, shows their voting. I’m not sure how the press enters into this. The governor of Florida’s request for help was reported even by that tabloid Fox.

Cool, will look it up, oftentimes is helpful to read why something was voted a certain way.

The Congressional Record, of course, shows their voting.

They voted against the bill because there were “add ons” which they referred to as pork. They knew the bill would pass so they were still within the party line in not voting for it.