Are delayed payments now the norm?

My guests checked in on Wednesday for a 5 day stay. Air didn’t release the payment until last evening (Thursday). Before my COVID pause, I would see my payment around 8pm on check-in day. Air’s message today said the payment had been released and I should see it around July 30, a F%(^^ing week from today!

They’ve already made money on the float interest since these folks paid a month ago! Do they really need another eight effing days of interest? Or have they just become more inept after going public?

However, I did change the check-in time from 3 pm to 4 pm (Alaska time, an hour later than Pacific). I’m just wondering if the later time might be triggering a delay because my check-in time is later than Air’s payment cutoff time.

These folks checked in on the 21st. When did payment 9 days later become the Air standard? Any other US folks having these delays?

My payouts have always (since 2014) initiated after the 24 hour “guest must be happy” period.

If $$$ sent Friday, Saturday or Sunday, posts to my account Monday 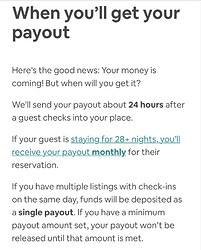 Here en España, it’s “sent” the day after check in, and in our account the following day. Payments via their subsidiary in Luxembourg.

Previously it was via Dublin.

I have noticed payments have been delayed, but ours went from next day to 2 days later.

Our Airbnb payments in Ohio are still on the morning after a guest checks in.

The regular thing that happens for me is if guest checks in on Thursday, on Friday Airbnb says Payment sent, but, of course not deposited in my account till Monday.
I was reading on another forum about 2020 with payments not happening for anyone for 4 days to 2 weeks. People were really upset and saying they were going to cancel guests and get off Air. I wasn’t hosting then, so missed all of that, thank dog.

Before my COVID pause, I would see my payment around 8pm on check-in day.

Are you sure about that? Their policy has always been to payout 24 hours after check-in. I always received my payments between 3pm and 4pm on the day after check-in. (except for the one time it came 2 days later for some reason and Airbnb couldn’t tell me why).

@NordlingHouse My checkin time is 3:00 pm. I have always gotten payment around 3:00 pm 24 hours after the guest checks in. If you’re having it deposited into a bank, they are saying 5 days (potentially) to allow for the weekend. My bank then held it for 2 days so I didn’t see it until Wednesday. I switched to PayPal direct deposits two years ago and once I get the notice that payment has been made from Air, it is immediately available in my PayPal account.

once I get the notice that payment has been made from Air, it is immediately available in my PayPal

Similar but different….when I had payments going to an account with a small credit union, I would receive notice of payout and receive $$$ 4-7 days later.

I bank with the same regional bank that I’ve used for 63 years. They haven’t changed any of their procedures, and always make funds available as fast as possible.

I had a bad enough experience with PayPal that I won’t go near them.

I’ve done this for 10 years and 24-48 hour payments were the norm until about 2 years ago when they slowed. I just re-opened and have been pleased with seeing 24-48 hours payments again.

Well, it was in my account this morning. So 4 days, but it included a weekend.

…now they’re getting better! The last payment came on the day after check-in, but the others checked out on Friday and Saturday.

I’m in Spain and they used to pay the day after the guest arrived.

I’m in Spain and they used to pay the day after the guest arrived.

I’m in Spain and they still do; payment sent day after check in and in bank the day after, although sometimes delayed by weekends. No change at all.

That’s interesting, because I received a ‘We’ve issued a payout’ email today, informing me that the money “should arrive in my account by 13th May” - so, a week after I’ve supposedly been paid. Which is better than some recent ones.

For some reason this site won’t let me upload a screenshot.

That’s a standard block of text, we get the same. However, it’s never taken that long, usually in the day after receiving the email.

Which bank are you using, is it a domestic Spanish bank?

I had been reading so many posts over the past year or two about delayed payments, that I was fully expecting that when I just reopened after a 2 year Covid hiatus.
But the payout for my first (current) booking was released within 24 hrs of check-in and appeared in my bank account even faster than in the past.

this site won’t let me upload a screenshot.

New members have to participate awhile to get privileges such as ability to message other members, post links and screenshots, etc.