According to recent news, the Wynn Las Vegas is putting an Amazon Echo in every hotel room. See:
http://www.theverge.com/circuitbreaker/2016/12/14/13955878/wynn-las-vegas-amazon-echo-hotel-room-privacy

Are any of you using the Amazon echo in your Airbnb? Do you have any sense if guests like it and what value it provides like weather? music? timers for cooking? more advanced features? Can you limit the functionality so that guests can’t order stuff from Amazon? In short, would you recommend it for Airbnb?

I have an Amazon Echo connected to the Smartthings hub that guests can ask Alexa to turn on/off the lights or the TV/Roku.
http://www.airhostsforum.com/t/home-automation-devices/6025/12

I took Amazon Echo device (which is pretty sophisticated by itself), and added few extra capabilities:

Integration with the building:

Also, I’ve found out that I repeatedly do few things like I recommend dining places, some basic house rules like “please lock the door on the deadbolt when leaving”. Since we live in San Francisco, next to the waterfront, and pretty usually people ask about best places for jogging, and other stuff like that.

Having that, I have additionally built FAQ with house rules, recommendations and WiFi password.
http://www.airhostsforum.com/t/artificial-intelligence-powered-guest-experience/3688

Here’s a helpful vide from @Emil_Mikhailov that shows some of the Amazon Echo functionality at work:
https://www.dropbox.com/s/khj8t4qneytd6lc/Jasper%20Demo.mov?dl=0

I have an Echo dot in my flat. I haven’t done much in the way of integration yet - just the TV/fire stick so far. The thermostat is next. Then maybe a light or two. Some guests get a big kick out of it - ask it silly questions, etc. Others will ask about the weather then ignore it for the rest of their stay. My most recent guest was worried it was a recording device and asked if it was going to take a pic of him in the shower. It’s in the living room. I “think” he was joking. But overall I think guests like using it.

Interesting. I could see for every guest that was thrilled or intrigued there would be one that was fearful. The OP’s location in San Francisco might be better than some places.

One quick update, it’s easy to disable “voice shopping” with the Amazon Echo or to require a four-digit pin for purchases.

How to Enable, Disable, and PIN Protect Voice Purchasing on Your Amazon Echo

There’s a whole host of tricks your Amazon Echo is capable of and, among them, is a pretty neat one: you can order products right off Amazon using voice commands. Read on as we show you how to enable it, disable it, and add a PIN protection code to...

I wouldn’t find value in it, and find it slightly gimmicky.

Probably have had 30 or so large groups of 8-11 people since I’ve had the Alexa. I have 3, one in the kitchen and in each bathroom. Not one complaint. They are using it for music 99% of the time, so they’re asking for Pandora stations or iHeartradio playlists. I’m seriously thinking about getting a full Amazon music subscription so they (and I) can access the full library of songs ala Spotify at any moment.

Otherwise, few people ever figure out how to use it to control the lights/Nest/TV. Even if they do, they do it as a parlor trick, and then forget about it later.

I’m thinking a printed out paper might help guests find their way through the list of commands? I wish I could customize a specific set of abilities, and have Alexa tell guests only that specific set.

That’s very helpful, thanks! We’ve taken to putting notes, signs, and laminated printed instructions all over to help with various recurring questions. After a few guests were completely befuddled by our low-end home theater set up, I assembled a step-by-step guide that included photos of the remotes (see attached low-res photo). So, I agree that posting a list of “things to do with Alexa” near the Echo would be worthwhile. 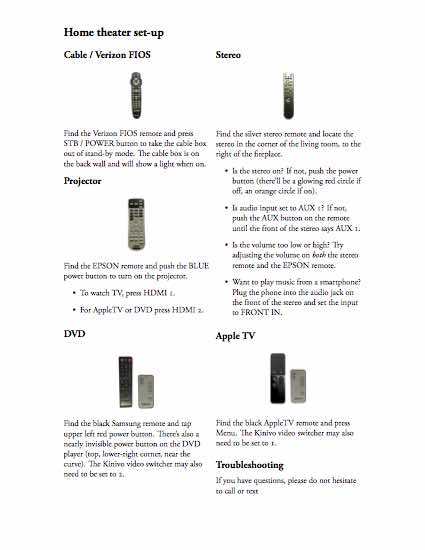 Below is a working list of “skills” for Amazon Echo that might be useful for hosts & guests (additional suggestions welcome!). I’ve organized them by technical difficulty for the host.

Hey folks, as a final update for now, I bought a $49 Amazon Echo Dot to tinker with. It’s got a so-so but good enough speaker and otherwise is reported to work as well as the full sized $179 Amazon Echo. In addition to being cheaper, the smaller speaker in the Dot is actually a bit of a plus for us in that it reduces the likelihood of excess noise. Right now, the plan is to put the Amazon Echo Dot on a bedside table with a small card. The Card will suggest something like the following:

Why do this? To quote a recent article:

“The ultimate goal here,” he said, turning to a well-worn Disney phrase, “is to delight and surprise our guests.” 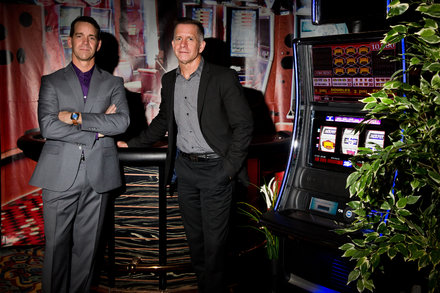 Coming to Carnival Cruises: A Wearable Medallion That Records Your Every Whim

The system, inspired by bracelet technology at Walt Disney World, is an advance in serving guests and tracking their wants.

Just got the Google Home (which is pretty similar to the Amazon Echo) for my own house, and I love it!

That being said, I don’t know how inclined I’d be to put one in a rental. It seems a bit like an unnecessary luxury. While it’d definitely add to the experience, I don’t know if anyone would be willing to pay extra for a room that had one. I’d also be concerned with people taking the device.

SmartHosts also just had a discussion on this (and other smart technology) in relation to privacy. If that interests you, their discussion & article is here: https://www.smarthosts.org/posts/EjEhRgcQen7LZFYQ5/just-how-dangerous-is-alexa-thinking-of-adding-one-to-your

I agree that theft is a possible issue. I was hoping the Amazon Echo might send an alert when offline which would make tracking theft fairly easy but, so far, haven’t found such a feature.

I’ve read good things about the Google Home but one advantage of the Amazon Echo Dot is that it’s only $49 and, so, a relatively low risk experiment. I don’t imagine that anyone would directly pay more for access to a voice-activated speaker. I could see it helping a bit with improving the customer experience, though, which could indirectly increase revenue for guests who enjoy their stay a little bit more and leave a slightly better review as a result. As @austinmodernluxury notes above, guests seem to enjoy playing music on them.

In essence, I view it as a delightful internet-era radio/alarm clock for listening to music, news, weather and setting a wake-up alarm. So, in many ways, the applications are quite mundane but still helpful for guests.

Wouldn’t theft simply result in a loss of deposit and a bad review? I’ve never once had a concern with it.

FYI, a guest once left my (unplugged) Echo on my outdoor deck, and it had been pouring rain by the time I discovered it. I assumed it was dead, but after drying it worked just fine. Seems a lot hardier in weather than I expected.

I agree that it’s not a big issue. Generally, we find guests to be well behaved but have occasionally had things go missing (e.g., a Roku box connected to a TV) or end up abused (e.g., your example of an Echo left in the rain). The challenge in our case is that we have enough turn over in which only our housekeeper sees the room that it’d be easy for us to overlook a missing Echo for a couple days. In that scenario, it might be hard to pin down which guest made off with it. Still, your examples have helped convince me that the benefits outweigh the risks.

Separately, are all three of your units the bigger Amazon Echo or are you offering a mix of Echo and Echo Dots?

Glad I searched for this topic because I am thinking of getting an Echo for the cottage - but the Echo with the screen. I need to investigate further but so many guests ask the same questions over and over. Where are the grocery stores? What is a good hiking trail? I have a 3 ring binder handbook and books and pamphlets and tons of paper resources. Nope. Would I be able to put the contents of the handbook as a resource Alexa should use first?

Another option at this point may also be a low end tablet with a locked down interface as a consierge that only allows the guest to surf my resources and a web browser.

@owasow How do you create FAQ like where are the trash bags? I did not see it in the pdf.

I never did get a FAQ working. I don’t imagine it would be hard but it was low priority given other demands. I should also add that after about eight months of availability in multiple rooms, I can report that they are (1) mostly not used (and definitely not stolen), (2) when used are almost exclusively used to play music (echoing @austinmodernluxury) and (3) are unplugged with some regularity. On the last point, I’m not sure if that’s because guests need a plug for something else or are concerned about privacy. On the plus side, we’ve received multiple reviews that praise the “extras” we offer and I assume the Echo’s do delight some small percentage of guests. Without deeper integration of our local knowledge of things like restaurants, things to do in town, answers to simple questions like “where’s the iron”, etc., though, it’s a bit of a missed opportunity.

@owasow Thank you for the feedback.

I bought one for my house and most of my guests love it but mostly for playing music and asking about the weather. It is just an added perk, not a necessity but I am glad I have it.