How many of you commenting here are White?
Says she ‘poking the hornets nest’.
Just thinking about walking in someone else’s shoes other than mine.

I believe I am one of the few regulars that post here that are not white @Lozette . Why?

I was curious really, regarding some of the problems expressed regarding Airbnb donating money.Some didn’t seem to appreciate it.
I’m glad to hear from you as result.
Where do you live- in the US!

Why do you assume I live in the US? There are other parts of the world too @Lozette

I didn’t assume - I said Where do you live and suggested the US, but as a question. Where do
You live?
Where do you think I live?

Oh I see - there was an exclamation mark rather than what I intended, a question mark.
Please answer I’m interested now.

Black lives do not matter to any of these companies. They are just purchasing indulgences.

If black lives would really matter to them, they would move their company to a black neighborhood and hire black people.

AirBnB paying $500.000 to BLM is an insult to all the low wage workers that just lost their jobs at AirBnB.

It is far more lucrative to give them fish and make a selfie for social media while doing it, than learn them how to fish.

Black lives do not matter to any of these companies. They are just purchasing indulgences.

I don’t disagree. They have one core value and that’s to make money/return value to shareholders. There are a few brands who truly care (Patagonia, Ben and Jerry’s come to mind) and have consistently done so for decades. The rest are opportunists. But the optics matter. “Virtue signalling” is rampant on the right and the left. But meanwhile millions of dollars will be transferred to racial justice organizations and that’s cool with me.

On another note, I found this article from 2016 where the AT&T CEO defended BLM. The list is getting quite long and I don’t see how an American host can keep their Airbnb untainted by indirect support for Black Lives Matter or other racial groups who have exactly the same aim and methods.

Randall Stephenson shares an emotional plea to start a conversation about race: "Black lives matter. We should not say 'all lives matter' to justify ignoring the real need for change."

It looks like the NFL is another brand that’s thrown in with Black Lives Matter, at least rhetorically. Despite nothing behind it so far, the right is pissed. Let’s see if their NFL boycott has more effect than their Disney boycott. The NFL has pledged allegiance to the Black Lives Matter movement, apologizing for the way they responded to peaceful protest of their players in the past.

Bezos doubles down on BLM support (and he is clearly a full of it hypocrite: )

Corporate America is providing a lot of cover for Airbnb hosts who don’t agree with BLM but want to remain listed on the platform. There probably won’t be the exodus of hosts I hoped for.

Not that any conservative want to take advice from me but perhaps a better strategy would be to donate some percentage of their proceeds to Fraternal Order of the Police or some other Blue Lives Matter group and disclose same on their listing. That’s what I do on my listing, each year I list what non profit will be the recipient of the 10%.

Telling the truth about the NFL and by extension all the other bandwaggoners.

It never leads, only follows, but history always bends in the arc towards justice, always. And Kaepernick will always have started out on the the correct side.

Following up on AMAZON’s donation and support of BLM, here is Jeff Bezos’ reply to an offended customer. 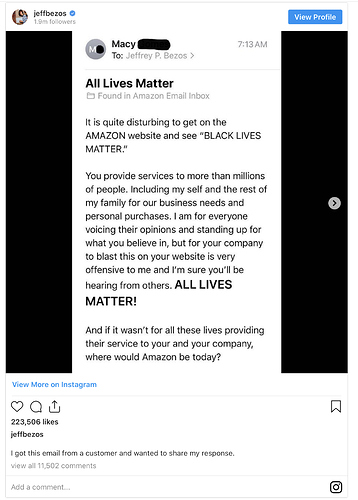 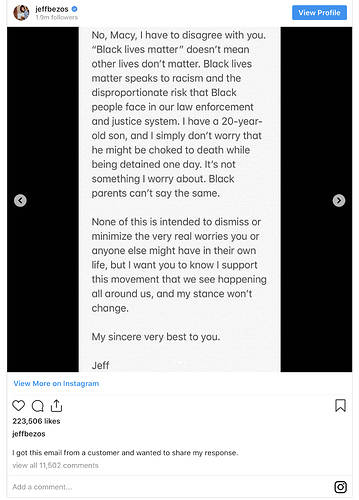 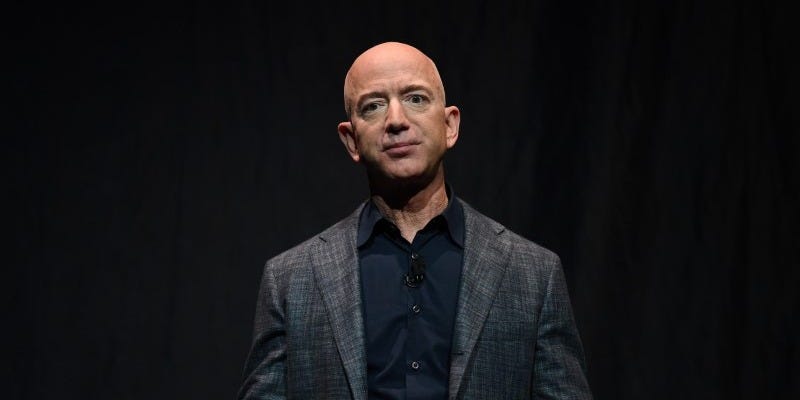 Jeff Bezos responded to an 'offended' customer who wants Amazon to say All...

Jeff Bezos shared an email he wrote to a customer who complained about the "Black Lives Matter" banner on Amazon's website.

And worth noting, that support of Black Lives Matter does not mean not supporting Police.

That’s what I do on my listing, each year I list what non profit will be the recipient of the 10%.

I advertise directly to activist groups that want to visit during the legislative session (my slow season, Jan-April) that I’ll give their members a discount if they come here as citizen lobbyists. I’ve only had a few takers, but 95% of my business is May-Sept.

I’m glad that Airbnb donated to the BLM even though it may be promoting their brand. However it’s an extremely important cause in my opinion.

A little known fact is that the City of Glasgow, during the 18th & 19th century, was built on the back of slavery.

This gives a bit of background, but a quick Google of “Glasgow tobacco lords” provides a lot more detail.

As a mark of solidarity with what has been happening around the world in recent days, some enterprising chaps from my football club decided to rename some of the streets around the city centre.

It’s currently the fourth or fifth post down, something is wrong with Twitter today, inserting individual tweets throws an error on here. 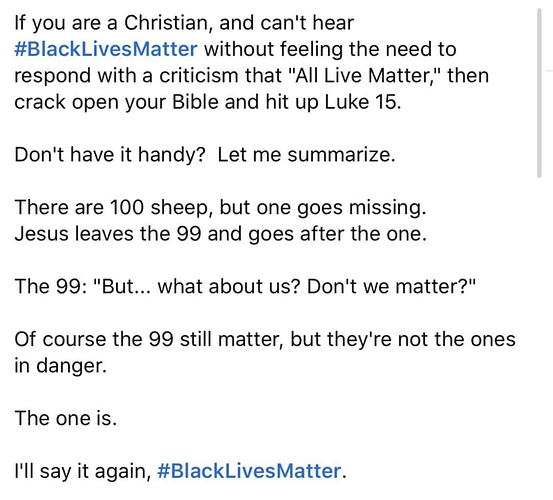 I am in search of another outlet to use to vacation.

VRBO and Booking dot com are the two biggest. There are tons of them. If you really cared you should have quit using Airbnb long ago.

Are you planning to boycott the other brands supporting Black Lives Matter? Lots of tech companies are supporting them so every time you use a computer or an app you are supporting BLM in a small way.

Absolutely not true. I’m not sure if you’re just uninformed or not, but if so, @Rolf gave a bible-based version of this above and this is a secular version, a quite well known illustration by Kris Straub (chainsawsuit.com). I kind of thought everyone had seen this by now but if you haven’t, it’s a good one. 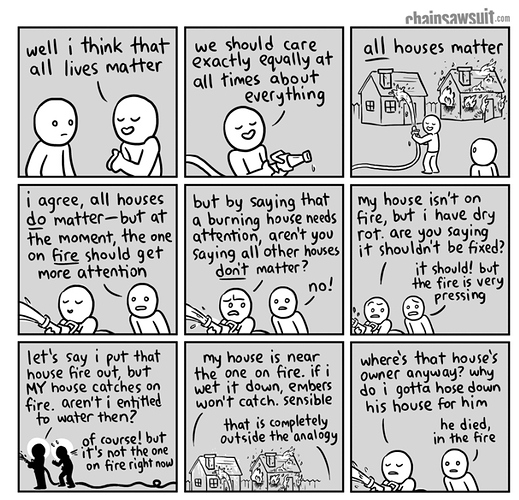 Not that any conservative want to take advice from me but perhaps a better strategy would be to donate some percentage of their proceeds to Fraternal Order of the Police or some other Blue Lives Matter group and disclose same on their listing.

??? Conservatives are pretty horrified with the militarization of domestic police; the execution of Daniel Shaver in Mesa AZ (video link, warning, very disturbing); the police killing of harmless Tony Timpa, who asked for help in Dallas, and was killed as the cops laughed and joked (video link; same warning); the slaying of Justine Ruszczyk in Minneapolis after SHE asked for help; and it goes on and on.

One could argue that some proportion of the black lives taken by police involved active criminals posing a threat to officers, but these links above are cooperating, non-criminal WHITES who got equally blasted or otherwise sent into oblivion.

Black lives, white lives, black cops, white cops, it’s a mess and the departments can all get defunded for all I care.

Conservatives are pretty horrified with the militarization of domestic police;

I’m not even going to get into this. All I was saying was that with MY well left of center views, any advice from me is probably going to be disregarded. I was discussing with another forum member the issue of BLM tainting the Airbnb brand. Much of her target demographic is gun loving, ATV driving, Harley riding, police loving, God fearing whatever they ares. Stereotyping them as conservative…my bad. I’m not seeing the conservative condemnation of militarized police of which you speak but I’m just looking in all the wrong places.