hold on tight with this one.

this August we hosted a very unpleasant guest, presenting the features of a narcissistic pervert. This guest openly blackmailed us for a negative comment (this is written black & white in the conversation) if we didn’t give him 300€, which we obviously refused. He created an entry in the resolution center, asking for 300€, saying the listing was not conform to the description, which we refused.

After he left, this person harassed us via SMS and the Airbnb messenger and we weren’t able to block him after reporting him (I provided a video of the impossibility of blocking him to the Airbnb support, who fixed this and blocked him for me). The harassment was so horrible that my wife did some sort of burnout, now she can’t watch our Airbnb account and is scared every time we have an Airbnb notification. She is 100% traumatized.

Today, a month and a half after, the Airbnb customer service contacted me asking me to pay the guest the 300€ , because in my listing I have written that “the sheets are provided” and that the guest expected to have several sets of sheets from reading this, and so the listing is not conform with reallity.

The guest says the fact he only had a single set of sheets created damages for him that are valued to 300€.

I tried to explain to the support that in French “les draps sont fournis” (the sheets are provided) doesn’t mean that we provide several sets of sheets but they don’t care.

Now the support team is analyzing the case for indemnizing the guest 300€ based on this.

If you have in your listing “sheets are provided” I wanted you to know that you may be asked 300€ of indemnization by the guest, with more aggressivity than understanding or help from the Airbnb customer service.

Here is an image proof of the conversation (in French, sorry) : 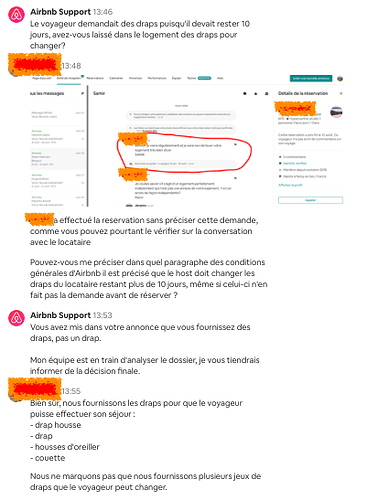 I wanted you to know that Airbnb not only did not ban a guest who wrote black on white a comment blackmail (the support told me this is a different issue which has been treated, indeed the comment was blocked but the guest still has his account), severely harasses a host over the phone and the Airbnb messenger, and that they will make you pay 300€ because they dont get that “sheets” doesn’t mean “several sets of sheets” (but I am French, maybe it is understood differently in English, but my listing is in French and in French it is pretty clear).

Right now I feel at the lowest and am considering removing all my listings from Airbnb, I have the impression of working for a neurotic micro-manager and this is not what I am looking for.

Thank you for your time

If there initially was a misunderstanding, was it because the guest was staying for more than a few days and expected the sheets to be changed periodically?

I only allow a maximum of 7 nights, but if I allowed longer stays I would require a complete linen change after 7 days.

Or did the guest expect to change sheets himself, and expected spare sheets to be available? Extra bedding should be available because guests will sooner or later have “accidents”.

How long did the guest stay and what was the value of the reservation?

If it was more than a week, it’s somewhat reasonable to expect a change of sheets, but I wouldn’t leave them for the guest, I would ask that they contact me and arrange a time for me to come and change them out.

If the stay was less than 1 week, then I would assume that the guest was expecting daily linen changes like a hotel would do, but I wouldn’t expect Airbnb to agree that you should do it if it’s not mentioned in your listing.

Airbnb customer service is a gamble. Some people (hosts and guests) know that they can keep contacting Airbnb until they find a customer service agent that agrees with them. I suspect this guest is an expert at gaming the system to get his way.

Your only response needs to be “No refund. Sheets were provided for this reservation.” Repeat as many times as the guest requests a refund.

Blocking has been broken for a long time. Only Airbnb can do it.

The harassment was so horrible that my wife did some sort of burnout, now she can’t watch our Airbnb account and is scared every time we have an Airbnb notification. She is 100% traumatized.

I’m sorry this happened, but this is a fact of life in any customer-facing service industry. There are entitled customers that become loud and aggressive in order to get what they want and you have to deal with them. You can stand your ground or give in to their demands, but you still have to deal with them.

Airbnb’s does not ban guests for attempted blackmail. The only thing Airbnb will do is remove any negative reviews, which you said they did. We all know this already. Now you know it, too.

Again, I’m sorry this happened. You will get this type of guest no matter what platform you use for renting. The methods may change, but the behavior will be the same. Bad guests are more likely to target new hosts, so if you’ve only been hosting a short time on Airbnb, this might have been planned by the guest. To be totally honest, guests can be a lot worse than this, so you need to be prepared for even worse behavior.

Facebook posts and tweets: “Our guest said he would leave a negative review if we didn’t refund him 300, documented on Airbnb messaging. When we did not pay up, he left addt’l harrassing messages and filed a complaint with Airbnb for 300 due to “sheets not provided.” We provide bedsheets of course. Airbnb CS keeps asking me to pay the guest 300 despite my documentation and his extortion attempt. Why?”

Airbnb is not a hotel.

If you want to have spare sheets you ask before booking, not by opening a claim after you leave asking 300€ (basically a full refund).

The real problem is not about the number of sheets, it is about a guest who writes on the Airbnb messenger that if you do not pay the 300€ he will sue you and leave a bad comment, writes you everyday for weeks also by text messages.

It is about having the customer service coming a month and a half after the guest departure, first accusing you of not having provided sheets for the guest. It is about having to explain that the guest lies (thank god I have a written evidence of the guest saying he has sheets), that you provided the sheets, then having them accuse you of providing a single set of sheets (where is it written in the terms and conditions that a host has to provide several sets of sheets ?).

It is about the “customer service” absolutely ignoring the health issues caused by the harassment of the guest and talking to you like a dog.

I am used to a partial treatment on Airbnb, with the customer service caring a lot more about the guests than the host. But this behaviour from a customer service person is way beyond acceptable.

There is documented evidence of extorsion, harassment and blackmail. Did they even draw a line about at which point they should not endorse bad guest behavior ?

Can any guest ask for a full refund when they leave because they judge they should have been provided a second set of sheets / more toilet paper rolls, without even asking the host ? Can any guest openly harass, blackmail and threats of suing the host without being blocked ?

Have you gone to Airbnb Facebook/ twitter accounts and complained on there? That was the only way that I got some attention.

It is about having the customer service coming a month and a half after the guest departure,

This is either because Airbnb customer service is just so scrambled internally or because the guest is harassing Airbnb as much as they are harassing you. By now, they just want the guest to go away.

Can any guest ask for a full refund when they leave because they judge they should have been provided a second set of sheets / more toilet paper rolls, without even asking the host ?

Yes, they can ask. But getting a refund is another story.

Can any guest openly harass, blackmail and threats of suing the host without being blocked ?

I’m sorry this happened, but this is a fact of life in any customer-facing service industry. There are entitled customers that become loud and aggressive in order to get what they want and you have to deal with them.

You will get this type of guest no matter what platform you use for renting.

@Brian_R170 is correct. This type of guest is on every platform. I don’t think any platform provides protection or support when this awful person rents.

This person sounds like they think you are nice so you must be weak, which is not true.

My good friend who is also a host had something similar happen. She firmly stood her ground. It was a 6 week process with Airbnb and she finally prevailed.

I’m sorry this happened to you. Do not pay because it is easier than continuing to say NO. If you pay either he will do this to someone else or he will post/brag on another website “how I got my money back”.