Today, ads have started to appear on this site. On my iPhone, this has rendered this site totally unusable. On one tiny screen, I have two ads, both at the top and the bottom. Hardly any room left for content.

Out of curiosity, who decided to monetize this site? Who receives the proceeds? Do these funds pay for hosting, or are they to increase someone’s income?

Susan, I am sending you a PM.

No adds on my version? I’m using Apple iPad right now? I’m not great with IT but is it your browser by any chance? I hate to sound like an IT help desk but have you shut down & re-logged on?

Oh give me a break… really?

Oh give me a break… really?

What is that supposed to mean? I said I’m not any good with IT and was genuinely trying to help you, geezeee!

I do this stuff for a living… I am generally running at least four browsers. There are ads on this site… sometimes they show, sometimes I just see the tags where they will go.

Here is a screenshot of my iPhone screen: 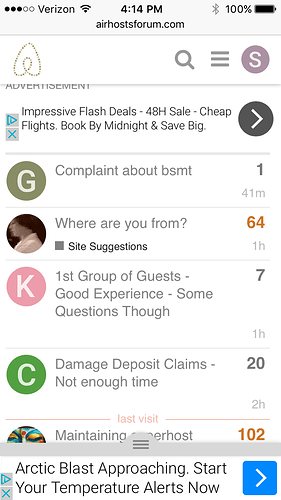 My firefox debugger indicates that at the moment, this site’s server is trying to establish a connection with the ad server, but it isn’t connecting properly. Earlier this day it was. The browser version of this site is not at issue. There will be an ad at the top. For me, the issue is on the iPhone where I have ads on both top and bottom with very little wiggle room.

I’m seeing ads here on the computer. I almost never use this site on my android phone so not an issue for me. 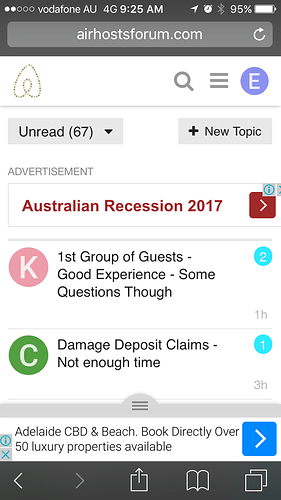 On my android phone I have a tiny banner at the top of the screen. Running a forum requires hosting on a server, that does have a monetary cost. If this forum owner makes a little profit, who cares ?

If this forum owner makes a little profit, who cares ?

After all, this resource is worth its weight in gold.

P.S. Not seeing ads here (laptop) but I have an ad blocker.

@jaquo So you aren’t doing your part to support the site.

[not being serious. I can’t use an adblocker and get my actual work done.]

[not being serious. I can’t use an adblocker and get my actual work done.]

You know, that’s a very good point! I was thinking about myself and not about the costs of running the site. Ad blocker is going to be turned off

This site is invaluable and a few ads aren’t going to bother me.

I thought I just hadn’t noticed them before. They’re fine on the non-mobile site, but they’re terrible on my phone.

Yup. Ads all over on both laptop and (gasp) tower computer!

I don’t know if we are seeing the same thing or not, but it is fine on my iPhone. It is just a small ad right before the main content and a second one right after the main content. The best thing is that the ads scroll with the screen, so I I am not missing any content area.

It seems we are about to have a recession, depressing

LOL. Is this a canary in the saltmines kind of thing?

Hi @smtucker,
Tom here - site administrator of the forum. Over the past year the number of users has grown (which is great for the community). However that meant the server hosting costs shot up as well, to the point where I was paying hundreds per month out of my own pocket. I’ve recently switched on sponsored ads to try and recoup some of the costs with operating the site going forward.

However, I do see your concern that it renders the site with not much room for the actual content that hosts are interested in seeing, so I’ll talk to the sponsored ads provider to not include more than 1 more on a given page.

Thanks for the continued support and patience.

@tom2 Nice to meet you! Is there an option for those of us who value this forum to pay a donation to offset some of your hosting costs? In exchange for reducing the number of ads per page to just one? Just a thought… and thank you for hosting.

However, I do see your concern that it renders the site with not much room for the actual content that hosts are interested in seeing, so I’ll talk to the sponsored ads provider to not include more than 1 more on a given page.

Tom, would it be an option to put a sidebar to the right of the content and have ads in there? I do this and they don’t interfere with the content at all when using a laptop and on the phone the sidebar is at the bottom of the page. That could be the solution for everyone?

Hi, Will clicking on an ad increase Tom2’s take? I never, ever click on ads, but this is the best short term rental site anywhere!