I have always been very careful to never list my daughter’s age or gender anywhere publicly.

A reviewer included the age and gender of my child in a review. My concern is that this info can forever after be used by a possible predator who finds my childs gender and age to match their interest. They could then potentially instant book a stay in order to be in the same house.

I asked Airbnb to remove this private information (the age and gender of my child), and I’ve been getting the run around.

Some Airbnb support folks who I talked with understood the issue and how extraordinary problematic this could be. But those people also seemed unable to resolve the issue.

I believe that for this to get resolved correctly, likely Airbnb management needs to be involved for making a policy change. But I’m not sure how to make that happen.

I absolutely love being an Airbnb host. And Airbnb support is typically fantastic. Although in this case, Airbnb is directly putting my daughter at risk unnecessary. I would be fine with a review that just referred to my “child”.

I’m very interested in any thoughts, options, or advice that you have.

I love being both a father and an Airbnb host.

Mountains of thanks in advance for any of your thoughts on the topic,
-HostHost

I would call Airbnb support again and say that if it’s not removed, you will need to stop hosting because this is a safety issue. If they don’t help you, then close the account and open a new one. You will lose all of your reviews but your child’s safety comes first.

I agree with you, Airbnb should remove this review. Use the word “unsafe” when talking to Airbnb.
Alternatively, message the guest and explain to them that while you know they didn’t intend it as such, mentioning the age and gender of your child in the review is a safety concern for you and ask the guest to please ask Airbnb to remove the review (it’s important that they ask for it to be removed, not edited, as reviews cannot be changed). Airbnb will remove a review at the writer’s request- it’s much more straightforward than you trying to get them to remove a review written by the guest.

I cringe whenever I see hosts using profile photos of their children.

I’m sorry that this happened to you.

I got a review removed just because they mentioned my address and I stated that this was a safety concern.

Use the word “unsafe” when talking to Airbnb

message the guest and explain to them

Airbnb will remove a review at the writer’s request-

I would both write the guest and write Airbnb.

My preference would be for you to write rather than call Airbnb so that you can state your concerns precisely, so that a CS rep could easily forward it to another for review, so that you can document that you have put Airbnb on notice. You would provide a great service if you could suggest to Airbnb that they make it a written policy to:

Please keep us in the loop on what happens. I’ve got to believe that if you take @muddy’stwo-track approach that you’ll be successful.

May I ask how citing this information was relevant? That is, why was it even mentioned? Maybe the review can be removed due to having irrelevant information.

Your advice is stellar! Thank you muddy!!!

The information about my child wasn’t actually relevant, but they said that they didn’t like a kid being in the house. The guest never met my kid in person. They just heard her in the other room on a video chat at one point and I mentioned her age at the time, incorrectly assuming this would not be a problem. I’ve done very well in the past in assuming that my guests are awesome well meaning people.

If the review is otherwise good and you want to keep it, they may let the guest edit the review, but you’ll have to ask the guest to call them. It’s worth asking about if you don’t want to lose the review. I had a guest leave a glowing review that had a very unfortunate typo in it that came across kind of sordid so I called in about it. And they said that if I wanted to contact the guest that she could call in and they’d let her edit her review.

It’s also possible that they’ll just remove the line about your daughter, which would be easiest. They went in and edited a guest’s name for me one time (because I stupidly called the guest the wrong name not once but three times in the review, lol). 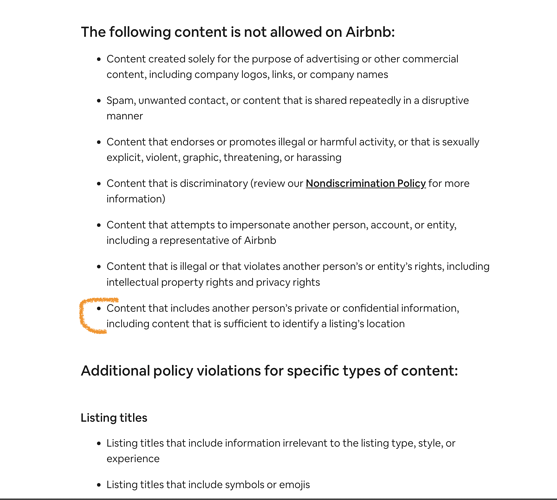 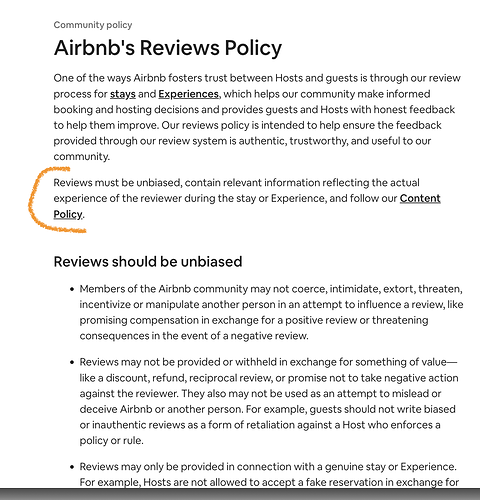 I plan to use the word “unsafe”. Thanks!

I plan to message the guest and explain. Although I don’t think it will help. This guest was a very very rare case of being a bad human. I’ve never before had a guest who I considered to be a bad person. So I’ll ask because it doesn’t hurt for me to do that. But it’s unlikely they will ask for the review to be removed.

I agree that writing is a much better way to go than spoken!

It’s tricky to get an airbnb rep to champion a policy change such as “Remove reviews upon request when a minor’s age or gender are stated in a review”.

But it makes sense and is common sense. If a guest put my age and gender, that wouldn’t matter. It’s only because it’s a minor that it’s an issue, just like you said.

THANK YOU VERY MUCH for your sage advice!

YOU ARE INCREDIBLE JJD!!! THANK YOU!

I’m just hoping to have the personal information (age and gender) about my child removed.

I will quote the information that you said.

The argument is if “age and gender” is private information. For an adult, maybe it’s not. But for a child it certainly should be. But one airbnb support person said age is not personal or private info.

I will do exactly what you said and aim to refer to their policies as closely as possible. Thank you SO SO SO much for taking the time to carefully make this so clear.

but they said that they didn’t like a kid being in the house. The guest never met my kid in person. They just heard her in the other room on a video chat at one point and I mentioned her age at the time, incorrectly assuming this would not be a problem.

I assume you mention in your listing that you have a family, and that normal everyday living sounds may be heard between your unit and the guests’? If not, you should.

Me earning money is also key to my childs well being. And big businesses tend to respond poorly to ultimatums from small fry fish like me.

Hopefully I can navigate this without needing to loose a zillion 5 star reviews or deal with de-listing and re-listing, which I believe is against Airbnb policy anyhow.

Thanks for your thoughts and for caring Ritz3!

that if it’s not removed, you will need to stop hosting because this is a safety issue

this threat has zero wind in the sails. We all know that. and the CS staff in the Philippines know it too. Sadly, it isn’t going to work to threaten to pull your listing. and btw if your daughter is on Snapchat and Tiktok, then your concerns of “privacy” are kinda moot, right.

Better to use the angle that posting personal information in a review goes against some policy, even then it’s a long shot.

Please @HostHost update us on the outcome of this one.

Not just unsafe but per @JJD 's excerpt from Airbnb’s policy that it reveals information that is ‘private or confidential.’

If the location of the property is considered private and confidential, not to be revealed, surely the age and gender of the Host’s minor children are as well.

I pinged Airbnb support again using the advice given here. Especially what JJD recommended about siting the airbnb policy.

I also requested that whoever in support works this issue reflect back to me my concerns. I also said I would prefer that this ticket be worked by a woman or a person with a daughter.

So far, the issue is yet again getting passed between many different support people, like it’s a hot potato that nobody wants to touch.

When I was previously getting the runaround, a the support issue would get passed to many different people, till somebody eventually just closed it without actually discussing the issue with me or properly understanding the issue. In one of those cases, the airbnb support person confused my name with the name of the person who had left the review.

I will report on this thread how it goes with Airbnb support.

Thanks so much for all the help, fantastic advice, as well as the emotional support.

Yup yup. I did just this. And yes, Airbnb should clearly be helpful with this. It’s quite obvious. But this is something I’ve been working on for way too long, as yes unsuccessfully.

It is usually very effective to QUOTE review policy back to them in writing. And write, do not call.

By way of calming you, most children who are sexually abused are victimized by someone known to them. A stranger booking your room to assault your daughter is much less likely than a guest returning multiple times and befriending your daughter, and then victimizing her. You have more to fear, statistically speaking, from relatives, friends and neighbors. So while I agree 100% that this review should be removed at your request, “stranger danger” gets too much blame. I guess it’s just easier to think about some unknown “them” than being betrayed by people you’ve trusted.

Yup yup, this is exactly what I did with clearly quoting the policy and writing.

Mind you, airbnb support is not keeping it as one thread. It keeps being passed to different people and each time, all previous text needs to be looked up again. When that happens, I try to include all of the previous info each time.

Good point KKC. But those statistics were also generally collected before anybody could instant book in a household. 1 in 6 women are sexually abused, many as children. Even if it’s less often strangers, I’m still going to aim for common sense and still worry. So yes, stranger danger gets too much blame, but that doesn’t mean there is no risk. Thanks.