After being listed on Trip Advisor for almost two years now - we just got a reservation!

But I have a question about it. It says:

So, the guest hasn’t paid yet!? When will they pay? I don’t like blocking off these dates on Air for a guest who hasn’t paid.

Do you block dates out yourself by hand? I have a service that syncs calendars for me - Air and TA - and they don’t block out dates until the dosh is paid. I’ve had about three bookings from TA, compared to about 50 from Air in 4 months, but numerous enquiries of people wasting my time. I had to contact them the other night and nearly threw the phone across the room with impatience at their voicemail system. They are rubbish and I usually forget about them.

Do you have the listing on the split payment? If so, remove that option for this reason.

Go into booking policies in your listing and see what it set for, you can amend it anyway

Thanks @konacoconutz and @cassid - I didn’t realize there were different options for payment. I did notice later it said they had made a deposit of what looked like a little less than half and that the rest was due by November 25th. (The booking is for December 23rd). So, I’ll check on that and definitely change it.

@Joan Your experience is EXACTLY my experience with TA! I HATE them so bad! We’ve had so many inquiries that have just wasted our time. (And when I say so many - I mean so many for TA - like 10 in a year or two)! But they don’t even seem like they’re coming from legitimate guests they’ve all been so odd. I think we’ve had two in the last one or two years that seemed legit. But no one has booked - until now. Thank God we’re not relying solely on TA! But it would be nice to have a decent backup plan in case anything ever happens to Air.

Oh and we’re able to charge substantially higher prices on TA. I don’t know if that’s why we’re not getting many bookings - but we’re still lower than other people in our area who are on TA. We have to charge more because they take out 15-16% - which also makes me hate them more!

I hated them badly when they were flipkey.
Honestly, I got friends to give me a few reviews and that really helped hone down the type of guest that is a fit. I can write one for you if you want. Just PM me. Going with no reviews will result in some mismatched guests.

I don’t get much business from them, have had about 3 or guests, they were nice people. I had an issue with not charging for the second person, found them useless and I just worked out something myself with the guests.

I hate that they insist on paying you via paypal.

We have to charge more because they take out 15-16% - which also makes me hate them more!

The other plan is $599 a year and you can accept payment however you want. Plus, you have guest contact information before they book.

FYI - for anyone using their system. You need to carefully watch the tax amount. They will not automatically add your tax to additional guest, cleaning fees, etc. So then you are on the hook to pay the state those taxes, if you don’t build the taxes into those fees.

Just PM me. Going with no reviews will result in some mismatched guests.

Thanks so much Kona! I will PM you.

Hmm… maybe you’re right actually. I forget what made me think that now but I remember I had to make the price a lot higher to get the same thing I would have gotten through Air. And it seems they’re charging the guests a lot more and we’re not getting as big a piece of it. Maybe it’s just how prominently they display what they’re charging the guest that makes me feel that way.

VBRO has a much higher % fee - probably the 16% range.
I think TA has the same as airbnb - 3%.
Look at the lovely inquiry I got on VBRO today… got a good laugh.
due to the unsecured use of credit card or other online payment, we will arrange for payment inform of US cashier check or bank certified check, So Kindly get back to me with mailing information below
Name, Address, phone number and total amount.

Seriously… I’m so fed up with TA right now I can’t see straight. The guest who booked with us 5 days ago wrote in last night to ask if it was a shared lodging or if they’d have the whole place to themselves.

Here’s what our listing says about that in the 3rd sentence, so not exactly buried under a bunch of copy:

“This is a ‘shared’ apartment and we rent out a total of two guestrooms, so there may be another guest in the other guestroom while you’re here. We work diligently though to make sure guests are quiet, respectful and considerate of each other.”

So I wrote him back to inform him of this and he wrote back and said, “Many thanks for the information but I will cancel the booking, and look for something else.”

And many thanks a lot to you too Jose! For wasting nearly a week of prime time for getting bookings for next month.

That now makes for 12 inquiries (in 11 months!) and NO BOOKINGS, but a lot of wasted time and hassle.

How many reviews do you have on TA? As I mentioned, I had constant issues too, with the wrong kind of guest until i got a few reviews up.

But yeah, at this point it may be better to de list…

If you hate them and are fed up with them, then don’t list with them, would seem the obvious conclusion

I agree, but you never know when they might come in handy and you might need them.

I had a lot of success with TA. Once they book you can click there name. Revealing there Phone and email. I collect a cash security deposit on all TA bookings. If they don’t like it they can cancel. The renter pays the fees not us. Don’t bother paying for a ad because they pay. There cancelation policy has a lot to be desired. They charge us the owners and I forget the amount $150-$200 if I screw up. Second if Client does a charge back I’m on the hook not like Airbnb. 3rd. If they cancel due to weather. I’m left empty with no money. Even though we warn people to please purchase $39 dollar travel insurance that airline sell. So trip disruptions are covered. If you had up our Expedia bookings. Trip advisor. Home away. Wimdu. And booking.com. All of them. Together still don’t equal Airbnb. But it’s nice to have a back up. I’m having issues with icalc formulas workin alll the time. They seem to break or fail after a few months.

Is this a part of their policy? If guest is having bad weather in their area, then they can cancel even if it’s sunshine in my area?

Yup. This was one of the changes made in the new TOS that we agreed to in December 2016.

Extenuating circumstances. Hurricanes, servere snow storms. They canceled out my reservation and told me I wasn’t going to be paid. 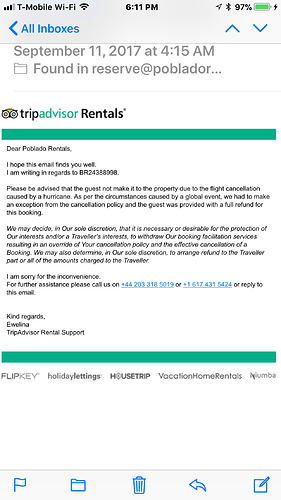 hey jon there old model was the host pays, then they switched. I was going to pay to list with them but the greedy company told me either I pay to list all or nothing. So i did nothing. Then about 2 years ago they copied airbnb 3% and 14.5%

Hmm… okay. Well, I guess it’s the way they show the total the guest pays so prominently that makes it feel like they’re taking it out of our pay. Anyway, I guess it’s all the same either way.

On that letter about the weather-related cancellation - I’m pretty sure Air would do exactly the same thing. They did that to us once when somebody was coming from somewhere and there was either a bunch of flight cancellations there or there was a big snow storm here - I don’t remember. But they told me since it was such a “horiffic” event they were overriding our cancellation policy and allowing the guest to cancel. It hurt, but I didn’t really disagree with them. There was no way the guest could have gotten here that time.