Why do guest star ratings not show

Hi, I dont understand why guest star rating dont show. What’s the point in rating them on cleanliness, communication etc if its not going to show on their profile? It all seems pointless. Ive give feedback to airbnb about this, so hopefully it wlil change in the near future. If guests star ratings show then a host can make a good decision on whether or not to have them stay, just like they do with a host…

I don’t think AirBNB wants us to start rejecting guests so they are not disclosing all the information that they have on guest behavior. It’s pretty fn ridiculous.

I had this same convo with my partner today. What is the point in even scoring them when other hosts will never see it?!

What happens to this information anyway? do guests get an email from Air saying they need to be more tidy etc ??

It’s the same on either side.

I would suspect airbnb uses it as a data aggregate for an average and median opinion of guests and hosts.

If they have an issue that comes up often, that data will confirm/deny.

It’s also possible just rating people makes us feel better, and it serves no other purpose!

Determining “fair” with an absolute minefield of preferences, hosting and guest styles would just be a nightmare.

One host thinks you’re an amazing guest, the next one dings you for cleanliness because you don’t jif the toilet despite a cleaning fee- is it fair non clearly communicated expectations prevent me from booking a great place, from a great host?

One guest thinks your place is awesome for the money, another thinks they’re being ripped off…on features, not on money- is it fair to lose a potentially great guest due to a bitter idiot whose upset there isn’t a weeks worth of TP despite staying only a night?

Anyway, guests don’t get an overvuew of star ratings either, so I guess at least it’s fair?

hi justshoot – I’ve been a guest several times and I always see the star category breakdown when I’m searching for properties. It shows up whenever I click on an individual property. You’ve probably just never noticed it because you don’t care that much about the ratings… I do agree that most guests focus on the overall rating that shows up under your listing and not much else.

I never even noticed.

I apologize everyone, I am entirely in the wrong here.
Member since 2012 and regular user since 2013, and I never even spotted it.

I will say, though, having trawled back through the star ratings on all of my bookings (once you know, you can’t unknow, lol!) the hosts I had issues with were all 5 star.

@JustShootMen - yes you can see the star rating for the hosts on their property page it is above the reviews. mine: 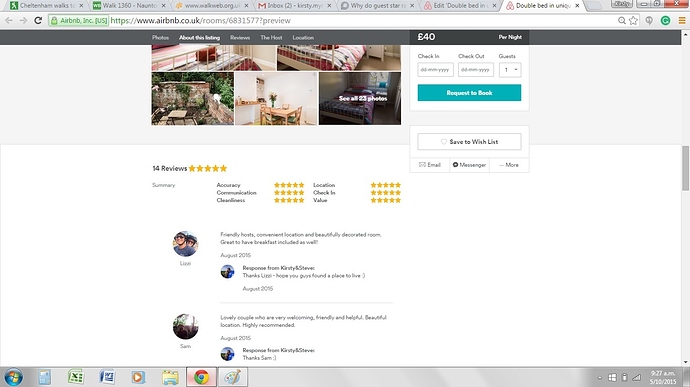 I am new to this and just had my first guest. He gave me very good ratings but on my advert the star rating does not show up at all.
Furthermore, it says on my “Stats page” that I have had no ratings, even though I can actually see that my guest did rate me five stars for every one of the topics.
Can someone explain to me how this works?

It doesn’t show yet because not enough people have stayed with you. Once you get to around 5 guests your star rating will show.

P.S. Better to start your own thread than necro a thread over a year old