On FB STR groups there’s been a recurring buzz about chargebacks via VRBO.

The most recent: mature couple booked for 10 days, complained of extensive bed bug bites after night 1 but refused to leave after refund given & refused to allow bug inspection & treatment. Then complained about scabies after checkout. So trip refunded through VRBO, & they stayed. For full trip so now free vacation.

I’m starting to like “pay everything through Airbnb much more…”

There are threads here dating back to 2016 about VRBO chargebacks. Looks like it’s still a problem.

Oh, “scabies” must be the new blog-recommended claim to get a refund. Just read one on the CC- Airbnb host whose unit hadn’t had a guest in it for over 2 weeks, and the only person in there was him and his wife, to clean and prepare it the day before, had a guest show him bites and pustules on her face she claimed her doctor told her was scabies.

Scabies don’t live for 2 weeks without a body to feed off, they are primarily transferred through prolonged skin to skin contact (had to deal with them a few times when my kids were young, after a sleepover) and they don’t bite- they burrow under the skin. And they don’t go on people’s faces- they prefer warm areas like the back of the knees and armpits.

I did a google search and it says that In general, scabies mites can live for 2 to 3 days on a mattress and other inanimate items. You can remove them from these objects with a vacuum or kill them with a steam cleaner’s high-temperature steam. 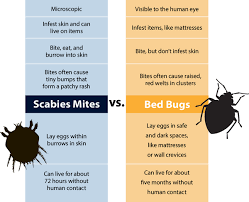 had a guest show him bites and pustules on her face she claimed her doctor told her was scabies.

More about this bedbugs-the exterminator said bed bugs are very prolific. You never find just 1 & dead. He felt there was not an investation.

The host posted the guest’s picture of the extensive “bites” on back.
The wounds did not look like the classic bedbug 3 bites in a row. I’m not a doctor so I can’t diagnose- the picture looked like a picture found on the internet of dermatitis.

So they brought a dead bed bug & perpetrated a ruse to get a free vacation and get a second refund. The host ended up not only returning the original booking revenue but getting hit for an additional amount.

This one combined with another one where a guest left plastic roaches between the mattresses & box springs, & furniture cushions, in cabinets, etc. has me concerned about “what is the next scam”

It didn’t get to the point of the guests reporting the host, or demanding a refund, but they were obviously working up to it - the host got the exterminator out right away who found nothing.

Hey @JJD, do we need to compose another song?!?

And I won’t lie. Even 1 bedbug, dead or alive would freak me out as a host or a guest. Is that not a sign there are likely more?

do we need to compose another song?!?

Omg. I just got that song out of my head like two weeks ago and now…it’s back.

Is that not a sign there are likely more?

Usually but not this time….plus this time what the guests presented as bed bug bites were clearly not.

the exterminator said bed bugs are very prolific. You never find just 1 & dead. He felt there was not an investation.

This one combined with another one where a guest left plastic roaches between the mattresses & box springs, & furniture cushions, in cabinets, etc. has me concerned about “what is the next scam”

Well, the next time I’m booking an AirBnB in Seattle, I’ll head for Archie McPhee’s before checking in! You never know when you’ll need an infestation of Racing Roaches. Pull back on one, release it, and watch it tear off at top speed like someone just turned on a light. Hold cockroach races or scare a family member, these 3-1/2" soft vinyl and plastic...

One great thing about having young grandnephews in Seattle is that I get to spoil them every year or two by taking them there and handing them each $10. And then we stop at the conveniently located artisan ice cream shop next door. I love being the crazy uncle that takes them to weird places.

When their mothers lived in a tiny Alaskan fishing village with a weekly mail delivery by float plane, I would send them gift certificates and the catalog Archie published in those days. My sister said they would spend hours deciding what to order.

young grandnephews in Seattle is that I get to spoil them

Yes we are supposed to spoil all grands. I can see the racing roaches being great entertainment.

Now these are not: 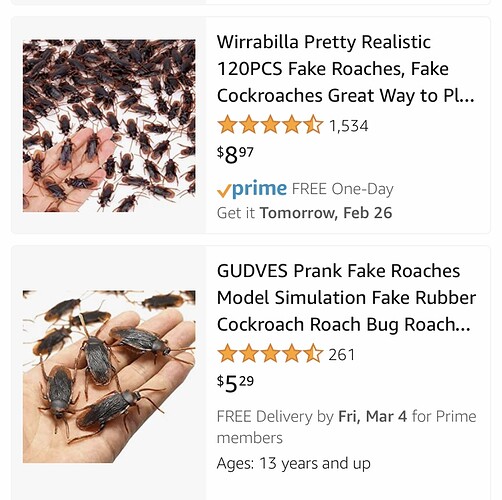 If you look at Archie’s catalog they have those, and plastic ants in bulk. Back in the 70s the realistic rubber doggie “sausage” was popular, along with other fake hazards.

He just came back with an update. I had been mistaken when I said he had already gotten an exterminator out.

The guest who had told him her doctor said it was scabies has now called Airbnb to tell them he has a bedbug infestation.

I imagine there will soon be another update.

has now called Airbnb to tell them he has a bedbug infestation.

he has a bedbug infestation.

This is just making me want to scream. People claim bedbugs & folks go bonkers when the wounds will tell the story. A bed bug snacks, takes a couple side steps feeds, takes a couple sidesteps & dines a 3rd & final time. Of course if there is a massive infestation it is hard to see the pattern.

Sigh. I’m so blessed I’ve not had much of this kind of stuff.

Photos in case a guest ever sends you a picture. 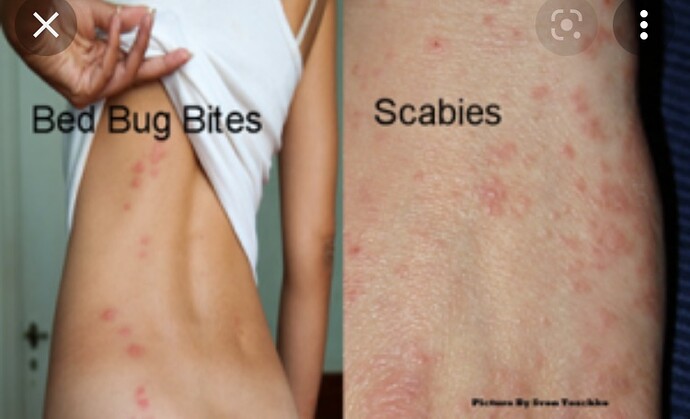 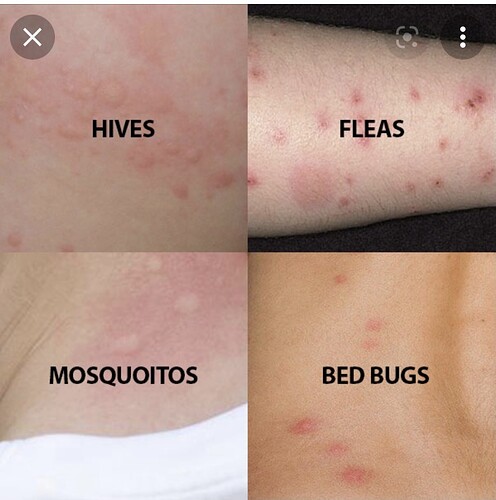 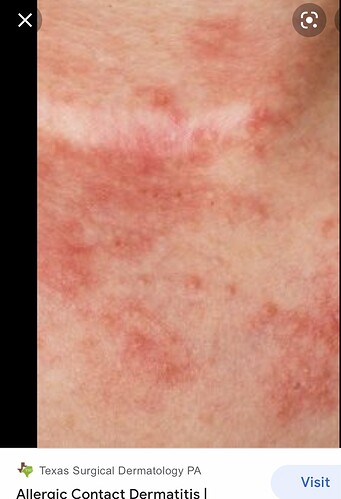 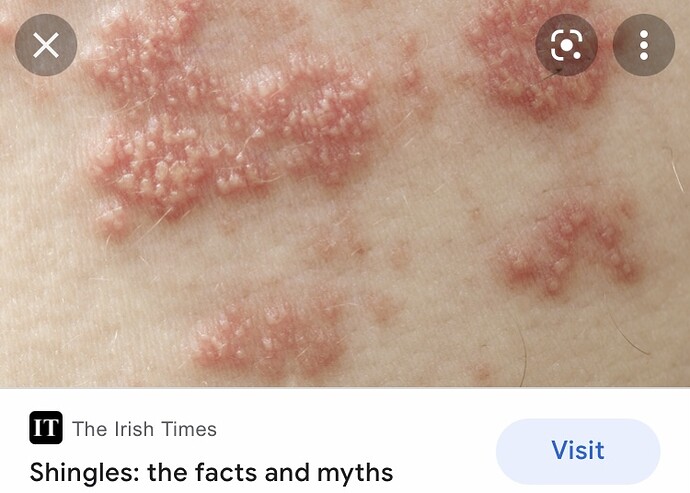 And various people react differently. I must have some immunity to mosquito bites, because there are plenty where I live, and I have seen them on myself, biting me, but they never itch or swell up. However, that lack of allergic reaction didn’t prevent me from contracting dengue many years ago.

And the teeny ticks we have here look like the photo of the bed bug bites- they move an inch over and dig in again. Their bites continue to itch like crazy for a week after you find the tick and remove it.