Anybody else in the UK receiving text messages from a number purportedly from Airbnb providing a verification code?

I am in the US and have had this happen 3 times in the last two weeks.

Do you think the texts have actually come from Airbnb?

I don’t think I’ve ever had a text from Airbnb. Ever.

They aren’t text messages, @jaquo, they are verification codes.

And anyone who has text turned on in their profile gets text alerts from Airbnb.

But what the OP is referring to aren’t alerts, they are codes which Airbnb sometimes sebds when you are trying to log in-it’s a security check.

However, in this case, tons of hosts have been getting these, several a day. It’s a glitch if some sort or a security breach and Airbnb is aware if it and supposedly working on it.

I’ve been getting them almost every day, and now they are in Chinese.

I have put a problem ticket into CS, who say it is an ongoing known problem. They asked me to include the message in my report. My response to them:

"You want me to include the code that AirBNB tells me that its employees will never ask for ? " 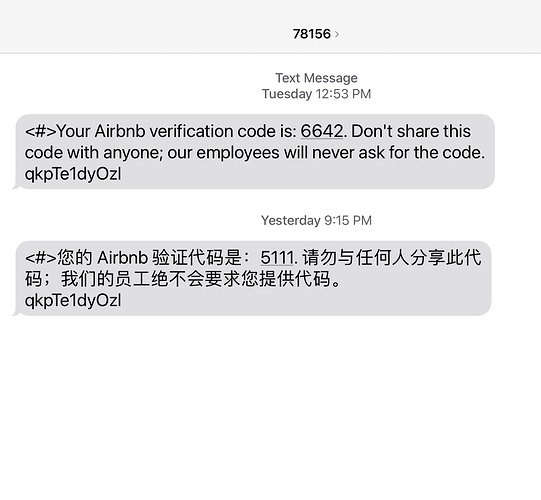 If you look on the Airbnb community center you’ll see this has been a reported issue for over 2 years.

Or, it could be someone trying to log into YOUR Airbnb account, but since your phone is the one on the account, it’s sending the verification code to you.

" You want me to include the code that AirBNB tells me that its employees will never ask for ? "

You did not actually give it to them right?

When logging into my Airbnb account via phone number

I get a verification code

If I weren’t trying to log in & received a code, I would be concerned someone was trying to hack my account, however without the code, they can’t log in. The code expires in 5-10 minutes.

So Airbnb is saying the random code generation is a glitch?

Two different things. I have also gotten that verification code if I click on the phone number to log in. (I normally log in with email, which doesn’t generate the code request) This is legit.

The glitch is different. Hosts have been receiving these several times a day when they haven’t been trying to log in or do anything on the site.

Hosts have been receiving these several times a day when they haven’t been trying to log in or do anything on the site.

If I weren’t trying to log in & received a code, I would be concerned someone was trying to hack my account,

Airbnb had security breaches not long ago. My ID theft service advised me to change the passwords on 6 different accounts including Airbnb.

My trust level is low. I’m thinking bad guys have a phone number generator And they are looking to access an account. Airbnb may be passing it off as a glitch instead of saying thieves want into your account

My trust level is low

Mine too. Time to change up the password just because

Ah, I misunderstood. As far as I’m aware they are saying it’s a glitch that they are working on, but it seems to me that if that were so, they would have been able to correct it by now. So I suspect it’s a security breach or an issue with whatever entity sends out those codes but they simply won’t admit it.