I’m in Texas but in far west TX with a different power grid that the central part of TX. We were also on the edge of the storm and so had warmer average temps than much of the state. El Paso is generally not prone to typical disasters but increasing extremes from climate change make everyone vulnerable. But the time to start thinking about disaster prep is when everything is fine, not on the eve of the disaster.

I’m thinking that if I were in Central TX and I knew this storm was coming I would stock up on non perishable food and potable water, gas up the car, make sure all batteries and portable electronics are charged up. Have the stuff to make hot drinks with just water. In hindsight it appears that filling the bathtubs and any other water containers available would be wise. Perhaps turning off the main water supply if possible. Dig a pit toilet in the yard before the ground freezes.

Have a supply of firewood every winter if you have a way to burn it.
Have a generous supply of drinking water at all times. I always have multiple gallons.
Always keep your gas tank full and some cash on hand.
Buy some solar chargers.
Don’t forget you need pet food and water for pets if you have them.
Buy a generator of some kind if you can afford it but keep in mind gas powered ones need gas. Remember no fossil fuel burning device can be running inside.
A propane camp stove or burner (like for seafood boils) or grill to at least heat water.
Have a water filtration system, even a camping style water filter on hand.

I’m sure that many of you are better preppers for disaster than I am. What can be added to the list that makes sense for a homeowner who needs to shelter in place?

What can be added to the list that makes sense for a homeowner who needs to shelter in place?

Beer. Lots of it.

While I do love beer I don’t know that I’d be consuming copious amounts in an emergency. Also for the females the need to constantly pee is a bigger problem than for the males.

But speaking of females, having a supply of sanitary products is a must. I’m past that age now so forgot.

I don’t know what you call them, but a supply of those warmer packs you bend to activate that you can stick in your mitts or socks to warm you up.

Beer. Lots of it.

John is right about this. I am keeping up with a lot of friends and family in Texas and potentially running out of beer and booze seems to be the number one concern across the board

And this is from folks who have been sleeping in cars who have had no utilities (no water, no electric, no natural gas) for 48 hours+ now. These are my people. They have their priorities straight

edit to add: These are the other things on their wishlists: water, propane, fuses for vans/RVs, coffee, wool socks, hats and firewood. Oh, oddly, the first time I’ve ever heard this from a Texan, “snow shovel”.

a supply of those warmer packs you bend to activate that you can stick in your mitts or socks to warm you up.

Yeah! I actually sent a big pack of 60 of those to some friends in their Christmas gifts. They live in the country and he leaves for work before dark so I thought they’d be nice for using the cold steering wheel in the winter. I talked to them this morning and he said, “you know, when you sent me those, I thought we’d never use them all, but now we have 5 left”.

There are also rechargeable ones that charge on USB so they wouldn’t take a lot of power. I have a heated vest that operates on a portable rechargeable battery. I bought it for socializing outdoors this winter and it’s been worth every penny.

potentially running out of beer and booze

It’s great for barter with neighbors as well. I read on twitter of one person trading a pint of whiskey for some coffee. Instant coffee lasts a long time and can be made more easily than brewed coffee.

One of these only pulls 300 watts.

rechargeable ones that charge on USB

I think what I am learning from folks is to have stuff that doesn’t need any power other than battery or propane.

The other wishlist item also includes “more stuff that can go on the fire”. I guess those Keurig machines don’t make good coffee on a fire

I think the answer is “camping stuff”, that seems to be what people need right now.

is to have stuff that doesn’t need any power other than battery or propane.

Ensuring your state does not have the same terrible governor and representatives / senators as Texas so proudly elected.

While I do love beer I don’t know that I’d be consuming copious amounts in an emergency.

I’ll bet you would.

At the beginning of our hard lock down I was actually in the UK, but made it back within a day or so. My OH had did a sterling job stocking up with various stuff, but she’d not got as far as the beer.

Luckily, we had no shortages in supply, but just in case over the next week or so we stocked up, well!

I’m waiting for Home Battery systems (such as Tesla PowerWall) to come down a little in price and/or some state tax incentives to be implemented. Unless AZ learns from this Texas failure, nothing will happen until a new governor and state senate move away from the energy lobbies’ control of them.

I fear a TX sized failure for AZ in the middle of summer. Last time that happened I took the dog and camped in my Tesla w/ its AC and satellite radio. 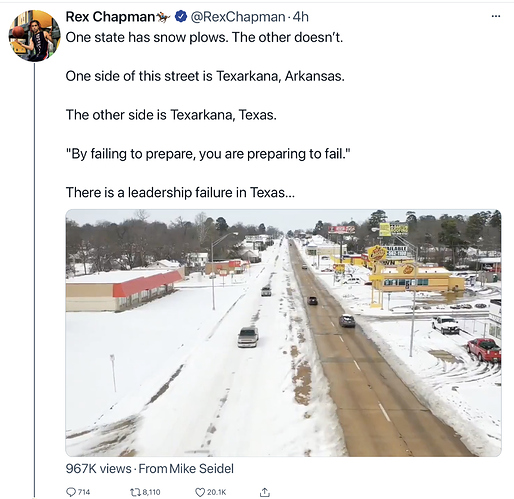 Our location (Hawaii) and the fact that virtually everything is shipped/flown in, we try to be ‘disaster prepared’ at all times.

The two critical items at the top of the list are rice and TOILET PAPER, followed by butane cartridges for the one burner stove.

All good suggestions and I have few to add. Make sure that you have your medications as far in advance as allowed. If you stock food and hand/foot warmers be sure to have a system to rotate them so that you don’t open them in a disaster and find them all expired. Yes, even the hand warmers expire. Most importantly have a plan for your family. How will you check in? Often you can reach an out of state relative or friend more easily than local. Get someone like that to agree to be your contact. Have a hard copy of key phone numbers. After a disaster talk with your family about what needs to change for next time. When you’ve perfected your shelter in place plan, develop your plan for needing to leave in a hurry - people, pets, papers, supplies.

We’ve been through several power failures (one lasted nine days), but fortunately not during extreme temperatures. We don’t have a generator.

A lifesaver for us was having a full tank of gas in both cars and using an inverter to get power from a car idling in our garage (garage door OPEN) to charge phones and computers in the house. We had a business to run during those outages, and we were able to keep working.

An inverter takes low voltage direct current and converts it through a process called inversion into the proper voltage of alternating current to run equipment that takes 120-volt power. The inverter was connected to a long heavy-duty extension cord that snaked in under the door and then a power bar in the house. It wasn’t enough amperage to power the refrigerator, but it ran some lights and electronics. It was enough for us to keep our business going.

Each day, a car was idling in our open garage for hours, and it hardly used any gas.

I wouldn’t suggest this for a guest, but it’s good preparedness for a host. 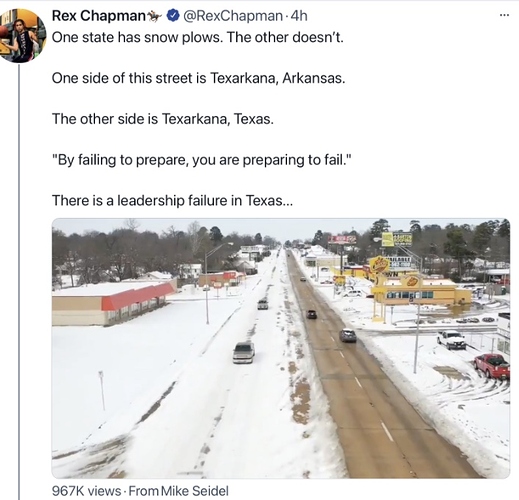 There are so many things wrong about this photo and its comments.

What can be added to the list that makes sense for a homeowner who needs to shelter in place?

A generator. If you already have a propane appliance get a propane generator and a big tank, and keep it topped off regularly. Get one that’s wired in and starts automatically if you’re not home. Change your wiring so that important stuff is on separate circuits that will stay on when generator fires up.

I’ll be installing heat pumps soon, and part of the installation include a generator. I’ll want propane for the cooking top when I remodel the kitchen anyway.

The generator, like all electrical in the house, will be monitored by my smart-home-in-progress system.

I’ve heard that this can be done but never talked to anyone who did it successfully. I have a Prius and definitely need to do this. Have you run anything bigger like a small electric space heater or dorm sized fridge?

I’m in Austin and have been so grateful that my parents are visiting, so no official guests! We were prepared for the snow, but not for the power outage. Looking into generators (and now interters!) for the future. The propane grill has been a lifesaver, but if we could just keep the heat and hot water going, we’d be set - I say the most important things are heating/cooling, cooking, and device charging.

I have a small inexpensive solar charger panel that just has a usb that is perfect for that. In a place like El Paso or Austin where sunshine is likely even in freezing weather it could come in handy.