This is a question from Europe (Germany), but hosts in other parts of the world are invited to share their experiences.

Airbnb is really making headway in Germany. I’ve been renting out rooms in my apartment for more than 5 years now, and I regularly get newbie guests, i.e. those that never used Airbnb before. The market is really getting mature now.

For some reason, not all Airbnb hosts seem to be very keen on stating the Airbnb income, in their tax returns. Therefore, the German Ministry of Finance seems to have sent an official request to Airbnb Europe (located in Ireland) for Airbnb to provide the names and full addresses of German hosts, in order to check that all of them duly declared their Airbnb earnings in the annual tax return.

I am not a lawyer, and I don’t know if Airbnb will comply with this request. However, I believe it is fair that all Airbnb hosts are treated equally, and tax dodgers are caught.

As you will know the reason people don’t declare their income is because they are what we call ‘tax dodgers’, who want to avoid paying tax on the income they generate.

In the UK we have a law that if you share your home you can earn up to £7000 or so, before you need to declare your income for tax. This was designed to encourage people to take in lodgers, so I think they are going to close this loophole.

I don’t know about the legalities of Airbnb provide information on hosts, but I think they might do something similar in the U,S.

In the UK we have a law that if you share your home you can earn up to £7000 or so, before you need to declare your income for tax.

We have a similar law in Germany, only the threshold used to be DM 1,000 and it was duly adapted to € 500 when the Euro was introduced, back in 2002. This figure never changed ever since. Clearly, Airbnb was not in the mind of people who made this law.

The city government in Naples, Florida, near where I live is trying to get Air to divulge names/addresses for the same purpose. Air is vehemently defending hosts privacy here, and I’m sure over there as well. They have flatly told the local government that they will never give up host identities.

This is a question from Europe

Sorry, I didn’t see a question.

@KenH - I’m a little confused as to why AirBnB is “vehemently defending hosts privacy”. Does Uber withhold the identity of their drivers? Or Amazon protect the identity of their Marketplace suppliers? How are we different from those groups? Naples’ government could hire a person to go through the AirBnB listings and get most of the the information, anyway.

I’m not trying to be argumentative, just wondering why AirBnB is fighting this.

Here in Florida, Air pays our taxes for us. The implication is that Air is lying to the gov’t, and not giving them enough money.

How are we different? We work with AirBnb, not Uber or Amazon. Our “contract” is different concerning what Air will do with our information.

@KenH - Thank you for clarifying. I did not realize that Air paid the taxes on your behalf. Now it makes sense - AirBnB is protecting themselves.

Here in Florida, Air pays our taxes for us.

Thank you for giving this example. In Europe, this answer wouldn’t make any sense, and I am a little surprised that things seem to be different in the US.

Income tax is charged on a personal level. Thus, for example, consider hosts Adam and Betty both earning $ 10,000 from renting out their homes on Airbnb. Now if Adam earned $ 40,000 from another job, and Betty earned just $ 5,000 from her other job, the extra tax they would have to pay on the $ 10,000 Airbnb income would be vastly different. Therefore, Airbnb couldn’t possibly pay the taxes for Adam and Betty.

The bottom line is, I don’t see any alternative to Airbnb disclosing hosts’ full identity to the Government tax office. I want to find out if I might be wrong.

@Eberhard_Blocher - I believe @KenH means that AirBnB pays the lodging and other taxes that are specific to a rental property, but NOT the income tax.

Your income tax example for Adam and Betty is valid in the US, too.

Yes, the Rent a Room Scheme allows you to earn up to £7,500 tax-free per year from renting out furnished accomodation in your home. If it’s rented from joint owners, the tax allowance is halved to £3,750 each.

There are a couple of consultations I’ve seen about the ‘sharing economy’ and housing supply. These seem less targeted at those sharing a home they live in and focus on whole houses being removed from the long term rental market. I’m hoping this means the allowance stays in some form. It survived the last government budget.

You are so right – we are not different to any other business. But AirBNB is STRENUOUSLY trying to change the rules of the road … for reasons we can only speculate about.

And while Air’s “host privacy” emphasis may have started as a well-intentioned effort to keep homesharers from getting stalked by crazy potential guests, AirBNB’s “privacy” claims now allow con artists great leeway to do most anything with AirBNB accounts and listings (money laundering, review rigging, loan fraud, excessive occupancy numbers in residential zoning, etc etc etc.) Hosts essentially operate in the shadows and either manipulate this advantage or play it straight.

The final area where the Airbnb agreements [the voluntary collection agreements that Air enters into with various cities and states] will undermine the rule of law is regarding local land use, zoning, housing, occupancy and building safety laws. As described earlier, the Airbnb agreements that create shield of secrecy for lodging operators will effectively allow and enable the growth of illegal hotels to operate in traditional residential areas. Is it possible that the goal is to undermine compliance with local land use and housing laws enough to change the reality on the ground to sufficiently that if laws are enacted to stop the conversions to commercial lodging, those laws will “grandfather” in place the illegal hotels? If that occurs, change would have occurred improperly at the expense of the rule of law with those who violated the law getting rewarded.

Actually there is a consultation going on at the moment about changing the rent a room scheme to make it taxable (because of it being used for STRs rather than the original purposes to free up accommodation for long term renters).

It’s now closed. We shall wait and see. Airbnb will have no doubt put in a detailed response, they always do.

The law in the United States is amount of time, not amount of money - at least for an entire home (I have not looked at it from the perspective of a portion of your home). You can rent out your entire home for up to 14 days and not pay any taxes on the rent you receive. It’s sometimes called the “Master’s rule” because people would rent out their home for the U. S. Master’s tournament (golf).

Yep. Didn’t know it has closed. I responded to it about three months ago.

Airbnb is NOT paying our taxes. We also we’re under the impression they were, but found out the hard way after an audit. We feel scammed. I was wondering what they did with all the money they were collecting from guests and calling it taxes.

Last I checked- if you have under 200 transactions or under $20k in air income in the US- they send out 1099 tax worksheets as well as report it to the IRS . 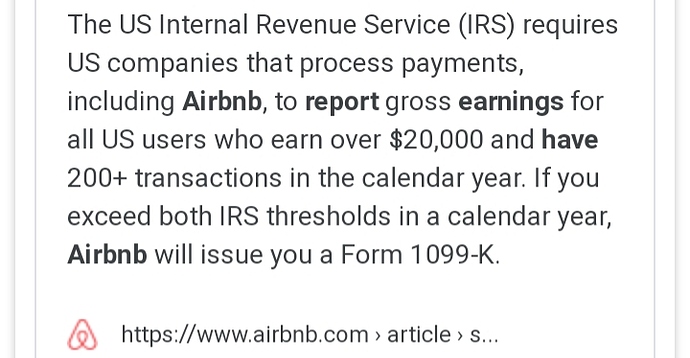