am i right that if ur a superhost and 1 guest leaves a bad review that u still keep your status (well if it keeps you 80% of 5 star reviews). those 80% have to be for the year?..maybe i missed it on some older posts sorry. …just asking )

1 bad review or 2 or more doesn’t matter. It’s the percentage that matters but the standard changed April first. Now you need to average 4.8 stars rather than a percentage so they’ve increased the standard. 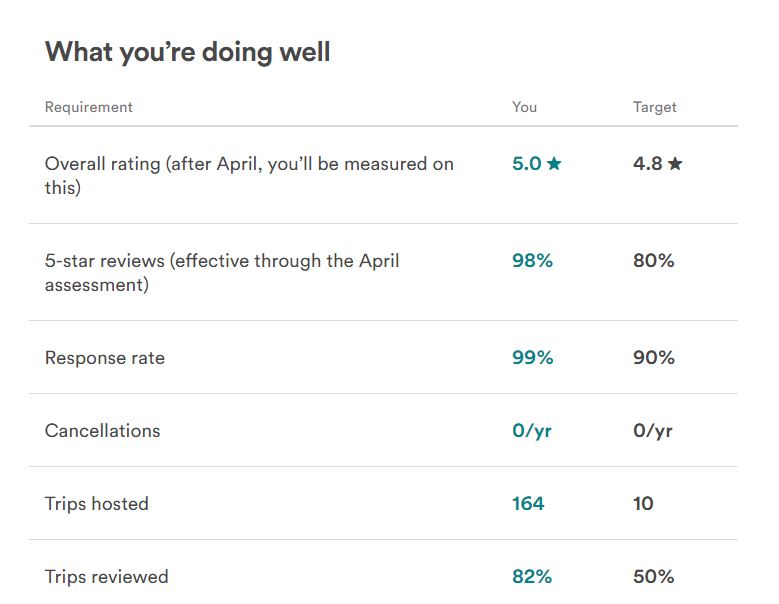 Yep, they are looking to significantly reduce the numbers.

At the moment if a guest gives you a 4,3,2 or 1 it doesn’t matter which of those they score you to the % of 5s so you need 4x5s to make up for it to keep it at 80%. But if in future they take the average then while the number of 5s you need to make up for a score of 4 is still 4 it is 9 x 5s for a 3, 14x5s for a 2 and 19x5s for a 1. As a host there is now a lot more incentive to ring up and argue against a low score particularly if it is a spiteful 1 or 2. I’ve always thought that they should let you lose your 2 or 3 lowest score/s on the basis that everyone gets a really bad guest or has a really bad day once a year or so.

As a host there is now a lot more incentive to ring up and argue against a low score particularly if it is a spiteful 1 or 2.

There is also more incentive for those messages “explaining” the rating system and begging for 5s and even extortion in both directions. This may be one of those things Airbnb hasn’t adequately thought through.

Yes they are raising the bar significantly. And I think part of the problem is they made it so easy for so long and now they are tightening up. They are going to have a lot of whining former SHs. Forget calling in for help with a real problem they will be busy with hosts calling about 4* reviews.

I have mixed feelings about it. OTOH I think it does need to be tighter, as I like to say, if everyone is special, no one is. I think they could have added Plus, and raised the bar a little on SH, to say 90% People are familiar with 90% being an A, the “top score” on a 5 point scale. OTOH, as you say everyone gets the occasional psycho guest. If you are just starting or don’t get many reviews on Airbnb because you rent for longer periods or use multiple platforms it could take a long time to recover from a pair of poor reviews.

I was always confused by the “Trips reviewed”. Is that us doing reviews of guests? If so, I think mine is 85% but I always review. It should be 100%. If it’s the guest reviews of us, that’s totally out of our control.

Is that us doing reviews of guests?

I think it is only because I read a post recently on the Airbnb community forum where the host said he lost SH because he didn’t review 50% of his guests. But I, too, remain confused due to mine saying I reviewed 82%. I swear I review more than that. Maybe not 100% but more than 82. It is maddening that they have requirements that they aren’t clear about.

oh…so if we dont review guests thats a mark down?

so if we dont review guests thats a mark down?

requirements that they aren’t clear about.

After 5 years on Airbnb, we received our first bad review. It was 3 stars but didn’t affect our Superhost status, still got the bonus. We’ve had a couple/few 4 stars as well. Not sure I’d call that “bad”.

And when I say the 3 star review was bad, it was the review itself which was about a page long. So disheartening. I wonder how that will affect bookings going forward. Can’t wait til more people from the US review us so that this review disappears. 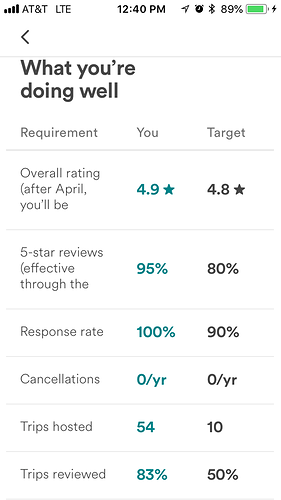 That’s what I’m saying! I review everyone and I’m at 85%. But why should we be penalized if guests don’t do a review of us? We can’t control that! So you could lose your SH status if less than 50% of guests don’t do a review even though you hit every other target? If that’s true then that’s not fair. I’m still not sure that’s not our % of reviews we do of guests and somehow it doesn’t count them all.

I’m still not sure that’s not our % of reviews we do of guests and somehow it doesn’t count them all.

It is the number of reviews that you have received as a percentage. Why would you think otherwise?

Why would you think otherwise?

because it says “Trips reviewed” under the “You” column. I find it confusing. It could mean how many trips you reviewed. And how can we control whether a guest reviews us or not?

And how can we control whether a guest reviews us or not?

I believe the theory is that outstanding and miserable stays will be reviewed. Clearly this was designed before AirBNB moved from being a community to a full-blown, lots-of-rules, less-host-friendly business.

We keep our own data and the amount of reviews that we have received from guests is 80% according to our spreadsheet. So, Air is almost correct

Also only 62% write in the guest book.

Now you need to average 4.8 stars rather than a percentage so they’ve increased the standard.

They also require a 4.7 as a basic standard from all hosts. I think they’ll bump superhost status to 4.9 in the near future.

I was browsing this forum on the subject “Trips reviewed,” and found this thread. I’m wondering if anyone else is seeing a decline in the rate of reviews they’re getting. We’re down to 71% which is creeping closer the 50% minimum. Many of guests are return guests, and they don’t always leave a second or third or sometimes fourth review, and I think this affecting the rating.

Has anyone else dealt with this? Is the rating cumulative or reviewed quarterly?

Many of guests are return guests, and they don’t always leave a second or third or sometimes fourth review,

My rate is not declining and my repeats are reviewing at a rate equal to new guests. If I were you I’d ask repeat guests that you trust to book direct.

What do you mean by “book direct”? You mean offline so they don’t need to leave reviews? I’ve done that with a few, so i just have to block a bunch dates on my calendar, which has presented some of its own challenges.

Yes, they pay you directly and save a little money on airbnb fees. I’ve done this with some repeats but only ones I trust. For example last year a nursining student wanted to book 10 3 day stays over the summer. She booked the first three on Airbnb and I blocked her remaining days on the calendar. Then after she had stayed twice and I’d met her and talked with her I asked if she would like to pay directly and she did. I worked out great for me but it’s not an offer I would make to every guest.

i just have to block a bunch dates on my calendar, which has presented some of its own challenges.