I know that a lot of people over in Europe use Saniflow toilet systems and we have one installed in our Airbnb guest house.

Basically when you flush the toilet, it sends it through the wall behind the toilet and into a box that grinds it up like a garbage disposal, and then shoots it up through the ceiling, across the building, and down into the septic system.

Our biggest fear is guests flushing things that don’t belong down into the toilet. We have been told that it will even grind up female products, but that its not recommended to flush anything other than toilet paper.

We want to get a small, wooden custom sign to hang above the toilet, but have no idea what to write on it so that guests make sure not to flush anything that could damage the system. We don’t mind it being a little funny, but I figured I would ask what all your advice is before we order something ??

We’re on septic and my sign basically says “septic systems don’t like anything going in them that didn’t come out of you, please dispose of blah blah blah in the waste container beside the toilet”. I also ask people to inform me if they’ve mistakenly done so. Whether they actually will or not is another matter, but it doesn’t hurt to ask. I leave small brown lunch bags folded up in a basket on the back of the toilet for anything they want to dispose of that might be embarrassing to them. Makes taking the garbage out a little easier on me as well.

I hadn’t though about leaving some paper bags so they can dispose of things without just tossing them in the bid. Very good advice! Thanks

We don’t have that kind of toalet for our Airbnb guest, but for students coming to my design and sewing classes. We have a huge wall sticker just behind the toalet saying (in Norwegian) " I am a Saniflow toalett - if you feed me with anything else then paper i get broken. It has worked well so far. A small wooden plate looks of course more descreet, but I would be afraid that people don’t read it.

The wall sticker looks like a comic bubble. It’s the toalet speaking… 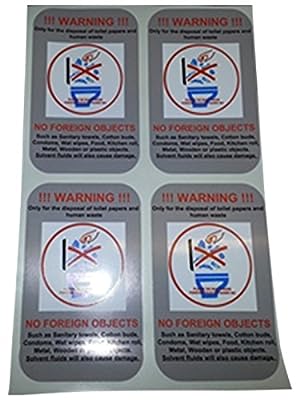 MACERATOR WARNING SIGN 4 STICKERS ! Suitable for all macerator units. To display when a macerator pump is installed. Self adhesive set of 4 warning sign stickers. Ideal to stick underneath the toilet ...

I just used a label maker for my toilet lid - top and bottom - that says Toilet Paper Only. Black letters on a clear background. Seems to do the job with minimal fuss.

I have a sign saying no wet wipes either as people seem to think they’re ok. Not helped by manufacturers who say their moist toilet paper is flushable!