Replying to a negative review: an example

It’s sweltering and dry as a bone in the Catskill Mountains and before I retreat into a stupor for the rest of the day I thought I would share something.

The current guest in my vintage travel trailer has exceptional reviews - 5 star average over 19 reviews, which is impressive. One host, however, gave her a negative review and her response was so masterful, so adult and compassionate and honest it almost shines above the positive reviews.

I think there is a lot to learn from this example. Would this tack work in all situations? No, I assume not. But I think being the bigger person - whether you’re a host or guest - often shines through.

Before she leaves I want to tell her how impressed I was by it. 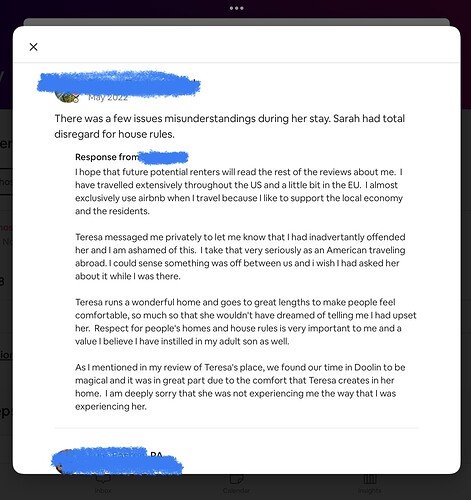 That is so awesome. Thank you for posting it!

That is “heaping firey coals on their head” level stuff.

If you get the chance to ask if she has any idea what the issue was, I’d love to know.

“So much so that she wouldn’t have dreamed of telling me I had upset her” is next level. Kudos to her for getting that in there – it’s almost like an “if you know you know” nod – while keeping the rest of the reply humble and gracious.

Yes, great reply. While I can understand that guests or hosts might offend each other due to some misunderstanding or cultural difference, it’s hard to believe that this woman had “total disregard for house rules”.
Now I am so curious as to what the issue was.

A friend of mine booked a homeshare somewhere in Scotland. She lives in Canada, but she was born and raised in Scotland, so there couldn’t have been any misunderstanding as to cultural norms. Shortly after she checked in and got settled in her room, she was walking through the house to the front door, and as she passed the living room, where the host was sitting watching the telly, she took a couple steps into the room and asked the woman, just making friendly conversation, what she was watching, as it looked interesting. The host turned to her and said frostily, “The living room is off-limits for guests” and turned back to her program. My friend was of course taken aback.
The woman was extremely chilly towards her for the rest of her few day stay, so my friend stayed away from the house as much as possible.

Then she said the oddest thing was that the host suddenly became sweet and friendly towards her the afternoon before check-out morning. Either the host was thinking she’d better be nice or she’d get a bad review, or she was bipolar.

@muddy Oh, I experienced something similar with a Scottish girlfriend! Anne grew up in Scotland and moved to the United States when she was 15. We were traveling through Scotland together in our 30s and one night we took a walk in a suburban neighborhood of Glasgow. As we passed people on their front stoops we called out a warm “Good evening! Beautiful weather!” Nothing. Nada. Blank stares conveying a certain incredulousness. All the sudden Anne exclaimed “oh my God, it’s happened! I’m American!” and she recalled being 15 and walking around her new suburban neighborhood of Chicago and having neighbors call out “Good evening!” and both Anne and her mother turned to each other and said “They don’t know us! Why are they talking to us!”

I saw a little video last week, where an American visitor to Canada filmed and was amazed, when taking local buses in Canada, to witness passengers all calling out “Thank you” to the bus driver as they disembarked.

I got the story! Her host in Ireland had a typical European shower unit with the small water heater on the wall and my guest couldn’t figure it out. Her host told her that she also worked in a shop on the high street so when my guest was in town she popped into the shop and while patronizing the store - I think - asked her host how to use the shower. The host later messaged her and said she embarrassed her in front of her co-workers.

How bizarre. I can’t imagine how that would be embarrassing, unless the host doesn’t want her co-workers to know that she does Airbnb rentals.
And how does that equate to “total disregard for house rules”? Or a misunderstanding?

I sure wouldn’t want to book with a host like that.

My guest said she was blindsided by that comment, too.

A very good response. How all of this translates to, “a total disregard for house rules” tells me the host is an oddball without social graces.

I’m guessing her embarrassment was from the fact she didn’t want co-workers to know she hosted guests for money in her home.