Normally I’d try to get help from airbnb but I’m having a terrible time reaching them, as are others.

We had a $100 Superhost bonus. We used it to book a VT airbnb as guests, leaving us with only $20 extra to pay out of pocket. Now VT doesn’t want anyone from our country in MA because our covid rates went up - so we had to cancel. I got the $20 back but not the $100. Do I even have a shot at getting the bonus back to use elsewhere?

We aren’t open till we get the vaccine but do love to plan little vacations (to states that will take us).

Do I even have a shot at getting the bonus back to use elsewhere?

It’s their policy to not restore it. I think someone here mentioned recently being able to get theirs restored but I can’t recall who it is. They problem is, as you mention, reaching anyone at Airbnb. Maybe try tweeting their Airbnb help feed?

Do I even have a shot at getting the bonus back to use elsewhere?

This seems to be a common complaint from hosts and guests. I’ve seen a lot of posts about booking a reservation with bonus or a credit, having to cancel the reservation and not getting it back. But as @KKC mentioned there is the occasional success reported, so it’s worth a try.

There are also a lot of posts about CS being unreachable right now. However, I have been able to get 2 different issues solved in the last couple of months by merely using the chat feature. One issue was that I needed to cancel a guest after the May 15 deadline for hosts to cancel (and I needed it to be penalty free

. The other issue was that they’ve owed me a $114 since March, a payout that was never deposited (just got it a couple of days ago

In both cases, I started chats and was told it needed to be seen by a case manager. I waited and waited and never heard from a case manager or the CS ever again. But…both issues were mysteriously taken care of, they just never followed up to tell me. I think the Twitter approach is too well-known now, it’s crazy on there. Maybe try the good old Chat approach. You could double up and do both at the same time. I think calling should be left open for hosts and guests with emergencies right now and seems fruitless otherwise.

I have never called Airbnb, I always use the message feature. I realize there are urgent issues that someone might need to call for, but seeing as how they aren’t even dealing with urgent calls now, it seems pointless to call. I can’t believe hosts saying they hold for 3 hours, that’s insane.

If you message, it might not be dealt with right away, but at least you can get on with your day.

If you message, it might not be dealt with right away, but at least you can get on with your day.

…and everything will be in writing too.

I’ve only called 3 times in 5 years. I prefer to sort it out myself.

We’ve had to call a few times. None of it was a big deal. The “worst thing” was getting them to help a bit with a guest who was not responding before check-in. It all got sorted and quickly. At the time, this seemed much better than their electronic options.

Alas, that was before the current environment and various reported issues with their CS.

I called them this week regarding a rare guest issue and was answered within five minutes. They prioritise calls regarding live bookings and bookings taking place within 72 hours.

I agree for non urgent booking, I would message them.

It’s outrageous for them not to return your credit in these circumstances.

Did you finally solve this task? Did any of the suggestions here help in any way?

I gave up. I just didn’t want to try to figure out how to get through to them.

According to Airbnb help 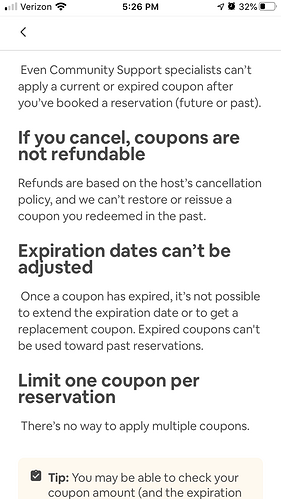 Under the search heading 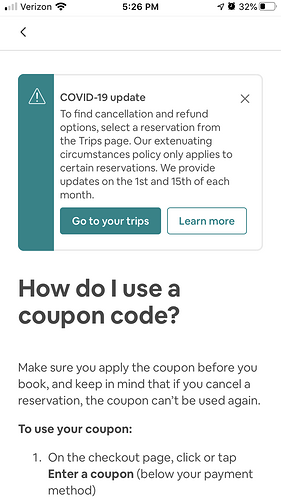 It appears once you apply a code it is considered used. The rules for coupon use don’t address getting it reissued for extenuating circumstances so the implication is you can’t

I’ve moved on. But I can’t help but add that the host said they can’t take us because the virus load in our county went up after we booked it. She asked us to cancel so we did.

Oh, well, we’ll get another bonus some day, maybe, if we ever reopen our airbnb.

Thanks, all, for the help as usual. I really do appreciate it. 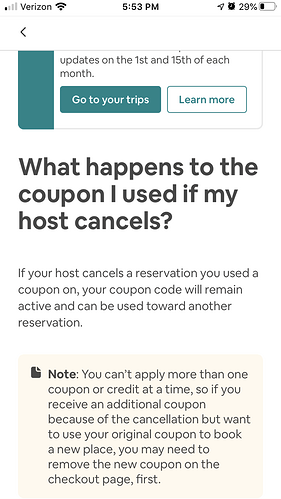 Appears that by you accommodating host’s request to cancel, you cost yourself the coupon. I hate it happened.

You may have benefited this Forum’s community by sharing your misfortune because now we all know.

The Airbnb help articles about the coupons were not easy to find and not linked to the coupons awarded to me.