Guess I missed the memo. 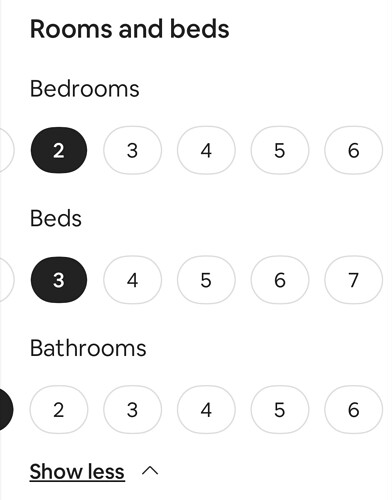 I think it’s only been made more prominent, along with the number of bedrooms. Both filters were previously further down the filter list and the number of beds only showed if you ticked a caret.

Personally, I am unamused with the new prominence of the number of bedrooms filter because there is no option for “0” bedrooms and one of my units is a studio. And ticking on 1 bedroom eliminates all of the studios from the search.

I noticed the issue when I was searching for a place where there were so many very large homes listed that I ticked on “1 bedroom” to eliminate the places that were too big for my trip. Then I realized that other guests must do the same, particularly the type (and number) of guests that would be a great fit for my studio.

The filter is also unhelpful for me - I have a 3 bedroom home but the 3 bedrooms are separate listings. Do I list 3 bedrooms or 1 bedroom?

I’d like to say.”I don’t know how I missed it,” but, I miss a lot of stuff these days

I didn’t think about studios. They clearly need a studio option. My daughter rented a “1 bedroom” in Austin recently & was bummed to find it was a studio (not sure how she missed it in the pics unless they were misleading). So clarity on that point would be good in general.

Is there a studio filter option?

I have a 3 bedroom home but the 3 bedrooms are separate listings. Do I list 3 bedrooms or 1 bedroom?

One bedroom, because that’s what each of your listings contain. That’s what your guests are booking, 1 bedroom. It doesn’t matter if you have 10 bedrooms, those other bedrooms are not for a guest’s use. No rooms that you wouldn’t picture in your photo gallery as being available to guests should be listed under rooms and spaces.

My two-person listing (lower price in the off-season than the six-person listing) still gets the whole house, and we don’t lock off the bedrooms. So I list three bedrooms on both of them.

Is there a studio filter option?

On top of it, mine is not really a studio but also not technically a 1-bedroom. There are actually 3 rooms, one more room than a studio has by definition but because it doesn’t have a separate living room it doesn’t fit the definition of a 1-bedroom.

For 4 years I listed it as a 1-bedroom, used the word studio in the title and described it as a 3-room studio-ish apt. I am not sure if there wasn’t a studio setting when I first listed it or if I didn’t understand the definitions yet.

I never had a guest mention it, complain or deduct stars for accuracy. But when Airbnb released the AirCover for Guests it inspired me to go through my listing description and settings and noticed it. Not wanting to have to refund a bunch of $$ for being inaccurate to an enterprising guest caught up in details, I thought of changing it to studio because it doesn’t fit the 1-bedroom definition but I didn’t.

However, a couple of weeks later, I was looking around at listings and saw that a host near me got slammed in a review for calling her studio a 1-bedroom. And she mentioned in her response that the guest had received a refund on top of it. Her studio/1 bedroom also has an extra, third room like mine does. So that was one too many messages from one universe for me so I changed it.

Right now it’s okay but if I get desperate in the winter, I may change it back to 1-bedroom. And when I get bit, I’ll come on here and let y’all ream me for it

And when I get bit,

Just make sure to ask them when they book if they understand the layout. If they don’t reply cancel as “not comfortable.” Or yeah, just absorb the hit. At least if someone complains in a review that’s another chance to inform potential guests.

Or yeah, just absorb the hit. At least if someone complains in a review that’s another chance to inform potential guests.

That is so true! Besides, that other host is kind of a clown. She probably messed up in other ways too.

Well, I have a goal I’m about to meet or miss (because some days I really need the carrot, lol). After I meet it (or fail) in the next week or so, I’ve made a conscious decision not to set another goal. I may just go completely rogue

There are actually 3 rooms, one more room than a studio has by definition but because it doesn’t have a separate living room it doesn’t fit the definition of a 1-bedroom.

Is there some official description of a one bedroom, that it has to have a separate living room? I don’t know your layout, but it would seem to me that 1 bedroom would mean there is a bedroom door that can be closed for privacy. What is outside that bedroom shouldn’t really matter- living room, kitchen, den, etc. At least that’s what I would consider a 1 bedroom if I were a guest. Like one person could sleep with the bedroom door closed, while the other cooked, talked on the phone, or watched a movie without disturbing the sleeper.