Novel response to an unfair review

I recently received 3 stars overall from a guest whose public review cited lack of sufficient heat. It was an unfair review, since guests can adjust the unit’s two heaters to high heat, with complete instructions that are easy to find and understand. Based on threads on this forum discouraging public responses to bad reviews, I said nothing. When the subsequent guests were leaving, I asked them if the heating was OK, and they gushed about how great it was during our rather cold winter nights. When I mentioned that I was checking with them due to the previous guest’s problems with heat, they were flabbergasted, which resulted in their decision to include heating as a plus in their review. That in turn gave me the opportunity to chime in with my own boasts about heating. Under the reviews section of my listing, both those comments now show up immediately prior to the earlier guest’s complaining review, which justifiably undercuts that review’s credibility. Here’s how the sequence now shows up in my listing: 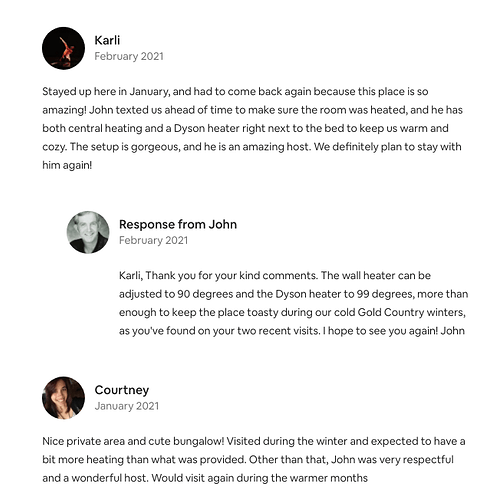 I’m surprised to hear you say you didn’t leave a response because you feel people on these forums say not to respond bad reviews. @jgw_jgw

Personally I respond to all my reviews a) if someone says something nice I like to acknowledge it. B) if something is incorrect as in your case it’s an opportunity to address the issue for future guests. Simple, factual and to the point. Is the way to go.

Helsi,
Following is the type of exchange I’ve seen endlessly in this forum.
JGW 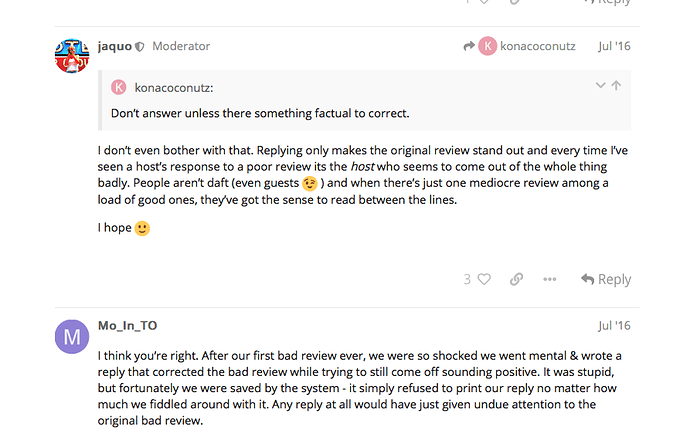 There’s some great advice in this forum from experienced and new hosts. There’s also quite a bit of incorrect information posted by inexperienced hosts.

The important thing is to sift through the wealth of information taking note of what feels right to you.

It’s important for readers to understand why members say what they do. We all respect and understand each other’s opinions even if we don’t always agree with them.

Good Job. Well done. I agree with you and I also do not respond except when necessary.

@jgw_jgw The thing is that many hosts do themselves a disservice by responding to a bad or lying review because they don’t understand the purpose of leaving a response nor how to write one.

You so often see host responses that are long rants, addressed to the guest, defensive, aggressive, and so on. Or responding to things that weren’t mentioned at all in the review, but in private feedback or during the guest’s stay. Or reads like a review of the guest, not a response to the review.

A response to a bad review should be brief and unemotional, only address what is stated in the review, used to correct misleading statements for the benefit of future guests, and not addressed to the guest who left the bad review.

And if the guest has left an unhinged review, ranting on and on like a nutcase, and you have pages of great reviews, it’s probably best not to respond, as their review will just look crazy to future guests, anyway.

A response like “This is a retaliation review resulting from the guest being asked to pay for extensive damages (or whatever the case may be). Please refer to our other reviews for an accurate picture of what to expect when booking our listing”, is adequate if you feel the need to respond to a review full of lies.

I haven’t seen ‘endless hosts’ saying you should never leave a factual response to an inaccurate review . @jgw_jgw

It only looks out of kilter if you don’t normally respond to your reviews .

I’ve made no reference above to “endless hosts.” However, I’ve endlessly seen exchanges, at times including moderators, discouraging hosts from responding to negative or inaccurate reviews. Though these exchanges haven’t been the sole opinions expressed on the topic, I’ve found them to be compelling and dominant. Some representative examples follow. 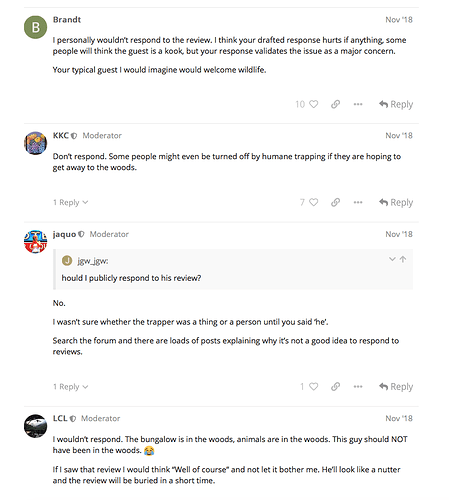 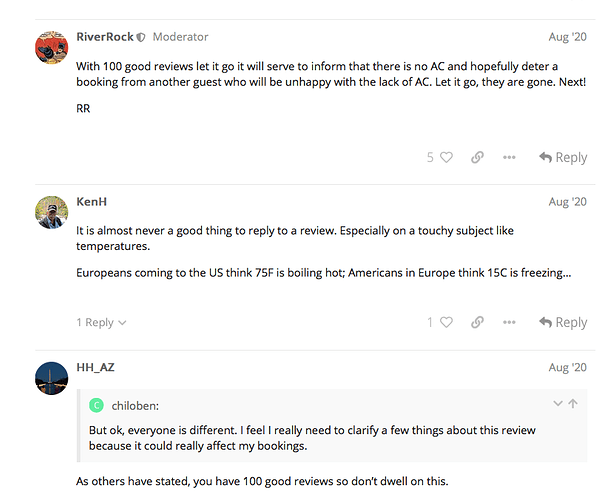 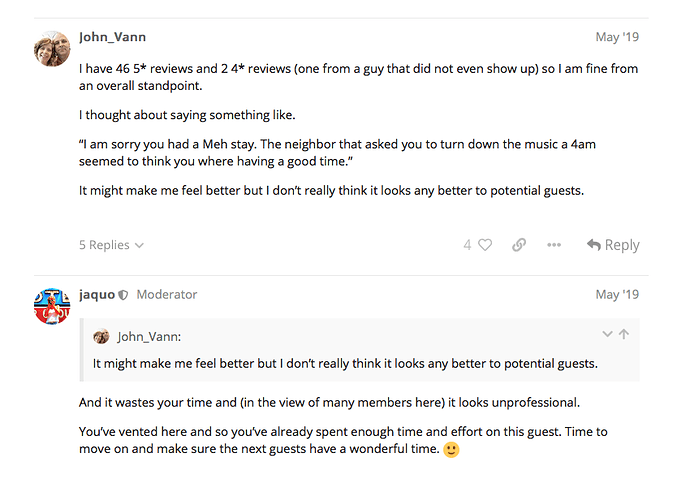 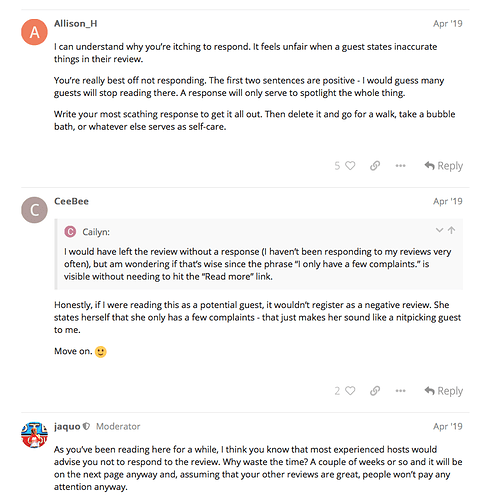 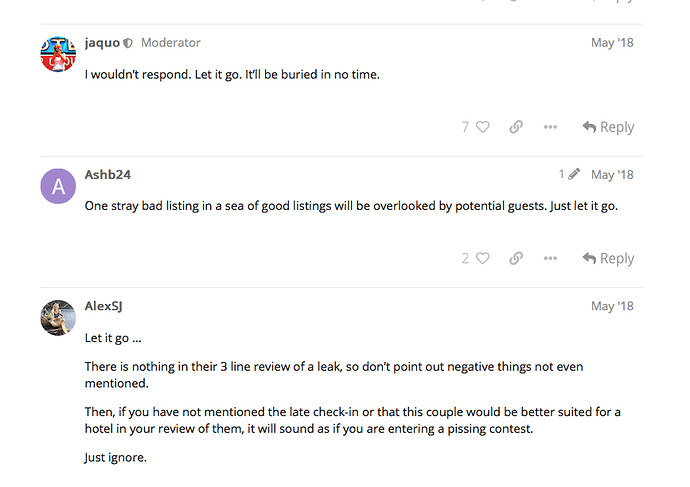 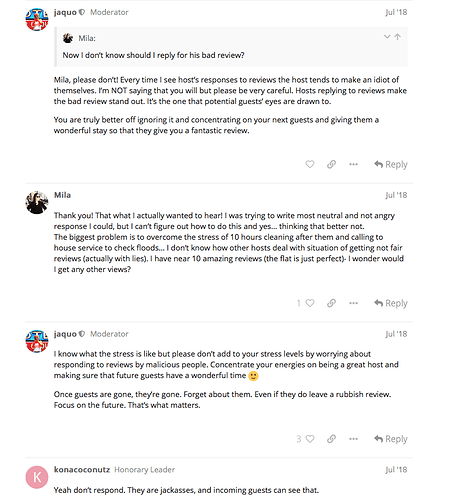 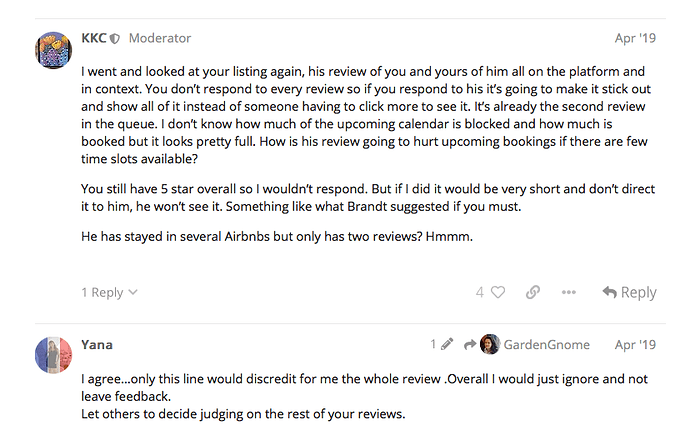 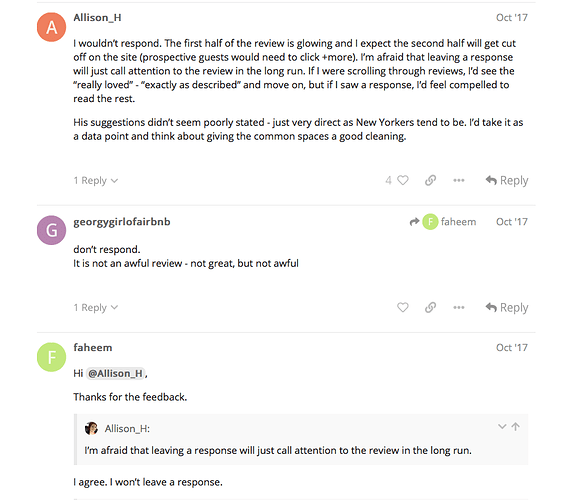 @jgw_jgw Almost every post you quoted above has to do with advising a host not to leave a response to a specific review. Because although the host saw it as a negative review, it really wasn’t, or because the review said more about the mental state of the guest (a crazy ranter) that no one would take seriously and should be ignored, because it pointed out a legitimate complaint, and so on.

And because many hosts have no idea how to write a response which benefits themselves, but is instead an aggressive attack on the guest, or a defensive response, as if the host believes they and their listing is perfect and they can’t handle any criticism.

Some hosts say they never leave a response, but no one said that it’s something a host should never, ever do. A brief, non-emotional response to clarify misleading statements for future guests is sometimes warranted, but it isn’t necessary for a host to respond to anything not glowing that the guest had to say.

My original statement was: “Based on threads on this forum discouraging public responses to bad reviews, I said nothing.” Helsi found fault with that statement. I stand by it.

I recently received 3 stars overall from a guest whose public review cited lack of sufficient heat.

I was checking one of our BDC listings and one of the “highlighted” reviews was from a couple of Russian girls who stayed with us a while back. They were here in January and despite being closer to the Sahara than Madrid, it’s still bloody cold here at that time.

They were here for four nights and not once did they use the heating. We can tell, because the inverter units are mounted high up in the patio and it’s obvious when they are running. They’d mentioned that it was something like -25C in their city when they checked in and we showed them how to use the AC units on heat mode, so we just assumed they were hardy souls and that our 5 or 6C at night was fine for them.

Review time… 10’s across the board and nice comments for the green smiley face, but under the red unhappy face the comment was along the lines of “the apartment gets very cold at night”.

At that time I rarely responded to BDC reviews, but made an exception this time and pointed out that they hadn’t actually used the heating. It probably made them feel a bit silly, but hey ho, don’t want folks to think our heating doesn’t work, I mean you do have to actually turn it on!

That’s a good example of a review that can benefit from a response. Not calling the guest out for being clueless, but just to correct something future guests might believe.

For the record, nowhere above have I personally asserted that hosts shouldn’t respond to bad or inaccurate reviews, and that isn’t even the point of my original post. The anecdote that I provided at the top of this string simply provides a novel alternative. I posted it because I thought others might find it amusing, instructive and/or helpful, nothing more.

A response to a bad review should be brief and unemotional, only address what is stated in the review, used to correct misleading statements for the benefit of future guests, and not addressed to the guest who left the bad review.

Yes, that is what we do too. We are always afraid that we are too loud since the quest are in the basement but happily surprised that problematic guests only complain about being cold :). So we reply in the lines of " We are sorry you did not turn on the heater that is available in each bedroom of the apartment and mentioned in our house rules on the wall." I have also seen really one host replies that are twice the length of the bad review and really attacking toward the guests… so we reply after we calm down a bit for a few days and compose it on a paper before posting the final :). We have three kids running around and not even the worst quest complain about the noise … it is a wonder

I agree with responding. Especially as those of us who care and take interest in the guests comfort, we want to know why they are displeased. I had one young couple show up with a brand new baby. And, they had booked months ahead saying there would 2 of them. We had to arrange to get them a crib, etc. They bitched that the A/C was too cold, or some such thing (they had the remote!). They left the place filthy. Mom had been changing diapers on the living room sofa and there were stains there. They left garbage…the whole 9 yards. I responding, but I was still kind. What we have to endure is no one’s business. I think we are automatically branded ‘unsavoury’ when the websites are telling people they will cover them, keep them safe…meanwhile they don’t seem to understand that this security is costing them an extra 300!

Nowhere above have I asserted that hosts shouldn’t respond to bad or inaccurate reviews, and that isn’t the point of my original post.