My sympathy to our Texan and southern US members

My sympathy to the Texans in this group. I see headlines today that even San Antonio got hit with snow last night. I know we shouldn’t, but Alaskans always laugh when snow hits areas in the Lower 48 that rarely get it, and schools shut down when there’s an inch of snow.

We had a foot of snow 10 days ago, and since we’ve had temps from 0-15 degF and 60 knot winds, so when I see FB posts from folks who don’t normally experience snow about how everything is shut down, 70 vehicle crashes in Dallas (must be that horrible northern interchange!), and other snowy weirdness, Alaskans just trot out our Snow Wimp memes (and we have a lot of them) and keep on driving on our studded tires with 4WD: 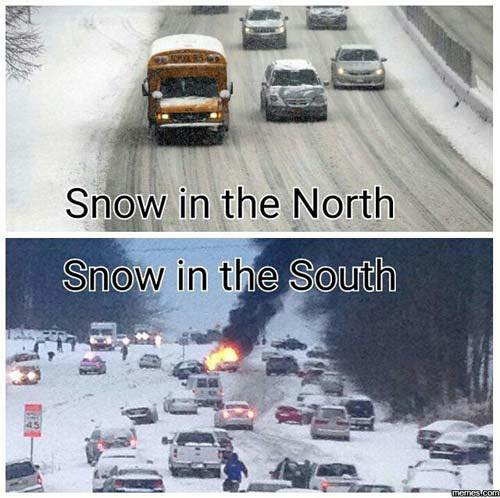 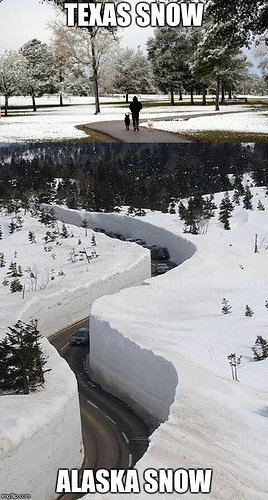 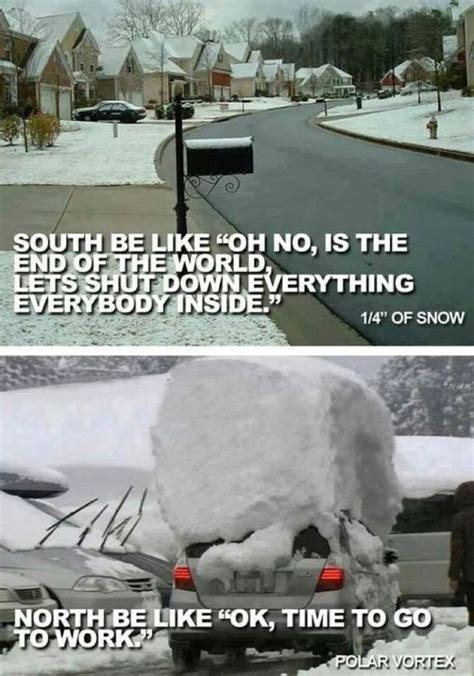 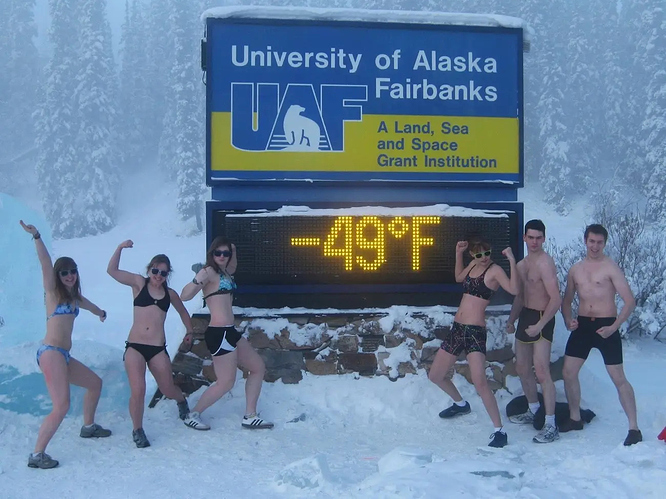 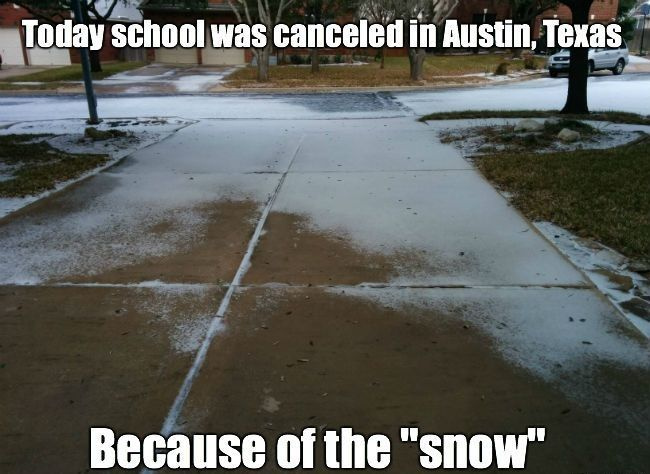 Last week with just a little ice we had a 130 car pileup that killed at least 6 in Fort Worth. And that was just 1 accident. The thing is, we aren’t prepared for ice or even a little snow (and we already have 3" today). Normally, we just wait until it melts for the most part. But whatever we have now will stay here for at least a week where I am at as it’s going to stay below freezing that long. For the ENTIRE state there is only 2000 pieces of snow/ice equipment. I heard that’s 1 piece for every 350,000 residents. I spent 45 years in the Northeast and I know snow, and ice and sleet etc. There’s no way we are going out on the roads for at least a few days.

When I lived on Vancouver Island, which didn’t usually get much snow, it always cracked me up how drivers seemed to think that all traffic laws were suspended when it snowed, sliding through stop signs, etc, because they were terrified to use the brakes and no idea which way to turn their wheels if they went into a skid.

I grew up in the Midwest prairies and my dad taught me to drive when I was 16, in all kinds of weather.

I see the same kind of thing now here in Mexico, except it isn’t snow, but mud in the rainy season. Mexicans will step on the gas if they get stuck, digging themselves in deeper and deeper up to the axles, til they have to phone a buddy to come pull them out.

Thank you so very much. We are in the Rio Grande Valley which was in the 80’s last week. It will be the lowest temperature ever here tonight, 23 degrees. The fruit crops will be destroyed. The saddest part is the poor people in The Valley have homes with no heat and some with plastic for windows. Knowing others care about the south Texans warms my heart…and cold feet.
Lisa

Now I’m from Yorkshire and @JohnF is from Scotland so we really know what snow is.

Here is South Florida we have the opposite going on. When we have a cold spell (under 70 degrees) we bundle up in coats and scarves and gloves and boots and chuckle at the northern tourists in their shorts and tshirts.

Washington DC metro area always gets made fun of too. I read a paper (it was real research!) that the snowy road conditions here are more “slippery” than up north due to generally higher temps. Don’t know how they measured that, with some friction instrument. Also snow clearing budgets and equipment are geared to the average.

I grew up in Pittsburgh, so I learned to drive in the snow. But snow tires aren’t cost effective here; not used enough.

One year I cut it too close leaving work; I made it out of DC but cars in front of me could not get up a long slope on an outward bound VA route. I got the last available hotel room at a nearby Marriott. I had dinner at the bar and lots of drinks with military-ish types who had just returned from some mission relating to diamonds in Zaire. I was afraid if they realized how much they were telling me, they would have to kill me!

We see that here, you can always spot the tourist out of season, they’re the ones NOT wrapped up to their noses when the temp goes below 15c!

A few years ago we were in Málaga for the turning on of the Christmas lights. We’d just come from Dundee where it was minus feck knows what, to, in our opinion a nice balmy evening in Andalucía.

I was happy sitting in a terrace enjoying a drink and a bite to eat in nowt more than a T shirt. I was a bit amused at the locals who were passing by with coats, scarves, hats and gloves.

It was around 21c this evening, and while standing outside my local bar I had a 1/4 zip microfleece over a thick T shirt, topped by a down bodywarmer and a scarf… acclimatised or wot!!!

we have a cold spell

Watch out for Falling Iguanas!!

chuckle at the northern tourists in their shorts and tshirts.

Here too. And they go swimming in the ocean!!! Brrrrrrrr

Phoned my daughter on Vancouver Island last night. She and her boyfriend were having a romantic Valentines Day evening by candlelight in the igloo they’d spent the afternoon building.

Evidently we ware going to get hit with ice tonight on top of the snow we already have. Roads are not cleared. Highways look like they have maybe 1 lane cleared in each direction here.

@KKC how are you in El Paso? Electricity on?

I was happy sitting in a terrace enjoying a drink and a bite to eat in nowt more than a T shirt. I was a bit amused at the locals who were passing by with coats, scarves, hats and gloves.

Ah, but ye’re a bra lad whose ancestors hunted wild cattle in the wintertime wearing not much more than a filleadh mòr!

Yes. Things are okay in El Paso. First and foremost we aren’t on the same grid as a big chunk of TX. 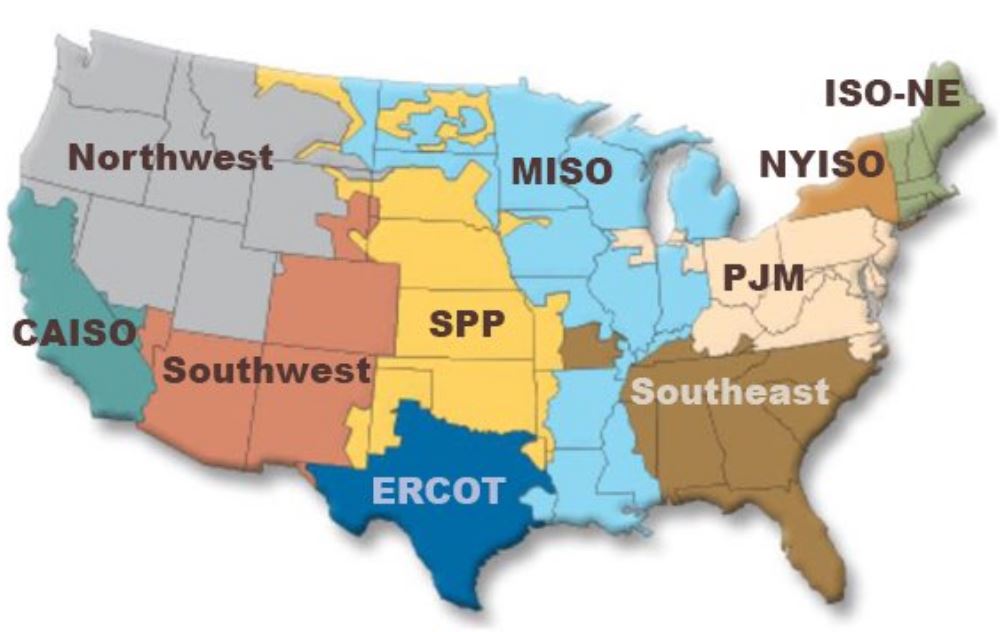 There are political reasons for some of the problem and I’m seeing some speculation on twitter about price manipulation by energy traders. In other words, like usual, the rich are going to get richer while people literally freeze to death in the dark. Between covid and this mess hopefully we will get some new leadership in 2022.

Many of my friends across the state have reported no power. The only ones I’m seeing who have had steady power live in the well off parts of Houston.

Also it’s been warmer here in El Paso. Our overnight low was 14 and it’s now 31. Central TX is lows in single digits. Our high is supposed to be around 50.

But it’s pure misery for so many. No heat, frozen pipes, leaks, and so many other things made difficult by the pandemic and weather.

The Northwest is really good at rain but bad with heat.

Southern California is really good at wind, fire and earthquakes but really bad with rain.

The Northeast is really good at snow and ice but bad with wind and heat.

Texas is really good at lightning, floods, wind, high heat, hurricanes, tornados and drought but bad with snow and ice.

I’ve got friends and family that have only had power for maybe 2 hours in the last 36 hours. One of them is out in the country and can’t get to town because of the little roads are covered with ice. All of their water comes from a well. It’s an electric well

They are some of many that slept in a car or van last night to keep warm. And sewers are failing and backing up as well. It’s a friggin mess.

@JJD, I’ll take your word for the parts of the country you mentioned. I’ve lived in the Midwest all my life. People here complain every summer about how hot and humid it is and that they can’t stand it. They complain every winter about cold and snow and that they should move south. I think there’s about a week in the spring and the fall when they’re contented with the weather. Otherwise, all they do is complain.

Haha- the same thing happens in Canada. When the winter drags on into spring everyone complains “Is it ever going to be summer?”

Then the first nice hot summer day they’re all “OMG, it’s so hot, I wish it would cool down”.

When the winter drags on into spring everyone complains “Is it ever going to be summer?”

I think that is true of everywhere. Except for L.A. where it’s almost always perfect everyday - room temperature with a blue sky. But then people complain about how boring the weather is there, so there’s no winning with the weather.

In all honesty, Texas is too hot, Oregon is too wet, New York is too cold and California is too much the same all year long.

I think that is true of everywhere.

Oh a definite for Spain. I can spend 15mins talking about the weather with the waiter in my local bar before even thinking about discussing anything else. Too hot, too cold, too wet, too dull, and so on, and so on.

I taught them a Scottish word “dreich” a few weeks ago, which essentially means cold, grey and wet. We’re still practising it, but now the sun has reappeared we’re losing the chance to use it.

According to several of my friends who’ve been here for twenty years plus, in Jerez discussing the weather, either current or forecasted, is almost a ritual and if asked your opinion on the weather, it is considered extremely rude if you don’t then engage in a discussion relating to it.

My record is almost an hour of both D the waiter and I bitching about the heat last August, it’d hit around 46c that day.

a Scottish word “dreich” a few weeks ago, which essentially means cold, grey and wet.

I have very few complaints about the weather in El Paso. It suits me very well. But I won’t go on and on about it so as not to ruin anyone’s bad time.