I have an entire house listing on AirBnb in London and therefore subject to the 90 days listing limit. I have 10 days left for 2017.

I’ve spoken to my local authority and they say they have no issues with me hosting on AirBnb so as long as there are no nuisance complaint made by the neighbours, they currently do not have a policy on Airbnb hosting and have said no planning permission is required.

I have contacted Airbnb and told them this. I sent an email to them almost 3 weeks ago and their legal team has not responded. They ask for documentation proof in order to lift the limit, but then dont say what kind of documentation. Im getting nothing back from Airbnb. Its ridiculous! At this rate, Airbnb will lose all their London listings to alternative sites such as flipkey.

Has anyone else had problems with Airbnb removing this 90 day limit? Has anyone actually obtained a change of use planning permission?

I don’t quite understand. I thought that the 90 day thing was a London regulation for whole house rentals and that Airbnb are just following the law? Please let me know if I’m wrong

There has been legislation existing for sometime prohibiting short term lettings in London - it’s just that many Londoners with whole lettings ignored it. This was introduced to help ease the terrible housing shortage we have which is pricing many with low income out of the Capital.

In 2015 legislation was introduced to improve the situation for short term let landlords and allow those with whole home lettings to let for 90 days a year without planning permission.

All BNB are doing (at last) is reinforcing the legistlation.

As your council has confirmed you don’t need planning permission, just get something in writing from them as BNB have requested and submit to them.

In 2015 legislation was introduced to improve the situation for short term let landlords and allow those with whole home lettings to let for 90 days a year without planning permission.

So all @sniper786 has to do is get planning permission or some sort of licence? That seems straightforward enough.

Another thing I’m confused about is why I keep reading about hosts who expect Airbnb to fight local legislation. It’s not that ‘Airbnb is banned’. These laws are preventing short term rentals in entire properties no matter what platform or advertising method is being used.

Well not even that…

In some boroughs in London you need planning permission. In others not,

@sniper786 says he has checked with his council and he doesn’t need planning permission, so all he needs to do is get that in writing and submit to BNB and then he can exceed the limit to his hearts content

Yep as@Helsi says, as long as the council will put down in writing that they don’t give two figs then this can be passed on to Airbnb. My guess? That they won’t put that down in writing as it effectively changes the purpose of housing from residential to commercial. No council would be stupid enough to think there wouldn’t be a backlash from that.

Shame really. So the council will look the other way but won’t provide the necessary planning permission or authorisation for a host to be above board. I can’t see how that’s a good situation for anyone.

My thought having worked for a London Council, is that they will have had to agreed this somewhere either as part of a paper that has been considered by the Cabinet or on an officer’s authorisation, which will need to be recorded.

I can’t see a reason that they wouldn’t put it in writing, if this is an agreed policy. Many Council’s clearly outline their policies around this on their websites. For example - here is Camden’s.

If they say they are happy for short term lettings to exceed 90 days but won’t put it, in writing @sniper786 can complain. The Council will need to consider a response and put it in writing.

He can then use this.

I don’t understand your point @Helsi. That link appears to confirm what I said in my post … that councils are unlikely to approve planning permission.

Oops sorry I should have been clearer - I posted the link in line with my comment to show that councils do tend to post their policies around this on their websites.

Ah gotcha! But I can’t believe that a council would officially say they don’t care; the ramifications are too huge.

Yes I was surprised when the OP said his council had told him they were happy for short term renters to rent out whole properties without planning permission.

Yeah imagine the ripple effect. And since it’s a law that councils need to enforce … pretty incredible that they’d be ‘not bothered’, I didn’t think that was how legislation worked

. But assuming they’re really not bothered, like you already noted the council should be willing to put it in writing. 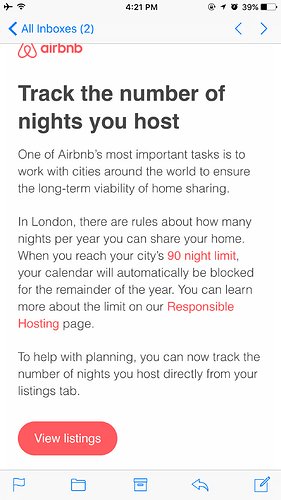 Didn’t get that email, I expect because I don’t list a whole property.

Neither do I … I think it applies to both!

It only applies to whole property listings. Airbnb are not limiting live in hosts to 90 days.

Where do you live in the UK @Kirsty_Jane?

What a lovely area.

I’m surprised you received this notification, particularly if you don’t let out a whole proper…I can only assume it must have been in error.

I am fascinated in hour are the “authorities” going to track this…Air says 90 days - close your calendar down…is every site going to track you? Are they going to be asked to send in a report saying days rented / actual days booked?? Are the council going to hire an enforcer? Some one cancels - is your calendar pended up to allow you to re let those days…the logistics are mind boggling…
Very monty pythonesque - you rented your flat, no I didn’t , yes you did…